Millions of people around the world could be lifted out of their daily hardship and misery if the money lost to corruption was invested in sustainable development. Every year an estimated $1 trillion of illicit financial flows leave developing countries in the form of tax evasion, embezzlement, bribes, money laundering and smuggling.

That's why Sustainable Development Goal (SDG) 16 focusses on delivering justice, stopping illicit financial flows and ending corruption and bribery. It shows that world leaders have finally recognised the devastating effects corruption has on good governance and development. It is the poorest and most vulnerable that suffer most from corruption in our societies.

Transparency International's research has demonstrated that widespread bribery is associated with higher maternal mortality rates and more children dying before they reach the age of five. Half of school children do not complete primary school in countries where bribery is common. In the poorest countries, one out of every two people has to pay a bribe to access basic services like education, health and water. 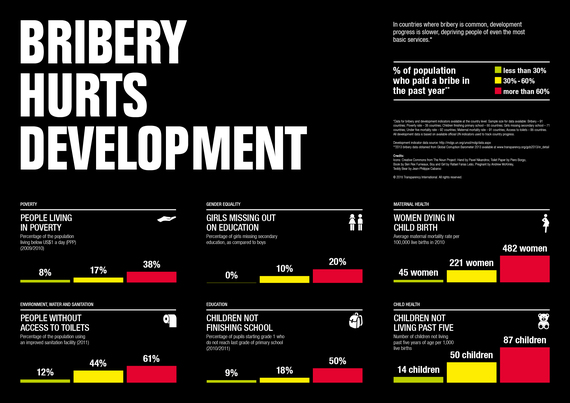 So where are we now? We are a long way from the times when corruption was the word that was never spoken in the corridors of power. Today it is almost impossible to open a newspaper anywhere in the world without reading about a grand corruption scandal, be it on the Brazilian state oil giant Petrobras and the powerful construction companies or the former Ukrainian President Viktor Yanukovych.

The fact that corruption is so omnipresent in the news gives an idea of the huge amount of corruption that affects the world today, but is also a sign of progress. It shows that brave investigative journalists, courageous prosecutors and anti-corruption activists around the world are uncovering corrupt networks and want to change the system.

Yet there is still too much impunity for corruption. In today's ever-more connected world, the corrupt can move stolen public funds often with a single keystroke. They can start secret companies and use them to buy expensive properties and luxury goods. The Panama Papers showed just how easy, widespread and devastating this can be.

We urgently need all countries to require much higher levels of transparency so we know who owns and controls companies registered in their territories. We need to sanction the professionals - the lawyers, the estate agents, the bankers and the accountants - who look the other way or even enable corruption.

Countries need to work together to make this happen. To fight transnational crime, international cooperation on investigations, prosecutions, and anti-corruption legislation is essential. That's where the SDGs, the international community, the United Nations and civil society should come in.

On the one year anniversary of the SDGs it's time for everyone to do the math on solving the problem of poverty and inequality and to take action on corruption and organised crime. Policies for development and policies for anti-corruption must finally be one in the same.

We - as citizens and as civil society - need to be able to hold our governments accountable to their commitments. Too often the data presented by governments to the United Nations is biased or does not show the full picture, as we have clearly seen in the case of Venezuela. This proves the importance of having an active and engaged civil society that is given space to monitor government commitments.

We need to make sure that the right indicators are used to monitor and measure progress on all fronts and across all countries. We need participatory channels to measure progress (or lack thereof) on introducing appropriate laws to fight corruption. We need to protect the victims and witnesses of corruption by insisting on safe mechanisms to report it.

Ultimately, the only way to judge the Sustainable Development Goals' success, is for people around the world to feel that their lives have markedly improved. If they are faced with corruption in their daily lives this will not happen.

The barometer of the success of the SDGs will be the number of real people, living real lives, who say that they are not asked for a bribe, that the courts treat them fairly and that those who are found to be corrupt are punished. When kleptocrats and their enablers stop looting the states affecting the poor, then sustainable development will be a reality.