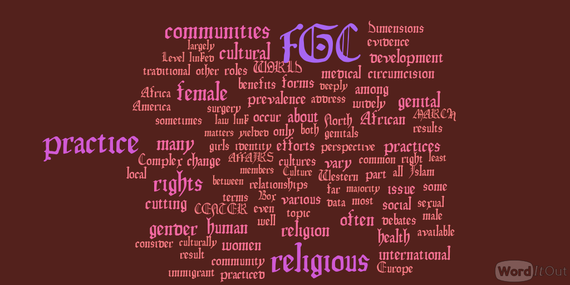 Since 2012, February 6 has been marked each year as the International Day of Zero Tolerance for Female Genital Mutilation. This reflects a wide global consensus that the ancient practice of cutting female genitals is a patent violation of human rights and human dignity. Indeed, in December 2014 the United Nations General Assembly adopted Resolution A/RES/69/150 that "urges States to condemn all harmful traditional practices, in particular female genital mutilation". The resolution calls on governments to "develop, support and implement comprehensive and integrated strategies for the prevention of FGM including training of medical personnel, social workers and community and religious leaders to ensure they provide competent, supportive services and care to women and girls who are at risk of or who have undergone FGM."

Yet figuring prominently among the commentaries this year are reports that the number of girls affected is much higher than previously thought: nearly 70 million girls and women more than estimated in 2014, a total of 200 million women and girls worldwide, in different world regions. Population growth explains some of the higher estimates but so does new reporting, especially from Indonesia. Despite the powerful consensus that FGC abuses children's rights, is a long outmoded patriarchal practice, and has no benefit whatsoever in medical terms, the ritual is stubbornly persistent. Why?

Few topics illustrate so well how hard it is to disentangle culture and religion. Historical research and the wisdom of anthropologists demonstrate clearly that FGC has ancient origins. That would argue that culture is what counts since FGC predates even the earliest Christian and Muslim communities. And the issue has clear non-religious justifications: it is worth remembering that the practice was not uncommon as recently as a century ago in the United States and Europe, seen as a cure for women's hysteria or nymphomania.

However, many believe that it is religious beliefs and teachings that account for or at least perpetuate a practice that seems so horrifying. Because it has long been associated with Christianity and Islam, countless religious scholars and leaders have taken great pains to argue that it has no religious roots or justifications. However, others do condone it. Most important, the women who actually do the cutting or parents who insist that their daughters be cut often explain the practice in religious as well as cultural terms: it is, they argue, about purity and it is an integral part of a community's traditions. An argument often advanced is that a girl who is not cut is shunned when it comes to marriage if that is what her community expects. Outside intervention on the topic is often greeted with anger, seen as an unwanted imposition. Laws and UN resolutions do not seem to make much difference; far more effective are the patient efforts of advocates within communities who approach the issue with understanding and respect.

Casting the issue in spiritual and cultural terms can obscure the raw issues of power that are involved: the core argument that FGC is designed to control women's sexuality by curtailing their sexual desire. Men, prominently, serve as religious leaders. Thus FGC is linked to questions about women's rights within religious communities and to their sexuality. An important question is what religious leaders do and could do to speed the end of the practice.

And the answer is: a lot. First, religious leaders have shown leadership in condemning the practice. Islamic scholars have roundly condemned the practice, as have Christian leaders.

The annual day devoted to ending FGC is heartening evidence of international concern for girls and their rights. It highlights a consensus of very different actors, technical, human rights advocates, and religious leaders in this instance. However, far more is needed to speed the transition that brings communities to end the practice. Religious leaders are needed partners here. As they address this practice they need to address the complex attitudes that perpetuate it, notably the assumption that women need to be controlled. We need to break the taboos that surround sexuality, in an honest dialogue that respects cultural rights and norms but, as Kenyan Christian leaders noted in a 2014 discussion of the topic, accepts where they need to change. They cited Isaiah 43: 18 "Forget the former things. Do not dwell on the past", and agreed that social transformation over time is expected and necessary so as to leave behind cultural practices that are no longer necessary.