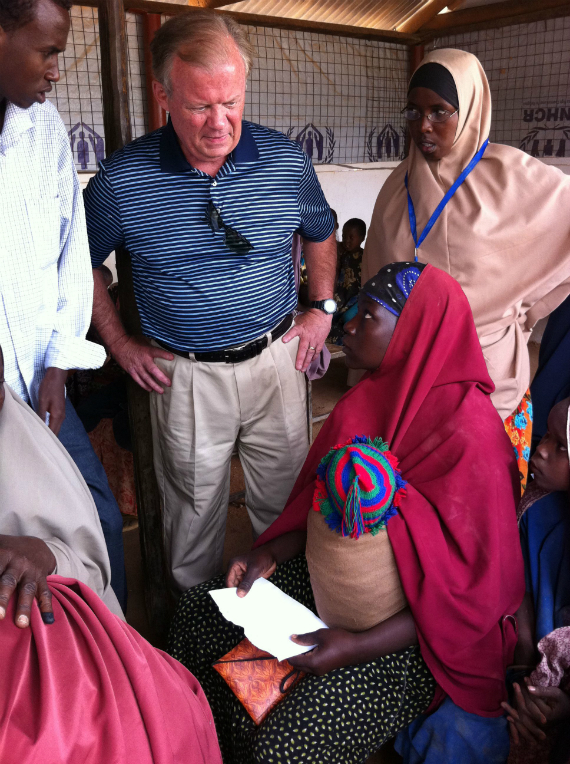 We can end hunger in the United States and around the world by 2030. This may sound like a rather fantastic and unobtainable goal to some, but in my years of tackling the issue of hunger as a Congressman, Ambassador to the UN food and agriculture agencies, and head of an anti-hunger advocacy organization, I have become more and more hopeful. My most recent optimism comes from the shift in global-development guidance from the Millennium Development Goals (MDGs) to the post-2015 Sustainable Development Goals (SDGs). The SDGs have the potential to end global poverty and hunger, and help us work toward a more just and sustainable world. Introduction of the SDGs has spurred conversations about shared prosperity, economic growth and increased opportunities, both at the individual and collective level. Moreover, these goals hold every country accountable toward ending hunger and poverty. Sustainable development is no longer a goal exclusively for the world's poorest countries -- it is now a universal responsibility for all of us.

Inclusive Engagement Around the World

I travelled to the Dadaab refugee camp in 2011. For those of you unfamiliar with Dadaab, it is currently the largest refugee camp in the world, hosting more than 333,000 Somali refugees who have fled their homes since Somalia plunged into turmoil in the early 1990s. While at Dadaab, I met with countless individuals who had spent years at the camp, and even a few children who had never known another home. At the time of my visit in 2011, I saw entire families emaciated, as well as women who had fled for their lives and faced the unimaginable choice of which child to save and which to leave behind. The sight is enough to discourage those who dedicate their lives to assisting some of the world's most vulnerable people.

The images and stories are also enough to distract us from the fact that we have made tremendous progress -- pushing the world's hungry population substantially, from over one billion people down to 795 million. But the people I met in Dadaab are still a part of the 795 million. Now that the Dadaab population is beginning to repatriate with mixed success, and crises in places like Yemen, South Sudan and Syria continue to provide challenges, we need to focus our energy on how to reach the most vulnerable of food-insecure individuals. It is my hope that the Sustainable Development Goals will help accomplish this, but it will be a challenge.

SDG 2 outlines a very clear agenda: end hunger, achieve food security and improved nutrition, and promote sustainable agriculture. Toward these goals, the U.S. Government's Feed the Future Initiative has presented some success through bolstering the importance of partnerships -- including government-to-government and cross-agency coordination, impactful NGO partnerships and promising private-sector engagement mechanisms such as the New Alliance for Food Security and Nutrition. With a specific focus on the smallholder farmers who make up the majority of the agricultural population in developing countries, Feed the Future has already provided improved technology and agricultural practices for more than seven million farmers in 2014 alone, and reached more than 12 million children through nutrition interventions to prevent stunting caused by under-nutrition. With 75 percent of the world's poor living in rural areas, and a vast majority of these people in agriculture, initiatives targeting this sector are critical.

But there is room for improvement. Particularly crucial to meeting the goals of SDG 2 is the involvement of civil society in policy processes. Indigenous civil society groups are in-tune to needs of the most vulnerable. Women specifically need more seats at the development table, as they prove to be more disadvantaged than men, but also provide a tremendous opportunity to reach a marginalized population and improve nations' food-security situations. Development that is inclusive and locally-owned must be the end game to achieve the goals of the SDGs.

Parallel Responsibility in the U.S.

Understanding the universality of the SDGs is significant when considering hunger in our own backyard. While not as profound as the hunger I witnessed in Dadaab, the U.S. is home to an estimated 49 million people who live in households that struggle to put food on the table. This has led to astronomical economic loss totaling an estimated $165.7 billion a year due to lost productivity and avoidable health-care costs, among other factors. SDG 2 presents a forward-thinking but complex combination of sub-goals that add up to a food-secure society. In the U.S., these sub-goals (addressing types of malnutrition, sustainable-agriculture practices, addressing market issues, etc.) will necessarily affect different regions of the United States in different ways.

Universities are taking steps in the area of tying local and international food-security together. Through the dedicated leadership of Auburn University's Hunger Solutions Institute, university presidents around the world are mobilizing to make ending hunger a priority on their campuses, in their communities, countries and across the globe. The Presidents United to Solve Hunger (PUSH) initiative encourages schools to commit to "teaching research, outreach and student engagement" related to hunger issues. The PUSH initiative capitalizes on the recognized power of collective action to combat hunger both domestically and internationally, and recognizes the universality of SDG 2.

We can end hunger by 2030, but it won't happen on its own. We need to be diligent and proactive in forming strategic partnerships that are sensitive to both universal and context-specific needs, and are inclusive of historically marginalized groups. This rings true as we tackle hunger at home and around the world.

This post is part of a series produced by The Huffington Post, "What's Working: Sustainable Development Goals," in conjunction with the United Nations' Sustainable Development Goals (SDGs). The proposed set of milestones will be the subject of discussion at the UN General Assembly meeting on Sept. 25-27, 2015 in New York. The goals, which will replace the UN's Millennium Development Goals (2000-2015), cover 17 key areas of development -- including poverty, hunger, health, education, and gender equality, among many others. As part of The Huffington Post's commitment to solutions-oriented journalism, this What's Working SDG blog series will focus on one goal every weekday in September. This post addresses Goal 2.