Eight young Tibetan students living in India set out to do something seemingly impossible: provide an entire slum community with access to clean water.

These students, led by 18-year-old Tenzin Loden, were inspired by a budding campaign called One Billion Acts of Peace to do something of service in their community. Personally encouraged by the Dalai Lama, they chose, heroically, to solve one of the biggest and most intractable problems facing their community: water. A nearby slum had no access to clean water. Sanitation was very poor, disease was a major problem, and the local children had to spend hours getting water from far-away sources, which meant they could not receive proper schooling.

It was a daunting task even for adults, much less for a group of teenage students. First, they had to navigate the notorious Indian bureaucracy, then they had to procure pipes and water containers (which, it turned out, had to be purchased and shipped across India). They had to install everything, and of course, figure out how to pay for it all. They set out to solve the problems one at a time. They were unable to convince the local water authority to do anything, but were so sincere and persistent that the water commissioner himself agreed to help unofficially. They solicited donations from a group of Westerners visiting the Dalai Lama. They spent 15 hours digging trenches to lay the piping and many more hours assembling and distributing water containers.

Thanks to these eight teenagers, 144 families living in abject poverty now have access to clean water. 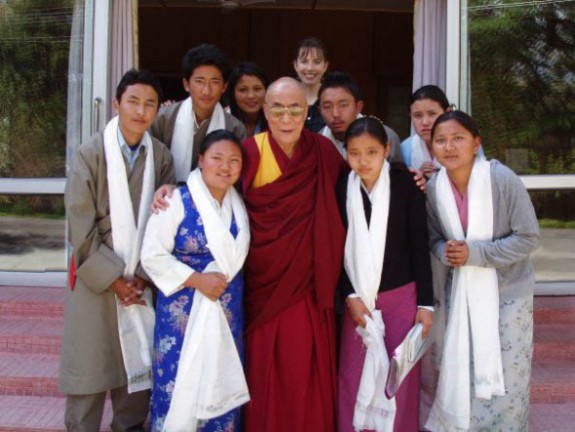 How to Change the World? Together

What Tenzin Loden and his team shows us is that we can begin to overcome our powerlessness by taking action, together.

There are many big problems in the world, and many of us wish to be part of the solution. Yet, many of us don't act. Why? Because as individuals, we feel powerless, and understandably so. Billions of people live in poverty, or under oppression, or without access to clean water or sanitation, and there is nothing I alone can do to change that. The planet is being ravaged, forests are being destroyed, polar ice is melting. But I'm just one guy, what can I do? I feel I'm totally powerless.

Alone, I am powerless. But even a small group of us, working together, can do something significant, such as cleaning a beach, building a bridge, providing a village access to clean water, or reforesting a bare hillside. A large group of us working together can solve for poverty, injustice and environmental destruction.

The end of powerlessness is community. Alone, I am powerless. Together, we change the world.

Tenzin Loden is far from being the lone example. There are millions of peace projects, big and small, already initiated under the One Billion Acts of Peace umbrella. For example, a few thousand miles away in East Timor, a country stricken by poverty, violence and environmental destruction, a young man called Vidal was inspired by the same campaign to do something for his war-torn country. Nobel Peace Prize winner José Ramos-Horta, then Prime Minister of East Timor (later President) encouraged Vidal and his friends to start a reforestation program. Such a program would create jobs, heal the environment, and provide income for the next generation. Vidal vowed to begin by gathering a group of young people to plant a thousand trees. But there was a challenge: where do you find a thousand saplings in a country with no nursery? Worse still, Vidal knew nothing about planting trees. What to do? Being ever resourceful, Vidal spotted a house where the owner appeared to be a great gardener. He knocked on the door and asked to learn about trees.

The owner, Fabio, turned out to be a professional landscaper trained in the United States. Fabio taught Vidal everything he needed to know about making and potting cuttings, and then on to planting and nurturing trees. Together, they gathered a group of two dozen young leaders to form a "Green Corps" and in three months, planted and nurtured almost one thousand trees on a hillside under challenging circumstances. Thanks to the determination of one young man and his two dozen friends, a thousand new trees now bloom. 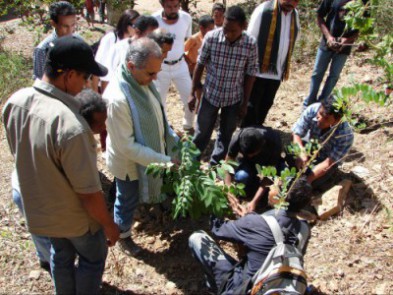 One Billion Acts of Peace started in September 2006. Ten Nobel Peace Prize winners, including the Dalai Lama and Archbishop Desmond Tutu, gathered in Denver, Colorado, to celebrate the 10th anniversary of the PeaceJam Foundation. PeaceJam was founded by fifteen-time Nobel Peace Prize nominees, Dawn Engle and Ivan Suvanjieff, to connect young people with Nobel Peace laureates, so that the laureates could inspire young people to use their energy for positive change in the world. It was the largest gathering of Nobel Peace laureates on US soil. The ten Nobel laureates, together with PeaceJam, launched a campaign to inspire one billion acts of peace worldwide with a goal of solving the biggest problems facing the world, including global poverty, injustice and environmental destruction. They called it the Global Call to Action, then later renamed the campaign to One Billion Acts of Peace. To date, the campaign has recorded more than seven million acts of peace committed by more than one million people, including Tenzin and Vidal. Seven of the Nobel Peace laureates nominated One Billion Acts of Peace for the Nobel Peace prize in 2015. 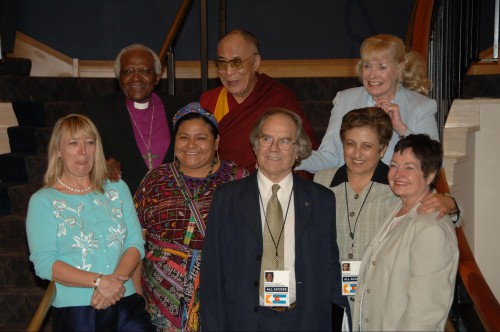 From Tourist to Traveler to Guide

Our core strategy is something we call "From Tourist to Traveler to Guide". Doing good for the world seems intimidating and daunting for many, so we encourage people to start small ("tourist"). Donate a book, offer a meal to one homeless person, or mentor a child for an hour. After that, participate in something bigger that already exists ("traveler"), to get some "sea legs". Join an effort to fight against child slavery, bring clean water to a community, or plant a thousand trees. Finally, we want to empower people to become effective agents of change by building and leading communities ("guide"), to create peace, build bridges, provide access to water, medicine and education, heal the earth, or do one of (literally) a billion things to change the world. We want to help people elevate upstream along the continuum of tourist -> traveler -> guide, and in doing so, we hope to inspire and facilitate the arising of millions of these "guides." 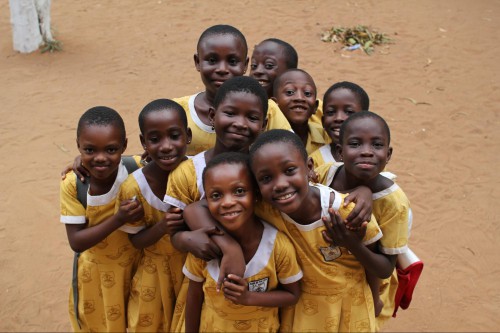 When we have millions of people leading positive change around the world, forming communities of action around themselves, we end powerlessness, and we change the world.

How do we do that? Three things: inspire, empower, facilitate. 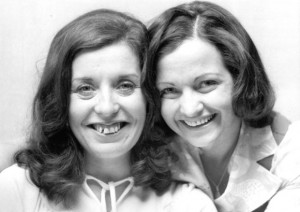 First, we want to help people inspire each other. It begins with the thirteen Nobel Peace laureates who are personally committed to leading One Billion Acts of Peace. They show up in person to talk to young leaders and officiate award ceremonies. They share their presence using technology as much as they can. They also inspire us with their life stories. All our Nobel laureates started as ordinary people inspired to do something. Mairead Maguire, for example, was determined to do something for peace in Northern Ireland after her sister's three children were killed. Nearby, Betty Williams assembled some 200 Protestant and Catholic women to march for peace in Belfast. Mairead joined the march and, together, Betty and Mairead became joint leaders of what became a major peace movement that brought together many thousands of Catholics and Protestants., This movement was instrumental in bringing eventual peace to Northern Ireland. Mairead and Betty were awarded the 1976 Nobel Peace Prize. They are inspiring heroines, but at the same time, they were also just ordinary people who took action. Such heroism is not found only in our Nobel laureates. Many others involved in One Billion Acts of Peace, including Tenzin, Vidal, and their teammates, are heroes and heroines, and at the same time, they are also just ordinary people actively doing something good for the world. We hope to inspire the innate heroism in every person, so that all will be inspired to act.

Inspiration is necessary, but insufficient. We also need to help people feel empowered. In reality, everyone already possesses the power to act, but they are not always aware of that. So the only thing we have to do is to help people realize they are already empowered, and then facilitate the expression of this empowerment. We do this with technology and fun.

We created a website and a mobile app (currently in pre-alpha) that allow people to log and share the acts of peace that they commit. We hope this helps people ease into the "tourist" stage and also inspire their friends to join in. We are exploring gamification by working to create campaigns that engage users through healthy competition, leaderboards, badges, gifts of gratitude, and trip giveaways when they create multiple acts of peace, share acts and stories on social media, and act as ambassadors for One Billion Acts of Peace.

We want to make doing good fun and popular. In the next stage, we plan to extend our website and app to focus on community: giving people the ability to discover, join, organize and lead communities of action. In doing so, we hope to empower and facilitate people in the "traveler" and "guide" stages, thereby helping them to become effective agents of change through community.

Finally, we hope to extend our technology further to empower and facilitate communities of communities. We aspire to create a platform that doesn't yet exist in the world: a platform to enable collaboration between nonprofits on a massive scale. That represents a sea change. Nonprofits do amazing work, but currently, many of them are exhausted and underfunded. They are not working closely with each other, but instead, are competing with each other for very limited resources. With the tools we plan to provide, we hope they'll all move from competition to global collaboration, and from exhaustion to optimism and empowerment. In that sense, we aspire to become the UN of the nonprofit world.

What We Need From You

The One Billion Acts of Peace campaign is at a cross-roads; we know what we need to do, but we need your help. The next step in our evolution is to create the Billion Acts technology that will connect ordinary citizens, changemakers, NGOs, social activists, corporations, philanthropic organizations, policy makers and innovators in every corner of the world with the hope that together we can solve the most pressing issues of our time. In other words, technology to inspire, empower and facilitate on a massive scale.

Your donation will help us build this technology. Please donate today here.

My friends, I'd like to invite you to join our thirteen Nobel Peace laureates, and the millions of us at One Billion Acts of Peace, to change the world. 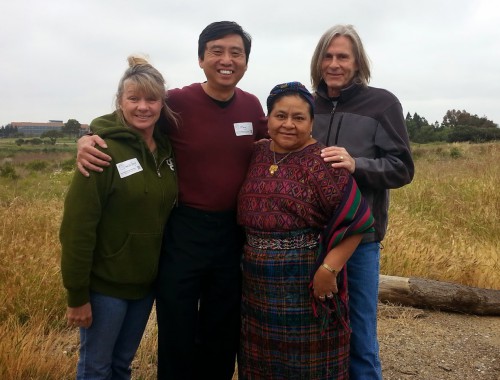