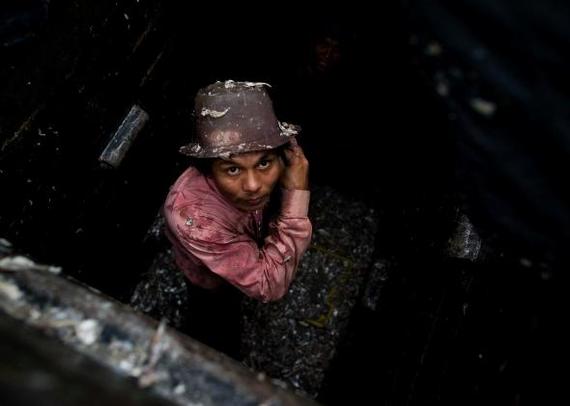 The global fishing industry, and the Thai fishing fleet in particular, is increasingly being called to account for abuses that represent not just virtual slavery, but the real thing.

The new attention to human rights is expanding the definition of "sustainable seafood" to include not only fish and the oceans they swim in, but the working conditions of the people who catch them. Indeed, exploitation of people is almost always accompanied by exploitation of nature.

Now, the same tools that help buyers choose fillets from environment-friendly sources are starting to be used to trace seafood to socially responsible suppliers as well. At the big Boston Seafood Expo this week, the Obama administration announced a traceability program to track seafood from its harvest through its import into the U.S., part of a broader plan to combat illegal, unreported and unregulated fishing. California's Transparency in Supply Chains Act requires businesses to disclose their efforts, if any, to eradicate human trafficking and slavery from their supply chains.

Some seafood businesses are working to get ahead of the issue. This month, Fair Trade USA, known originally for certified coffee, chocolate and bananas, is launching its first certified fair fish product, yellow fin tuna from the Moluccas in Indonesia. The Safeway and Albertson's supermarket chain is working with Fishwise to examine its entire seafood supply chain, starting with Thai shrimp.

"Our ultimate goal is being part of a supply chain that is free from human trafficking, child labor and all human rights abuses," Chris Ratto, the grocery chain's director of sustainability, said at the SeaWeb Summit earlier this year.

The Thai fishing industry is under the most intense scrutiny. Thailand exports $1.6 billion worth of seafood to the U.S. each year out of $7.9 billion in total exports. The 650,000-person fishing labor force is 90 percent non-Thai, mostly migrant workers from Burma, Laos, Cambodia and other poorer countries. The migrants typically do not speak Thai, lack documents and education, and fall prey to fraudulent recruitment and bonded indebtedness. A UN report found Thai fishing crew members on average are $700 in debt.

"I have never witnessed what we are seeing in Thailand," says Steve Trent, executive director of the Environmental Justice Foundation, which documented reports of beatings, killings, bonded servitude and kidnappings for months at sea. Last year, the EJF helped convince the U.S. State Department to downgrade Thailand to the lowest-possible ranking in in its annual Trafficking in Persons report.

A series of reports in the Guardian newspaper last year brought the issue into sharp focus. Other reports from the US State Department, Fishwise and Greenpeace have documented instances of human rights abuses in the fishing industry. A UN interagency report found that 59 percent of migrant fishermen interviewed had witnessed a murder on a boat.

The new focus on human rights and working conditions comes as seafood suppliers face consumer demand and regulatory pressure to trace, and certify, their sources. Illegal, unreported and unregulated, or IUU, fishing hurts legitimate businesses, compromises the sustainability of fish stocks and damages marine ecosystems. Global losses due to IUU fishing are estimated to be between $10 billion and $23.5 billion per year.

Slave labor in the seafood supply chain is in part driven by the over-exploitation of fish stocks. Trent says many Thai fishing vessels say they cannot be profitable without underpaid or unpaid labor. Less fish to catch equals less profit for fishing companies so more labor is needed to keep harvest up, leading to shrinking wages or outright coercion.

Traceable fish are more valuable fish. Labels, purchasing standards, barcodes and readers that make clear where fish comes from, who caught them, and who has bought and sold them, raise the value of the product and open new markets for suppliers. That opens investment opportunities to lower risk and increase profits.

"We see opportunities for traceability to help suppliers enter new markets and gain market share, and that improves margins" says Monica Jain, director of the Fish 2.0 business competition, which will award more than $180,000 in prizes to seafood businesses, including those with promising techniques to increase transparency and accountability.

"The whole chain need to create supply from the bottom up," Jain says. "You can't separate the environmental and the social."

Consumer pressure is spurring food retailers to assess the risks in their supply chain and find alternative sources. Fair Trade USA began developing standards guaranteeing fair and safe working conditions for fishers in 2010. Fair Trade products will sell in U.S. retail outlets for a premium and fishers will get a portion of that premium back for local community growth. The first certified fair fish, yellow fin tuna from the Moluccas in Indonesia, will be available at some U.S. Safeway stores this month.

Fair Trade's Maya Spaull said the certification will "help consumers understand there are choices out there that guarantee the welfare of people and the future of the species."

Note: ImpactAlpha is a media sponsor of Fish 2.0. The business competition will hold an informational session in Bangkok, Thailand on March 24.
Follow all of ImpactAlpha's "Financing Fish" coverage here or on Twitter #financingfish.