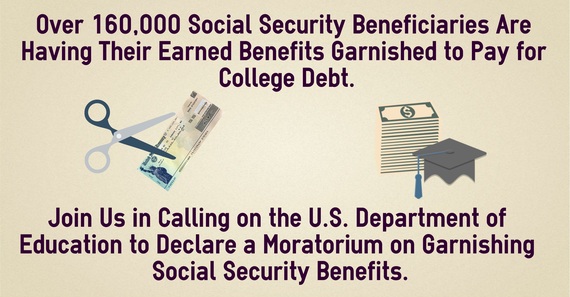 Only in the insular world of Washington can people seriously assert that old people and young people are adversaries, rather than natural and strong allies. Nowhere is this strong alliance clearer than with regard to Social Security and the student debt crisis.

Because parents generally try to assist their children who seek higher education, Social Security used to pay benefits to students enrolled in colleges, universities and vocational programs when working parents died, became disabled, or grew old. But those student benefits were repealed in 1981, notwithstanding that they disproportionately went to children in poorer households. That repeal required more borrowing for education.

And the amount of borrowing for education continues to go up, as the following chart shows: 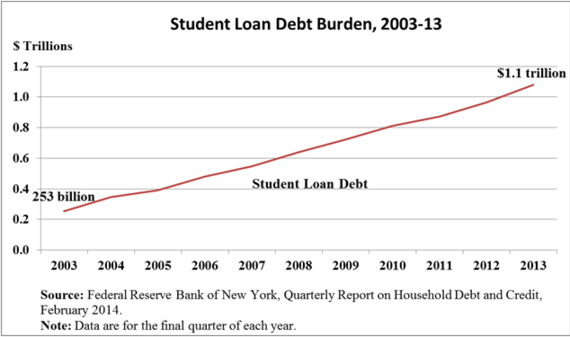 Much of that student debt of the old is a result of borrowing decades before for their own education. Student debt hangs around; it cannot easily be discharged in bankruptcy, despite great hardship. Other debt is owed on behalf of the student loans of children or grandchildren whom parents and grandparents sought to help by co-signing loans, and are now on the hook for repayment. About 90 percent of private student loans must be co-signed and the co-signers are frequently parents and grandparents.

Social Security's benefits are extremely modest by virtually any standard. They often provide people on fixed incomes with barely enough to survive. Those benefits, unlike most other assets, are beyond the reach of creditors -- unless the creditor is the United States. Garnishing Social Security benefits for student loan debt was beyond even the reach of the federal government prior to legislation enacted in 1996.

But that legislation removed this important protection. The number of retirees and people with disabilities who have a part of their modest Social Security checks taken to pay off student loans, often decades old, has tripled since the Great Recession. In 2013 alone, 156,000 Social Security beneficiaries had their benefits garnished to the tune of $150 million to pay off student loans. And that is the fate awaiting many young people if the law is not changed. Their unpaid student debt can literally follow them to the grave.

All of us are better off when workers have guaranteed income in the event that wages are lost. When grandparents have guaranteed, adequate incomes, they can support themselves, taking pressure off adult children. Prior to Social Security, old people generally moved in with their adult children or other relatives, if they had them. Older people considered themselves an inescapable burden to their children. If they had no one who could or would take them in, they generally had no choice but the poorhouse -- an all-too-real institution when all other options were gone.

And all of us are better off when young people can educate themselves without incurring mountains of debt. An educated workforce is a productive workforce. Freedom from debt provides the ability to freely explore one's dreams, which may include invention and entrepreneurship. Moreover, when those entering the workforce can get good paying jobs and are free of crushing student debt, they can contribute more affordably to Social Security. The existence of Social Security helps to allow young adults to take economic risks, knowing that they have life insurance, disability insurance, and retirement income through Social Security.

But currently, the wealthiest among us escape paying their fair share into Social Security, and the massive student debt crisis is threatening our society at large. Once a land of upward mobility, now people tend to remain in the same economic conditions in which they were born. Where once we prided ourselves as the land of unlimited opportunity, today we have less upward mobility than much of Europe.

Our nation was founded on the principle of equal opportunity. None other than Founding Father Thomas Paine advocated that everyone, when they became old or disabled, be provided guaranteed income and that everyone, when they reached the age of 21, be provided a lump sum to start adulthood. He advocated that these benefits be paid through an estate tax collected from the wealthiest among us.

Social Security's modest benefits can and should be protected and expanded at the same time that student debt is wiped clean and public colleges and universities are made tuition-free. If we don't want a future nation of impoverished seniors -- senior citizens and seniors in college -- we must enact legislation that: (1) Expands Social Security benefits, including restoring the student benefit, (2) forgives student loans, (3) makes public colleges and universities tuition free, just as high school is, and (4) repeals the 1996 law subjecting Social Security benefits to garnishment for federal student loans.

If the policy to protect Social Security benefits makes sense with respect to private creditors -- and it does -- it is equally wise policy when the creditor is the United States.

The monied interests are seeking to focus attention away from themselves by turning the young and the old against each other, rather than united against those with the wealth. President Franklin Roosevelt understood the tactic well. In pulling the curtain back at the effort to turn workers against Social Security, he famously explained, "It is an old strategy of tyrants to delude their victims into fighting their battles for them."

If we don't fall victim to this old strategy of the tyrannical monied interests, we will win. In his Los Angeles address to an overflow crowd of 28,000 people, Senator Bernie Sanders reminded all of us:

Sanders could have easily added, when we do not allow them to divide us up by age, there is nothing we cannot accomplish.