Last Friday, governments at the UN adopted an outcome document at the conclusion of the 2 weeks session of the UN Commission on the Status of Women (CSW 57). Following last year's collapse of the meeting and the huge pressure from conservative forces who tried to derail the process, the adoption of an outcome text condemning violence against women in strong terms is celebrated as a success.

But is it? My colleague Daniela Rosche who led Oxfam team at the CSW-57 shares her views:

The concerted attempt at rolling back women's rights, by bringing national level strife on the position of women and abortion, religion, culture and custom into the global arena, is not a new development.

The pressure on the CSW meetings and its role in upholding basic rights for women has gradually increased each year since 2009. And this trend has long spilled over to other UN forums such as the Human Rights Council, Rio+20 and the development of new sustainable development goals or the Arms Trade Treaty (ATT) negotiations. But finally, this year many leading governments and civil society came together to make a concerted push back at the attempts to discredit the CSW.

At the same time, an even greater challenge to the elimination of violence against women than these reactive forces taking the CSW hostage is the huge gap between text and implementation - between rhetoric and concrete action on the ground.

I would argue this is the gender equality challenge of the 21st century. At CSW many women's rights activist made the case that violence is increasing- a fact supported by daily news reports of maiming, raping, shooting, killing women and an Oxfam country level survey from 2010. In a 2005 multi-country study by the World Health Organization (WHO) up to 70% of women between 15 and 49 years of age said they had experienced some form of violence throughout their life. 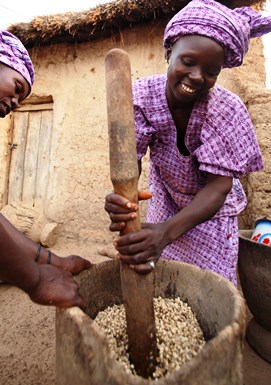 Of the 3,5 billion women worldwide, up to 2,5 billion will have experienced violence at some point in their life (Credit: Oxfam)

These are known facts about the elimination of violence against women. Yet at this CSW meeting, governments again did nothing about the lack of implementation. So while its good news we have a text coming out of CSW, a fact hailed as "historic", we must not fool ourselves thinking that an adopted text is going to make gender equality happen on the ground. It doesn't serve women to discredit the achievements of the international community at CSW. Nevertheless, we must do more to eliminate violence. We really must.

The power plays at the UN has left no time for governments and all of us to answer this question: HOW can we ensure all the positive rules and policies aimed at eliminating VAW are being put into practice at country level? By when will governments, for example, repeal laws that discriminate against women? By when will each country allocate resources in their national budget or poverty reduction strategy to eliminate VAW? How fast and by when will governments set up hotlines for victims and survivors of VAW or end user fees for health services? When will teachers in class have before them text books through which they can teach children about human rights and issues around sexuality?

Oxfam wants a plan that details concrete steps towards making any of these policy recommendations coming out of CSW 57 reality. We need a plan to see where we are going, what our priorities are from the 50+ actions that governments have promised at CSW. Oxfam has therefore been calling on governments to use CSW 57 as an opportunity to commit to the development of an international action plan which sets concrete targets, timetables and other measures to fast track implementation of existing norms to end violence and provide an accountability tool.

I am a big fan of laws and policies and I am glad the good guys could not be defeated at CSW. But when it comes to ending violence against women, I get very impatient that we are asked to be satisfied with another UN outcome text. As civil society and international community it is our job to want more, and to recognize that we need more than text to realize women's rights and end VAW.

We all say, violence is the biggest human rights atrocity of the 21st century. If this is so, then we need to do all we can to make sure we put an end to it... not only on paper.

Find out more about Oxfam's work on Gender Issues