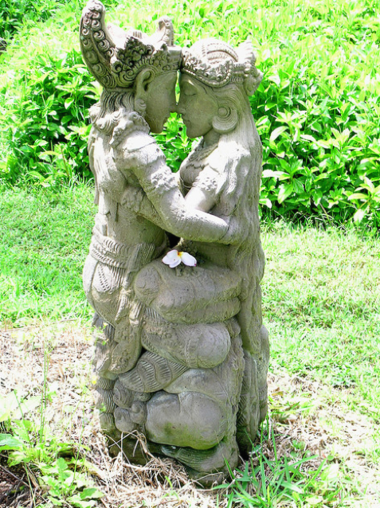 Sick of Hate Politics? We are too.

Call our current epoch The Political Night of the Living Dead. Zombie Politics.

There is a way to transform it. That way is rooted in a metaphorical Polynesian-style kiss.

Call it a conspiracy. You are invited to join.

The word "conspire" comes from the Latin con -- "together with" -- and spirarare -- to breathe. "Conspire," at its root, means "to breathe together." The needed conspiracy is a "conspiracy to conspire."

The Polynesian people -- such as the Hawai'ians -- had (some still have) a custom of greeting by "honi." Honi means "touching nose-to-nose and inhaling or essentially sharing each other's breaths."

This is akin to the better known "Eskimo kiss" of the Inuit, rubbing noses. This is high civilization. It points the way out of our Political Night of the Living Dead.

Westerners settling in Hawai'i greeted people with the handshakes customary to European culture. The Polynesians considered this strange custom, well, strange. They called the Westerners "haoli."

Haoli means breathless. "The implication is not only that foreigners are aloof and ignorant of local ways, but also have 'no spirit or life within....'"

Breathless. Like... Zombies. Today we confront a kind of Zombified, breathless, politics. We can change that.

Many of us passionately hold to progressive or conservative doctrine. Our respective leaders have been locking antlers like two bucks for a very long time.

Yet it has drawbacks.

The breathless spectacle of Zombified politics -- the handshake, or, as is much more prevalent at the moment, the punch-in-the-nose -- has fundamental deficiencies. We diminish ourselves if we do not make the space to appreciate the grains of truth held by those with whom we disagree.

We lose something ineffably precious. We lose our "spirit or life within."

It is to something very like this loss that T.S. Eliot may have been alluding in The Hollow Men.

At the hour when we are

Lips that would kiss

The broken stone, of course, sounds like the dogma to which we all are prey.

Joan Blades is co-creating perhaps her most subversive group yet: LivingRoomConversations.org. Its process resembles, metaphorically, the Polynesian custom of "touching nose-to-nose and inhaling or essentially sharing each other's breaths."

Why call this "subversive?" "Subvert" derives from sub -- "below" -- and vertere -- "to turn." Subversion is not inherently sinister. It has dignity. Subversive, from its root, means working from the base to steer the system.

Steering from the base was exactly what MoveOn, under the leadership of its founders Joan Blades and Wes Boyd, did in helping defend Bill Clinton from impeachment and in opposing the invasion of Iraq. It mobilized millions of progressives to steer our elected officials.

This proved, patiently, potent. Transformational, even.

Joan Blade's new vision, shared by the tiny team of activists animating LivingRoomConversations.org, is of "a world in which people who have fundamental differences of opinion and backgrounds work together with respect - and even joy - to realize the vibrant future we all desire."

Living Room Conversational Conspirators only metaphorically, not literally, rub noses. We share each other's insights with respect. The process is different from the domineering conspiracies now dominating.

It's different from everything else out there. It's not argumentative. It offers richer, more nuanced, outcomes without asking either progressives or conservatives to abandon even an iota of principle.

For this New Conspiracy to succeed it needs only people like you to support the Living over the Living Dead. It honors the great, proto-existentialist, Nietzsche's trenchant commandment: "Whoever fights monsters should see to it that in the process he does not become a monster."

There is a way to bring the Political Night of the Living Dead to an end. Simply breathe together.

Come. Join this New Conspiracy, the Conspiracy to Conspire.