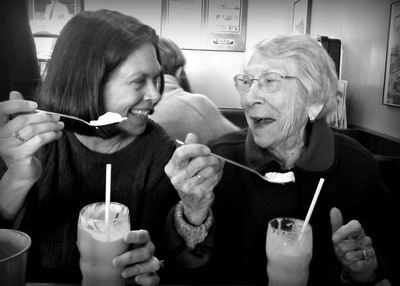 My mother seemed unusually sad on the March morning that Jeff and I left her apartment to drive to New England. The depth of her emotion struck me as odd. We'd visited with her for several days on our way north, and we planned to stop there again on our trip home. "Mom," I said, "we'll be back in two weeks, for at least a couple of nights."

Could she really have forgotten? She was doing so well -- living without pain, eating well, even playing an occasional hand of bridge with other women in her retirement complex. Still, I drove away feeling unsettled.

Before our two weeks were up, my mother went into acute respiratory distress. We raced back to be with her, arriving only a few hours before she died.

"So begins my life as fully adult, no longer in any way a child.
"


Although she had assured us she felt fine, Mom somehow knew what was coming. Here's what we found when we went into her apartment after her passing: a desk that had been covered with chaotic piles of bank statements and legal papers, now all sorted out, with everything in carefully marked files. On a table in the room where Jeff and I slept, she'd placed a copy of a document assigning legal power of attorney to my older brother. It had not been there when we left.

I thought back to the nesting impulse I'd had before giving birth to Reid, the irresistible urge to put things in order. My mother, it seemed, had felt the same strong inclination in her final days.

This new grief came to me only a few days after marking the seventh anniversary of Reid's death. For the first time on that date, Jeff and I had felt whole enough to celebrate our son's life. We had hiked up a mountain and enjoyed a splendid dinner in a village on the Maine coast. It seemed my life was finally returning to a semblance of normalcy.

Now I greet again the hallmarks of grief: the sensation of being cut loose; the abrupt swings between absolute certainty that I'm handling this, that I'm sad but still sane -- and the sudden longing to spend all day in bed, hiding under the covers. A few days ago, as I listened to a friend chat about the details of a trip she's planning out West, I had the strong feeling that I was standing in a cavern. Oh, right, I thought. Up there on the Earth's surface, things are proceeding as usual. It's only down here that life feels so dim and disjointed.

But this cavern isn't nearly as deep as the one I fell into when we lost Reid, who was only 16. My mother lived 91 years, 33 of them with a chronic heart condition. We counted ourselves fortunate every day that she continued to get out of bed. Nor can I help remembering the recent assurance I offered two friends who lost dear ones over the winter: "Life will get easier. I promise."

My parents and I did not always see eye-to-eye, especially during my teens and twenties. But through the decades we accomplished something that's essential to loving fully: We accepted each other. In doing so, we stopped trying to change each other.

Acceptance became the foundation for our love. Despite our disagreements about politics, my father and I came to respect each other's view of the world. No matter how crazy it made me when my mother treated me like a young girl, I learned to treasure those moments, knowing she was only trying to protect me. My parents graciously overlooked my annoying behaviors too. In this way we enriched each other's lives.

Mom and Dad showed me how to gracefully accept misfortune, without a shred of bitterness. My father lived most of his adult life with acute rheumatoid arthritis. He controlled it with daily vigorous exercise. Even after a heart attack that would have killed most people, my mother refused to become what she called a "cardiac cripple." Instead she walked three miles a day, briskly. By watching how they coped with disappointment and heartache, I realized that as wrenching as it was to lose my only child, it did not need to ruin my life.

I am the same woman I was when we lost Reid, and later my father, and a dear friend, and finally my mother. But I hold now a capacity for understanding and compassion that I lacked in my earlier life, the time before grief. I envision my heart as an old, gnarled tree. Yet as sad and scarred as I feel now, I know my sorrow over my mother's passage will lessen, and that in time I will emerge, still solidly, amazingly whole.

Jan DeBlieu writes and blogs about selfless service and how it can help heal grief.