The following are the remarks prepared by Jhumka Gupta, ScD, for the third annual Worldwide EndoMarch in Washington, D.C., that took place on March 19, 2016 (World Endometriosis Day). Dr. Gupta delivered the keynote address for this event.

First of all, I'd like to thank all the women, girls, and the people who care about them for coming to this event. I'd like to thank the organizers for putting this on, for the very gracious introduction, and for inviting me to speak. I feel honored to be here today with all of you.

I was given the task of talking about my work on violence against women and public health, and relating it to endometriosis. To do this, I'll start by sharing a story from when I was in college. I was volunteering with children living with HIV, right here in Washington DC. I thought that if we could just give women information on how HIV was spread, and simply give them condoms, then the disease would go away. But I soon realized how wrong and naïve I was -- and this really influenced how I began my public health career in violence against women. I learned from talking to some of the women that they knew about condoms, but they were scared of violence from their partners, and so they couldn't demand to protect themselves. One woman said that when she tried to get help, her friends and family would blame her for "starting trouble". I've since met so many other women facing violence. Whether it was in West Africa, survivors of sex trafficking in India, or those impacted by sexual assault right here on our college campuses, the health of women and girls was being threatened, not just because of diseases or viruses that could be seen under the microscope or an MRI, but also by social pathologies that lead 1 in 3 women to experience violence worldwide, and the US is no exception. What do I mean by social pathologies? I am talking about gender inequality, social injustice, and attitudes of society that keep women and girls from fully reaching their potential.

So, yes, the scarring and damage to organs happen because of the physical pathology of endometriosis, but it is the social pathology that creates the silent epidemic of endometriosis. It's the similar dismissal of women's concerns that I see in my work on violence against women. But, as one of my favorite writers, Arundhati Roy, so correctly states, "There's really no such thing as the 'voiceless'. There are only the deliberately silenced, or the preferably unheard."

So the question is, how can endometriosis go from the "preferably unheard" to a priority in the public health world? Today marks a remarkable event to begin this shift. We can be inspired by other social justice and health movements. The HIV/AIDS activism from the 1980's challenged the public health field to live up to its mission, "fulfilling society's interest in assuring the conditions in which people can be healthy". Medical care alone wasn't going to cut it. Passing out information or health education materials alone wasn't going to cut it---and these strategies alone almost never do---they needed to challenge power. Organizations such as ACT-UP (which stands for the AIDS Coalition to Unleash Power) challenged elected officials, the FDA, and the NIH by demanding access to drugs and better use of HIV/AIDS research funding. They changed the way things were done so that those who were 'preferably unheard' (gay communities, women, and people of color) would benefit. They organized themselves well, they staged demonstrations--in media offices, at medical meetings. ACT-UP also formed alliances with leaders in the HIV field--researchers, physicians, government officials, other advocates. But what was important was that these alliances didn't stop them from holding everyone accountable ---because the health and human rights of the 'preferably unheard' came first. And thanks to their efforts, life-saving drugs became more affordable--and better care for women with HIV was made possible.

Imagine what we could accomplish if we could join together and hold media accountable for accurate facts on endometriosis--if we could expect that when people fight for reproductive rights, they are also fighting for endometriosis alongside sex education and access to contraceptives, and if we could demand more research funding towards treatments. I am fortunate enough to call a well-known activist who worked with ACT-UP, whose name is Gregg Gonsalves, a colleague, and I told him all about our march. I asked him, what advice would he share for a disease that has barely made a dent in the psyche of the public health world. He said to "act up, fight back, fight endometriosis. A little anger and rage directed properly (and non-violently) goes a long way towards social change."

So, as we fight the social pathologies of endometriosis, we can also learn from the challenges faced by other health and social justice movements, by proactively addressing--very early on-- our blind spots. In my work on violence against women, immigrant women were vulnerable if their abusive partners destroyed their immigration documents, but nobody was initially talking about this or other issues unique to women of color. Another blind spot was teen dating violence, because we used to only think of domestic violence as happening to adult women who who were married. I am encouraged by looking around this room that we are already on our way to reducing these blind spots for endometriosis. We need to make sure that our advocacy platforms also benefit transgender patients and lesbian women. We need to fight so that quality excision surgery is accessible to all women regardless of their income, and regardless of their zip code. We need to continue to speak up for women with all forms of suffering--whether it's relieved with one or two quality excision surgeries or whether endometriosis persists even after multiple attempts. But let me be clear, none of these things are or should be divisive---instead these are the very things that will make this movement stronger.

We definitely have our work cut out for us---but being here, in solidarity, is such an important step. Those of you have the disease, I want to acknowledge it's certainly not easy to travel and plan when you're juggling your own health and other life priorities. You've already taken an important step in showing everyone that the woman or girl who suffers from endometriosis should not be the one feeling shame. The shame should rest on those who systematically disregard her voice.

So as I wrap up, I want to focus not on the women and girls with endo---because you're already fighters--but on those of you, friends, partners, and family, and the professionals who came to support them. Your presence is so important. But what we need from you extends well beyond today. Again, I draw on my experience with fighting violence against women. We are big believers of the "bystander approach", where we call on our communities to take ownership of violence against women and speak up and interrupt potentially dangerous situations and sexist language. We need you to take ownership of the problem of endometriosis and be an interrupter of its social pathologies. We need you to be an interrupter and speak up when you overhear others say that women over-exaggerate their pain. We need you to speak up when you learn of a teenage girl missing school due to her periods. We need you to speak up when you hear people say that endometriosis is not a real disease. We need you to be an interrupter and remind people that suffering can be visible and invisible, so that they too are aware of their blind spots.

Thank you and I look forward to marching with you.

More information on the Worldwide EndoMarch can be found at: https://endomarch.wordpress.com/dc-endomarch/ and at http://www.endomarch.org/. 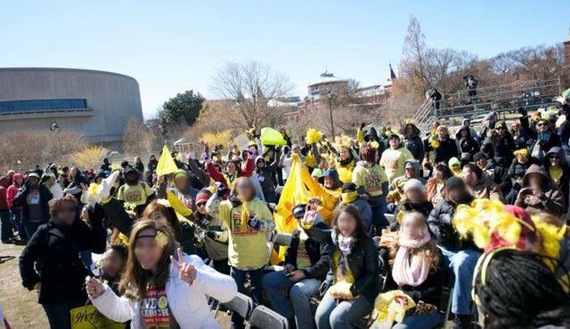