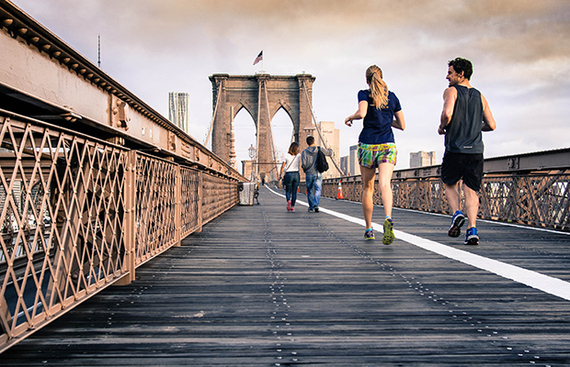 By Kristen Domonell for Life by Daily Burn

If you've ever taken out a bad day at the office on the nearest treadmill, you know that working up a good sweat can easily turn your day around. And by now you've probably heard that endorphins are the magic bullet behind that post-workout bliss. People love the feeling so much that "endorphin junkie" has even become synonymous with someone who's constantly chasing that exercise high. But while endorphins may get all the credit for your post-run buzz, there's actually a lot more going on behind the scenes. Here's what you need to know about endorphins -- and why you might not be an endorphin junkie after all.

When your body comes under stress or experiences pain (hello, burpees), neurochemicals called endorphins are produced in the brain's hypothalamus and pituitary gland, explains J. Kip Matthews, Ph.D, a sport and exercise psychologist. Endorphins, which are structurally similar to the drug morphine, are considered natural painkillers because they activate opioid receptors in the brain that help minimize discomfort, says Matthews. They can also help bring about feelings of euphoria and general well-being. "Endorphins are also involved in natural reward circuits related to activities such as feeding, drinking, sexual activity and maternal behavior," he says.

The idea that exercise creates a huge endorphin rush entered popular culture soon after endorphins were discovered 40 years ago, says Matthews. "Long-distance running was quite popular in the mid-1970s around the same time that endorphins were discovered. Anecdotally, there were a lot of reports of the so-called 'runner's high,'" he says. "By suppressing the experience of pain, a number of researchers put forth the idea that endorphins could be the source of this euphoric feeling after intense exercise." But was that really the case?

So what gives? The problem with jumping to the conclusion that endorphins cause your "exercise high" is that in large-scale studies, scientists measure endorphins present in the blood -- not the brain. Then, they make the assumption that if endorphin levels rise in the blood, then it must be because of an increase of endorphins in the brain, says Matthews. But their findings don't necessarily prove that. And it's the endorphins in your brain that would be causing that "high."

In fact, a recent German study found that, while endorphin levels are higher after a run, endorphins can't pass through the blood-brain barrier, which means they probably don't have much to do with experiencing an exercise high. What does affect the brain, researchers found, was a neurotransmitter called anandamide, which is elevated after exercise and can travel from the blood to the brain.

"While there have been some studies to show that exercise can lead to elevated endorphin levels in blood plasma, there have been no consistent findings that, indeed, exercise leads to that famous 'endorphin rush,'" Matthews says.

So if you aren't an endorphin junkie, then what are you? Well, you might be a serotonin or norepinephrine junkie, according to Matthews. When you exercise, your brain increases production of these neurotransmitters, which send messages throughout your nervous system. In the case of exercise, those messages might be something along the lines of: "You're running! This is awesome! Cheer up!"

Studies have linked low levels of serotonin and norepinephrine to depression, which is a much more solid link to feelings of post-workout euphoria than the evidence for endorphins, says Matthews. And it's not just that exercise leads to an increase in serotonin and norepinephrine which may, in turn, reduce depression and stress. Exercise may actually help ward off depression and anxiety by enhancing the body's ability to respond to stressors, he says.

"What appears to be happening is that exercise affords the body an opportunity to practice responding to stress, streamlining the communication between the systems involved in the stress response," says Matthews. "The less active we become, the more challenged we are in dealing with stress."

While the science about why you feel a rush after exercise may be complicated, that doesn't mean the runner's high isn't a very real feeling. And don't worry, we won't judge you if you still wear your "endorphin junkie" T-shirt to the gym.

Voting Made Easy
Register to vote and apply for an absentee ballot today
Register now
More:
healthy livingFitness and Exerciseexercise
Newsletter Sign Up
The essential guide to taking care of your mind and body
Subscribe to HuffPost’s wellness email
Successfully Subscribed!
Wellness delivered to your inbox