(The original article "Running to the ends of the earth" to which this one is now a diminished sequel can be found here.)

This April when I touched down in Santiago de Cuba, and had the Cuban airport security check my luggage (using a drug sniffing dog), one day before I would proceed to spend the next twenty five running across Castro's Cuba, I was mildly curious as to whether any major American news source would care. Even though in conjunction with "Anthropologie Consulting" we had planned this run way before President Obama made his now famous speech and exchanged prisoners it still seemed like many individuals would probably link the two together. Personally I didn't much mind as I was against the embargo and the timing suited us just fine since I felt the Cuban military, and government would avoid hassling an American mulling about their country on back sections of the "Carretera Central de Cuba" so soon after the warming of relations (even in the Western military zone towards the end I was only briefly detained by two Cuban soldiers and politely at that).

As I ran on the Cuban side moving towards our now infamous base at Guantanamo bay and was stopped by the Cuban border guards and ordered to skip 13 kilometers (I ran 14 kms around Havana to our new/old/new embassy to make up for the missed distance), I thought it was the sort of adventurous anecdote our American news outlets would be interested in covering. Later as I held the American flag at the Roncali lighthouse beside the Cuban one with my friends, and support crew Jose Pineda, and Alex Fernandez Corona 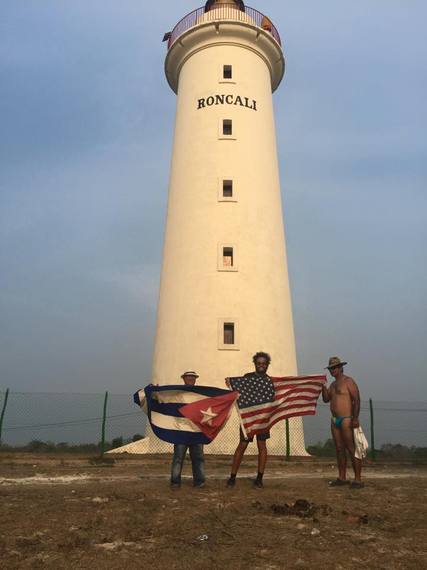 the curiosity kept building in regard to whether this was at least worth of a twenty-second sound bite on CNN, or at the very least Fox, or NBC. After all they covered much worse crap throughout their illustrious history so why not?

Certainly from an objective standpoint it seemed a positive, uplifting, and interesting story, that while important to me and to quite a number of ordinary Cubans who fist bumped and said seeing our two flags in my pictures at the endpoint was as important an image to them as it was to me, 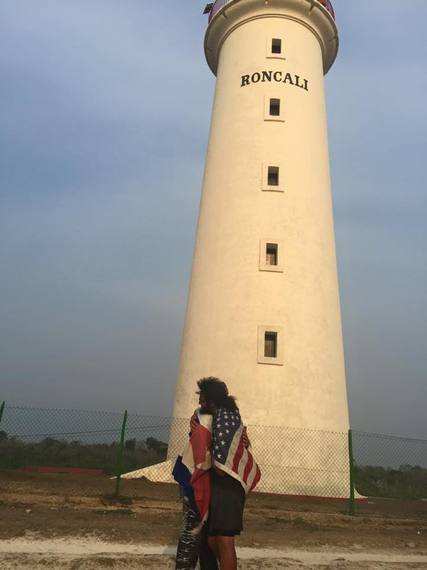 I thought for sure it may also be of interest to my fellow Americans.

Of course at the end of the day and more so to the point since my story does not include any new facts about a missing plane, sex scandal, or worst of all a gruesome body count shooting perpetrated by a gunman seeking national media attention there was not much interest from the press.

Isn't there something wrong with a picture where the media delves into the juicy details of how many magazines the generally dead shooter had in his trunk before offering an almost cynical expression of shocked sadness on the face of the news caster as opposed to covering something, absolutely anything else?

In fact to emphasize this point I want to veer off of my own meager successes and use my friend Tony Mangan as an example to cast a giant shadow over anything I did since he accomplished a 50,000 km run around the world over the course of four years from 2010-2014. Now while Tony received an equivalent of about four seconds of media attention in our country I'd still like to ask the almost rhetorical question of how come any random loon who perpetrates a four minute shooting gets the equivalent of four months star treatment from the press even if that shooting occurs in say France, or Norway not to even mention the USA?

I wonder if anyone from the major media outlets looks in the mirror and has a moral breakdown regarding how complicit they are in perpetuating the next act of violence that will garner national media attention.

Just look at the fellow who killed the reporters on live tv. His ranting manifesto quoted his approval for the violence caused by other such shooters and so of course it influenced him to follow suit given how much attention those acts of violence garnered.

All I ask is what value do these stories have to the wider public as a whole? And if we all agree they don't just like stories about runners running, why not do more, and more in depth stories on that cop who got the cat out of a tree, or those kids who held a bake sale to buy an expensive operation for a child from a poorer country?

It is not at all difficult to make positive news more relevant and influential in our society if we all agree that is the sort of society we want to live in, and there is no need thereby to relegate these stories to local, or regional news channels while focusing on localized tragic, and horrific news.
In fact if there is one take away from these tragedies it is the one parents, and relatives of victims are trying to promote en masse and that is that they want "NO notoriety for the killers."

I am not looking to blame anyone for the way things are except to say that when the next troubled individual asks himself what the best way of drawing prolonged attention to his cause is, will he look to the positive news stories that are perpetually absent from news sources, and from my own personal experience perpetually much harder to achieve, or will he look to follow in the footsteps of any random nut who gets his voice heard so long as he commits random acts of violence in public places?

To be honest it pisses me off to no end because of how many individuals have told me my stories have a positive, and inspirational influence in their lives, and I know that there are plenty of stories and individuals out there whose own do the same for me and that is ultimately what we should strive to promote and sensationalize on our evening news, or the morning paper.

I'd like to thank my local newspaper the "Twin Boro" News for publishing the one lone article stateside about my "run across Cuba," as well as Nicholas Pugliese from the "Bergen Record" another New Jersey paper for doing a write up on my last "Run Across Ireland:" 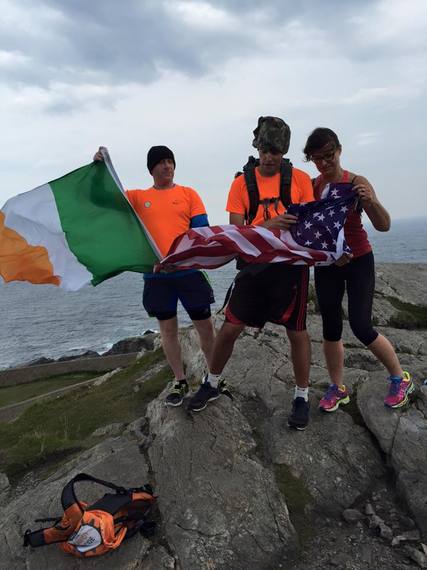