As the world launches stimulus plans and energy initiatives, there's a new way to save, as it turns out, lots of oil: cut back on bottled water.

In the first peer-reviewed study of its kind, researchers at the Pacific Institute found that in 2007 alone bottled water in the U.S. used "the equivalent of between 32 and 54 million barrels of oil--roughly one-third of a percent of total U.S. primary energy consumption." 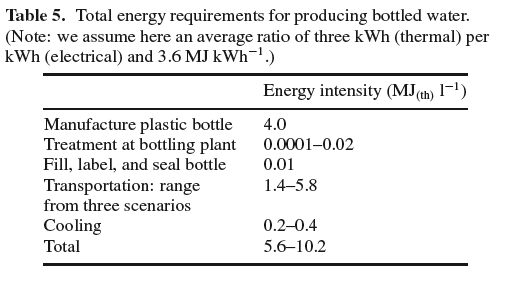 We've heard the arguments against bottled water -- it's expensive, uses a lot of plastic, and may not be tested as vigorously as tap water. I asked Gleick what's new:

"There's been a growing awareness of the environmental costs of bottled water. Before this, no one has ever looked comprehensively at the energy implications from bottling to transportation to use. And when we do, those energy implications turn out to be stunningly high.

"The energy costs are dominated by the energy in the plastic. Unless you're moving the bottle a long distance, then transportation is as bad as the plastic.

"In the growing debate about environmental impacts of agriculture there's a growing movement to eat locally. This study suggests that maybe we ought to be drinking locally."