Following months of behind-the-scenes maneuvering, it appears the Senate will begin debate soon on critically important legislation which could help American consumers, businesses and the federal government to save hundreds of millions of dollars each year by using less energy. And using less energy gives us a big leg up in the fight against climate change.

Simply put, passage of this bi-partisan legislation would be a "win-win" for everyone.
Improved energy efficiency should be a national priority -- not a political football. Today, there's a never-ending list of low-cost, off-the-shelf technologies which can improve energy efficiency and pay for themselves over a short period time. 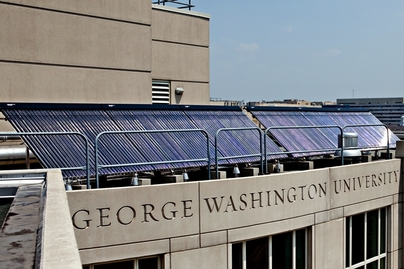 The Energy Savings and Industrial Competitiveness Act, also known as Shaheen-Portman, will help to reduce our nation's energy bill, improve our economic competitiveness, create new American jobs and enhance U.S. energy security. It has been endorsed by a coalition of more than 200 businesses, trade associations and advocacy groups, including the Solar Energy Industries Association (SEIA).
Sens. Jeanne Shaheen (D-N.H.) and Rob Portman (R-Ohio) deserve tremendous credit for moving this common-sense legislation forward and for keeping the issue of energy efficiency on the front burner in Congress.

As the second largest consumer of energy in the world -- second only to China -- it's critically important for the United States to improve energy efficiency. Take the use of computers, for example. By some estimates, a typical computer uses between 65 to 250 watts, while a monitor burns another 35 to 80 watts. Multiply that by 310 million computers spread across the United States, and you're looking at a tremendous amount of electricity used every single day -- just to power our computers!

Among other things, Shaheen-Portman requires the federal government, as the largest energy user in the United States, to come up with new energy-saving features for its computers. This will not only save energy - but also taxpayers' money.

According to the Energy Information Administration, residential and commercial buildings currently account for nearly 3/4 of all electricity usage in the United States. Reducing the amount of wasted energy will help our economy as well as the environment.

Sen. Shaheen said it best: "The cheapest energy is the energy we don't use."

America's solar energy industry is also doing its part to help. Today, more than 30 utility-scale, clean energy projects are under construction, putting thousands of electricians, steelworkers and laborers to work and helping to reduce carbon emissions. These facilities, along with rooftop solar on homes, businesses and schools, will help to generate clean, abundant energy for generations to come.

As an industry, we are very concerned about climate change. It's a real and growing threat to America and the rest of the world.

Shaheen-Portman is a smart, common-sense approach to fighting climate change, by reducing the amount of energy we use and waste.

From improved building efficiency, to increased R & D, to government cost-saving programs, Shaheen-Portman is a balanced, pragmatic approach to getting the biggest bang for our buck when it comes to energy. Will it pass this year? Hopefully. Should it pass this year? Absolutely. This is one opportunity that we simply can't afford to waste.