A woman sits with her boyfriend at a restaurant. The lights have dimmed, and a waiter brings over two glasses of bubbling champagne. All of a sudden the woman gasps -- there's a diamond ring in that glass! The man kneels down, they both shed tears and as he slips the ring on her finger, they are officially engaged.

It's a familiar scene to anyone who has watched a romantic comedy, or seen a horribly cheesy Kay Jewelers or Zales commercial -- despite the fact that you may never have seen this occur in real life. Rings, usually of the diamond variety, have come to be synonymous with love, commitment and marriage. After all, even Beyonce thinks that "if you like it, then you should have put a ring on it."

Shannon Rupp, writer for Canadian site The Tyee, is over the tradition of engagement rings. "The engagement ring is not, as diamond advertisers of the last 80 years or so have insisted, a symbol of love," she writes. "It’s a sort of down payment on a virgin vagina." She points out that historically these rings were used to signify what was essentially acknowledged to be a "business contract," and that the proliferation of diamond rings was, in fact, the result of a marketing ploy to create a mass demand for the "cheap and plentiful" stone. She goes so far as to call the practice "barbaric."

"In short: given equality laws and effective birth control, what in the world is going through people’s minds when a man decides to give a woman an engagement ring?" she asks.

We asked some of our editors to weigh in about the tradition of engagement rings. Are they simply pieces of beautiful jewelry that signify a mutual commitment, or are they a historically problematic -- and now ultra-commercialized -- tradition that we should say goodbye to forever?

My feelings are mixed on the idea of engagement rings, since I am a fairly recent recipient of one. Would I have cared if I got something other than a diamond? Not really. Would it have mattered if I had never received an engagement ring at all? I don't think so -- I would still be engaged and planning my wedding to the love of my life, with or without a ring. I truly believe, in this day and age, women who are getting married are starting to really take a hard look at the wedding industry for what it is -- an industry designed to sell you things that you actually don't need to get married. And I truly believe that we're capable enough to think about whether we want an engagement ring or not. Some women might see an engagement ring as an antiquated, made-up marketing ploy -- and that's perfectly fine. They can choose to move forward in their engagements sans ring or with a different stone or with both partners wearing a ring, or whatever.

But for some couples, an engagement ring is more than just a sparkly rock to hand over in exchange for a promise of marriage. For some, it's gifting your great grandmother's ring to the woman who will become your wife and passing that family legacy on. For me, it was my fiance taking a ring that was passed on to him from his grandfather, and creating a one-of-a-kind ring out of a family heirloom -- and I don't think he would have just handed over his grandfather's ring that means so much to him because he thinks of me as "chattel."

In an era when most people marry as fully formed adults, and when their reasons for joining in matrimony have little or nothing to do with economics, I would agree with the author that the engagement ring could easily be retired. However, I wouldn’t call them “barbaric” -- at least no more so than other hopelessly retro wedding traditions. Historically the bride walked down the aisle with her father because it represented her transfer from one man to another. The bride started tossing her bouquet to her single female guests because the catcher was supposed to be the next in line to be married. The origins of these traditions are absurd and, yes, sexist. But they endure because most people aren’t reading into them the way the author is -- they’re just doing it because it’s what generations of couples have done before them. That doesn’t make them barbarians. At worst, maybe they’re uninformed. But as with any decision about love and marriage, it’s up to the couple to decide which traditions to embrace, which to toss out, and which to upend and make their own.

To me, engagement rings are simply one example of many that highlight the complete commercialization of weddings. Most of what makes up what we consider to be a "traditional" wedding strikes me as reminiscent of the age when women were a form of chattel, not just engagement rings. There's the white dress, the father giving the bride away, the taking of the husband's last name... All do a disservice to the love they are meant to express by taking the focus off those feelings and placing it on price tags. Plus, I always lose rings.

A rock -- even a giant, gleaming one -- is a neutral, eyeless thing upon which we can ascribe any meaning. It is through this kind of repurposing and redefining that any tradition withstands the changing expectations of an advancing culture. No one must buy an engagement ring to get married, but it seems pretty extreme to suggest that those who offer one are in some way aligning themselves with the expectations of a circa 1650s -- or even 1950s -- marital contract, instead of enacting a well-intended and emotionally vulnerable gesture of love and devotion.

I suppose an engagement ring could also be an acting out of materialism and financial one-upsmanship. But so too are many other contemporary circumstances surrounding weddings: The thousands of dollars of investment required by bridesmaids, the lavish destination weddings, the financial expectation for wedding gifts that outpace economic realities. Why does the whole blame for the wedding industrial complex fall on the ring finger of the bride and not, say, on the other willing participants? Or Pinterest? Or capitalism?

I’d wager, more likely, that a ring is an issue of contention because it is an object worn publicly. And the public behavior of women is treated, time and again, as a sort of a performance of their cultural role. So let's go easy on this one. Because shouldering the burden of Where Women Stand is no small matter. 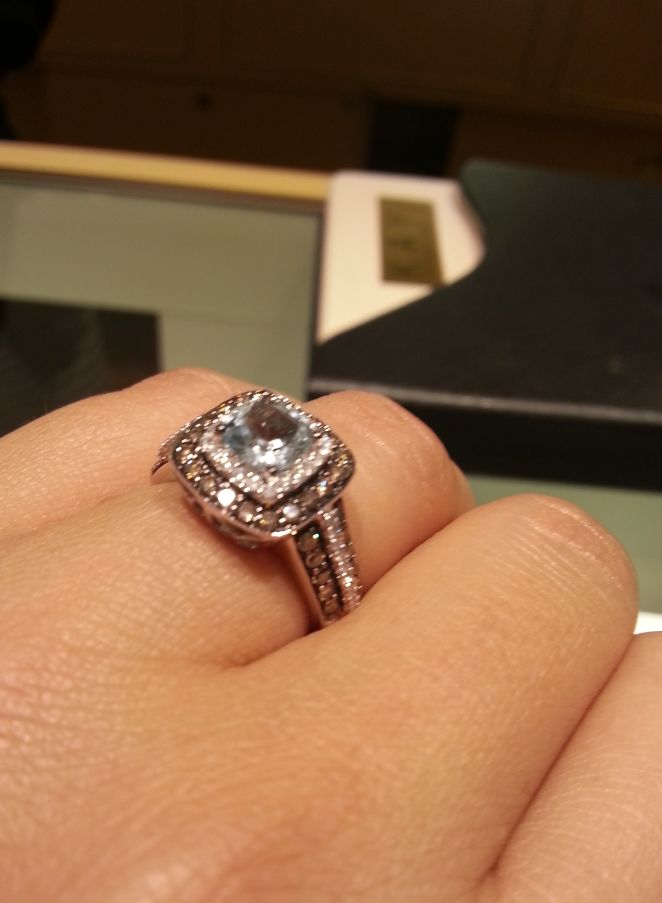 1 / 21
"My ring is aquamarine and chocolate diamonds. Aquamarine also happens to be my fiance's birthstone, so both of us are in love with my ring." - Carla Vestal