Though Tameka Lawson has been practicing yoga for only a bit over a year, the art form has already made a big impression on her life and on the Chicago community she calls home.

Lawson is the mother of three small children and the executive director of I Grow Chicago, a young nonprofit based in the city's notorious Englewood neighborhood and focused on providing a haven for at-risk community members. Her hectic lifestyle was wearing her down and she knew something had to change.

"I was at a point in my life where I just needed to be still. I could not slow down. Even when I would slow my body down, my mind would still be racing," Lawson told HuffPost. "I wanted to find my center, where I could calm myself down to be present and not have the worries of the day or the next task overwhelm me." 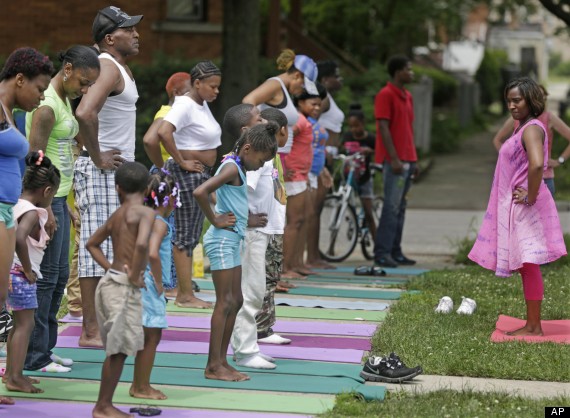 Not long after she took up yoga, the student became a teacher as she began to lead classes for youth in Englewood through her organization.

Initially, the classes took place inside the five area schools her group works with as a means of helping the young students cope with the stresses of their environment. While Lawson does go through basic yoga poses and breathing exercises with her young students, the lessons she hopes they will take away from her work extend far beyond the practice of yoga itself.

Built into each class, she says, are elements of art therapy, motivational speaking, mentoring and job skills. Yoga is simply the gateway to that information.

"There are lots of elements causing these youth to have stress," Lawson said. "We want to get at the center of these youth and give them a moment to breathe in a way that will change the way they react and process things."

The classes have been such a hit that Lawson and her group have taken their show on the road -- or, more specifically, to the street. They've held regular, free community yoga classes on a blocked-off stretch of 64th Street, and are also offering free lessons the first Monday of every month at Kusanya Cafe.

On Saturday, in a partnership with the neighborhood's annual back-to-school parade, I Grow Chicago is hosting the first-ever Englewood Yoga Fest at the the Peace House, the organization's community headquarters. 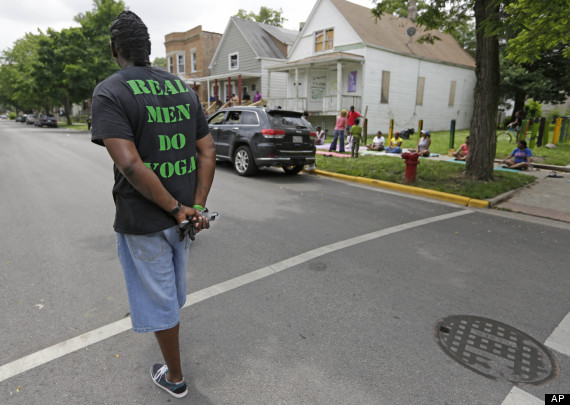 Andres Brown, a member of I Grow Chicago, looks on during a yoga class. (AP Photo/M. Spencer Green)

Others outside of the South Side neighborhood are also beginning to take note of Lawson's work through I Grow Chicago, which also runs a community peace garden and offers a swath of other art, mentoring and job programs. Lawson and her colleague Shango Johnson, I Grow Chicago's youth male coordinator, were chosen this summer to serve among only 28 delegates from North America in the United Nations' inaugural World Conference on Indigenous Peoples next month in New York City.

Her group's yoga offerings have not been without critics, of course. Some have questioned the level of impact such programming can have on the neighborhood's struggles with violence, poverty and gangs. Thursday night, three men were wounded in a shooting about a mile and a half southwest of the Peace House. Last week, a 16-year-old girl was fatally shot in the neighborhood. 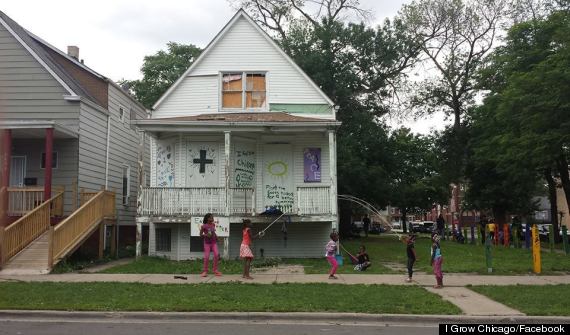 Lawson emphasizes that she sees her group's work as part of a much larger puzzle when it comes to addressing the very real issues facing her neighborhood.

On Saturday, Lawson plans to cap off the yoga fest with what she's calling a "meditation for peace" and safety for Englewood's youth during the upcoming school year.