People-eating sharks whipped up in a tornado, Manhattan as an ice-capped frozen wasteland, and solar flares that rapidly increase the temperature of the Earth's core resulting in cataclysmic earthquakes, volcanic eruptions, and biblical-scale flooding. Over-the-top? Yes. Based on science? Loosely, at best. And that's just fine with us.

Hollywood blockbusters are not science documentaries nor do they pretend to be, they are pure entertainment that recognizes the interest and fascination people have with nature, natural disasters, and the Earth. So go out, enjoy the show. But we hope you'll also take a moment to think about the issues related to the topic at hand. With the summer shark media frenzy already in swing and the upcoming release of Sharknado 2, it is an opportunity to think more about sharks in the real world.

Of the 500 or so species of sharks, few look like the sharks of Sharknado or Jaws. Many sharks never get larger than three feet in length. Sharks don't intentionally hunt humans. We are just not on the menu. Sharks are often skittish and encounters typically peaceful, with the shark ignoring the human. So-called "attacks" are often a case of mistaken identity or a response to a perceived threat. You are much more likely to get seriously injured while driving, toasting a piece of bread or playing sports than when swimming in the sea. And just so we are clear, sharks will never ever be whipped up in a tornado and then drop onto your head.

Given the tens of millions of sharks each year that are killed for their fins, meat, oil, and cartilage, sharks very much have us to fear. Yet sharks are an essential part of the ocean ecosystem, keeping prey species in check and weeding out diseased or genetically weak individuals. Alive, sharks provide exceptional value both in balanced ocean ecosystems and ecotourism opportunities.

Shark tracking and other studies are now revealing where sharks breed and feed. Their low reproductive rates make them vulnerable to overfishing. We strongly support efforts to protect sharks and the habitats they require. The entertainment industry has made these magnificent creatures part of pop culture and brought them immense attention. We hope that as people watch movies about sharks, they will also want to learn more and help protect them. 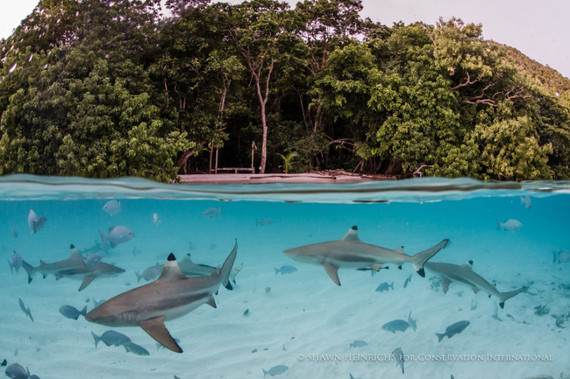 We also hope Hollywood continues to integrate science into movies and television. Sometimes the results are truly transformational. The ever-popular CSI series has led to an explosion in interest in forensic science. Jurassic Park and the Indiana Jones movies inspired a new generation of archeologists. As scientists, such productions give us the opportunity to talk and write about the science involved. Even academic and research programs can benefit when members of the audience decide to get serious about careers or giving.

The marriage of science and entertainment is mutually beneficial, even symbiotic. Of course, we do not support productions that masquerade as real science, but are not based on accurate information or even worse, purposely mislead the audience (such as mockumentaries, which lead the public to believe they are based on factual science).

Here are a few more topics we'd love to see get the Hollywood treatment:

We've got lots of ideas for you, Hollywood. Sadly most of them are based on actual events or scenarios that are not so far off. But thanks. We look forward to the next blockbuster that leads to increased interest and engagement in science and nature of all types. Truth is often stranger than fiction and, we think just as, if not more exciting.

Tell us what science-based scenario you'd like Hollywood to take on!