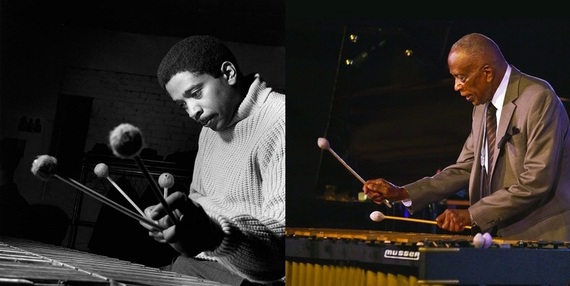 In 2014 NEA Jazz Master Bobby Hutcherson made his triumphant return to Blue Note Records, where the virtuoso vibraphonist had started his career in the early '60s, with the superb album, Enjoy the View. He had recorded a dozen recordings for Blue Note from 1963-70, beginning with his 1963 debut, The Kicker (shelved mysteriously until 1999), and his first issued album Dialogue in 1965, and his 1966 masterpiece, Stick Up!

In regards to Enjoy the View, Bobby told me, "I'm happy to have a recording come out on Blue Note. I've had a long-term association with the label. I'm thrilled to be back here."

The vibrant album, which became Bobby's final outing, came out during Blue Note Records' 75th anniversary year and was produced by label president Don Was, who said,"Bobby not only has an incredible history with Blue Note as the preeminent voice of the vibes, but he still remains the giant of the instrument."

Coming on the heels of the signing of saxophone legend and one-time Blue Note artist Wayne Shorter, which resulted in his stellar live quartet album Without a Net--one of 2013's top jazz albums, Enjoy the View stands as a valuable addition to the classic catalog of the most-respected and longest-running jazz label in the world. "Our goal has been to maintain the underlying aesthetic that has governed Blue Note throughout its 75 years," said Was. "It's very poetic to be doing it with the original guys who helped to define the label. For Bobby, it's more than coming full circle. It's also about guiding the course for the future."

Recorded by an all-star collective of saxophonist David Sanborn and organist Joey DeFrancesco, and featuring drummer Billy Hart, the Hutcherson-sparked group plays seven original compositions that range from cool, gentle grooves to fiery outbursts of exuberance. At heart, the album soars thanks to the divine musical alchemy among the performers--an assemblage of veteran artists who play at the top of their game.

While Bobby is the marquee player who swings hard and romps on the uptempo tunes and soothes on the slower pieces, he modestly told me, "I've always tried to be the person who is able to fit in with the music and add what I think it needs to top it off. What I play on the vibes always seems to be the cherry on top of the sundae. You can't play over the organ or the saxophone, which have more power, so I play softer and add to what Joey and Dave deliver. And Billy, he understands that you don't continually play one tempo. There will be the driving force and the automatic cruise where the ideas fall into place and the funky feel to playing behind the tune and the whip like the back of a hurricane and then the sprint to the finish line. Billy knows that."

Before going into the studio to record Enjoy the View, the quartet performed for four nights at SFJAZZ Center in February 2014. The shows were all sold out well in advance of the concerts that featured tunes from the new album, and standing ovations greeted the band members at the end of each show. Hutcherson, always the joker in the crowd, attributed that to factors other than the concerts themselves. "Sometimes people give applause because they want you to stop," he said. "And you'll get a standing ovation at the end of the show because people have stood up, put their coats on and are ready to leave the house."

It couldn't have been further from the truth.

Enjoy the View turned out to be Bobby's swan song.

Testimony from the band members:

Drummer Billy Hart: "Hutch, he's a magician and a musician. When he hits the mallets on the vibes, something special happens. Recording with him is so inspiring that it's like taking a master class. When I walked into the session, I had no idea what to do, but everything meshed so well."

Saxophonist David Sanborn: "It was so great to discover the collective spirit of the session. I had never played with Bobby before, so it was a thrill to play with him. It was like going to graduate school. And even though I've known Billy for 30 years, I had never played with him either. It was so much fun recording with these guys. It was loose and flexible and it was like we were having a four-way conversation. When that happens with no egos, everyone talks. We were all just learning the tunes, yet the sessions went so fast. It was, blink your eyes and we're done. That experience was worth everything to me."

Hammond B-3 organist Joey DeFrancesco: "Bobby is the greatest vibes player of all time. Milt Jackson was the guy, but Bobby took it to the next level. It's like Milt was Charlie Parker, and Bobby was John Coltrane."

The Top 5 Summer Jazz Festivals Across the Northeast