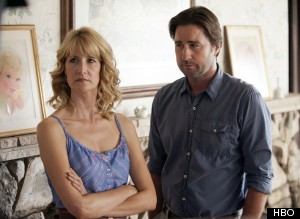 The rebirth of "Enlightenment" (Sundays at 9:30 p.m. EST on HBO) is quietly stupendous.

The show's must-see second season is one of the best stories I've experienced in a long time (HBO sent all eight Season 2 episodes for review). And -- appropriately for a show about a woman who wants to live a more vivid and connected life -- it is an experience.

"Enlightened" is a show that trusts itself to make small gestures and spend time on quiet observation, and it ultimately succeeds at one of the hardest but most important things any story should do: It brings you inside in the emotional state of the people at the heart of the tale. With its spare visual style and its meditative aesthetic, "Enlightened" evokes a feeling of not-quite-resigned aspiration, a lyrical, guarded sense of possibility. The show is suffused with the sense that what you want is just out of reach and that the dream could be yours if you just wanted it a little more intensely.

"Enlightened" is a work of precision craftsmanship that recalls two very different cable classics: It has the large-heartedness and aching love for the misbegotten that you find in David Milch's "Deadwood," and it has the mastery of tone, theme and visual style that typifies the best seasons of "Breaking Bad." It uses a rational, honest yet warmly compassionate eye to examine profound questions: When does it makes sense to give up on big dreams and be thankful for the narrow slice of existence that life has allotted you?

Is it hubris to want more, or human nature?

This season, "Enlightened" wraps that question in a taut story about corporate malfeasance, and the sense of forward momentum is a welcome change from the show's meandering first season. But the well-calibrated plot doesn't upset the show's beautiful, delicate balance between resignation and hope; each episode unfolds like an evocative short story destined to linger in your mind for days.

It takes a great deal of restraint to evoke such bittersweet feelings so consistently, especially when you consider that the show's lead character takes up a lot of space. But Amy Jellicoe (who's played by co-creator Laura Dern) is probably the reason the show is generally minimalist in its approach; for other aspects of "Enlightenment" to compete with her unruly nature would be a mistake. In a delicious irony, the show uses nuance to reveal -- and almost revel in -- her lack of subtlety.

We all know someone like Amy. She's the person who will get up in your face at a social event even if you're not well acquainted. She ignores or downgrades the rules of polite behavior because she burns with a single-minded intensity that often blinds her to how she's coming across. She doesn't ask you to follow her on Twitter, she demands it.

Yet she's not all bombast, and this season in particular, Dern brings a yearning, self-doubting quality to her that is transfixing. Ultimately, you see why various people can't quite evict Amy from their lives: She allows them to see something more than the bland, mundane world around them, and she assumes they are braver and better than they are. She questions why the world is the way it is, and believes she can change it, and yet she wonders, as the people around her do, if she truly wants to do good or if she just be validated as a good person.

The characters on "Enlightened" -- Amy, her friend Tyler (played by co-creator Mike White, who wrote and directed most episodes), their boss Dougie (Timm Sharp) and her ex Levi (Luke Wilson) -- just want to be noticed, they just want to matter to someone. Don't we all?

Storywise, the second season of the show is a big improvement on the first, in part because Amy's obsessions are wedded to that well-paced plot about corporate malfeasance. The contemplative tone remains, but there's less talk of New Age concepts and more unsparing demonstrations of what happens when idealistic theories and principles meet the messy realities of human behavior.

That's also the source of much of the show's dry comedy; Dougie in particular evolves into a douche that you can't help but love. Well, not "love," but the more you get to know this bombastic cubicle overlord, the more likely you are to forgive him for his particularly unfortunate haircut. Dermot Mulroney is also extremely good as a reporter Amy comes across; Mulroney gets the character's mix of battered idealism and self-aggrandizing ambition exactly right.

Voiceovers are crutches on a lot of other shows, but here, they're not used as exposition dumps, and I began to look forward to these spare monologues, because they're so often poetic and moving. That's not to say that "Enlightened" is a gauzy trip to the land of woo-woo self-absorption -- Amy is self-absorbed, of course, but she's also willing to risk everything in the way that holy fools have from the beginning of time. This show is so gentle because it's ultimately about exposing raw pain.

In any case, the show isn't about just her and the flaws that keep tripping her up. The third episode of the season focuses on Levi's trip to rehab; it's is an astonishingly perceptive short film about the pleasures and despair that fuel addiction, and it contains some of the best work Wilson has ever done. Becoming more enlightened usually involves facing a lot of internal and external ugliness, and the show doesn't judge people for running from that, and that's what I love about it -- "Enlightened" has such compassion for its characters, even as it tenderly exposes the least likable and weakest parts of them.

The fifth episode focuses on Tyler's existence, which consists of a featureless apartment in the Valley with cheap furniture and blank walls. The show never pulled any of the usual TV moves to make me like Tyler; it just observed his beige existence and allowed me to see hope flicker in his eyes as Amy drew him further into her schemes. He knows that Amy is probably going to end up in a great deal of trouble, but he can't resist the unpredictable possibilities that she brings to his life. Something -- even something dangerous -- is better than nothing. Unless you're left with nothing, which is a real possibility for all these people.

Tyler's grey sadness is safe, as is Levi's belligerent dissatisfaction and the dignified resignation of Amy's mom (Diane Ladd). Amy doesn't want a safe life, however, and that makes her both obnoxious and admirable. The miracle of "Enlightened" is that by the end of the season, I saw how inseparable these qualities are: "Wanting more" is almost never a pure expression of altruism -- it's a form of imposing one's will on the universe. Wanting to change anything at all is bound to piss someone off.

"Enlightened" made me afraid for Amy, because life's jackals always sniff out people like her -- the ones who are willing to throw away what little they have in pursuit of some cockeyed idea. Amy's dreams are dangerous, but to her, not dreaming at all is worse. "Enlightened's" brilliant second season, which is a controlled, perceptive exploration of the importance of passion and rule-breaking, explores that conundrum with an exceptional amount of discipline, humor, sensitivity and intelligence.

May it experience many more reincarnations.

In this week's Talking TV with Ryan and Ryan podcast, Ryan McGee and I discuss "Enlightened" and the FX comedies "Legit" and "Archer," which arrive Thursday. Other recent podcasts focus on "Arrow," "1600 Penn" and "Banshee." The podcasts are available here, below and on iTunes.