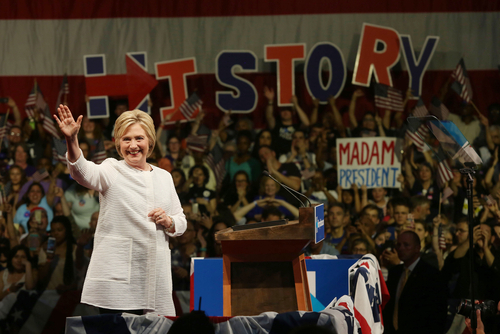 Just when we thought we were finally moving on to issues of substance, those damned emails (as Bernie Sanders, in one of the most spontaneous moments of the primaries, called them) are back in the news. Like Freddy Kruger, they just won't die--because the media won't let them.

This time, they were reincarnated by the Washington Post, who gave Clinton four "Pinocchios" for trying to correct Chris Wallace in a Fox News Sunday interview on July 31. Wallace had said, inaccurately, that "FBI director James Comey said none of those things that you told the American public were true." But Wallace was either uninformed or lying, for Comey had said nothing of the sort. Rather, he said (in the July 7 congressional hearing that followed his public announcement of the results of his investigation) that he wasn't "qualified to answer" the question of whether Clinton had lied to the public." What he did feel qualified to answer was whether her answers to the FBI were truthful, and on that issue he had replied that "we have no basis to conclude that she lied."

What did Clinton reply that got her pantsuit set on fire? Instead of quoting Comey's lawyerly "no basis to conclude that she lied," she answered in terms ordinary people use and said Comey had said, "her answers were truthful." She then went on to connect the dots between her FBI testimony and what she had said to the public, describing them as "consistent" with each other. Complicated, perhaps. Requiring a bit of thought on the part of listeners, yes. But a lie? Give us a break.

Yet the saga of "Lying Hillary" goes on and on.

Believe it or not, it's a relatively recent caricature. Despite a lifelong career of public service, scrutiny, and pseudo-scandals, "Hillary the liar" only began to exist after she announced her run for the 2016 presidency. Before that, "crooked", "lying", and "untrustworthy" were NOT among the adjectives used by her political enemies in describing Hillary Clinton. This woman who they now call "liar" was virtually uniformly trusted by colleagues on both sides of the aisle and considered one of the most admired women in the world. Just prior to running for the presidency, she had an approval rating of 66%.

As far as truth-telling goes, Clinton's record for truth-telling is rated by Politifact as better than Bernie Sanders'. Her most famous recent "lies," moreover, are in fact not lies at all, but attempts -- admittedly, not always successful -- to respond to complicated issues without inadvertently stepping into the muck that she knows continually awaits her in the press.

On her use of a personal server, for example, there are no clear and simple answers to be given, because the system itself is messy and inconsistent: no clear-cut "rules" governing communication between and among persons and agencies, continual changes in procedure and operating systems, different determinations of what is classified and what is not, and so on. The system is complex, ever changing, and hard to keep up with.

When Clinton first claimed on television that she had neither received or sent any classified emails on her private server, it wasn't clear whether she was referring to her own assessment or some official stamp. Shortly after, she clarified that she had meant "emails marked as classified." The clarification is crucial, because it's through a system of markings that the state department operates. Of course, it's always possible for one person (or agency) to deem something "classified" and another person (or agency) to disagree. Indeed, that often happens, as documents travel from agency to agency and their content gets reinterpreted. Classification is a moving machine, which stopped at Clinton's desk marked in a certain way. She relied on those markings; how else could she -- or anyone else in her position -- operate?

FBI director James Comey, however, mentioned none of this when he claimed that Clinton, contrary to her statements to the public, had received 110 classified emails (out of 30,000 the FBI had recovered.) Please note: the emails he referred to had no "classified" headings when Clinton received them. Yet the GOP and the media jumped all over what they saw as confirmation that Clinton had lied, without allowing themselves a moment to examine Comey's words with care. Clinton, they pointed out, said she didn't send or receive any emails marked classified. But Comey said she did: 110 of them!

"It's a complete political indictment of her conduct," declared Kristen Welker. "A direct disputation of the stories she's been telling."(Chris Cillizza) Demonstrates that "trust and honesty continue to dog the Clinton campaign." (Chuck Todd) Claiming that Comey had "completely disputed Hillary's claims," Andrea Mitchell predicted "grave political problems" for Clinton (which she, of course, was helping to make happen.) By the time Joe, Mika, and Nicole Wallace got in on it in the morning, it had become, predictably, a tale of bold-faced deception on Clinton's part.

Having branded Clinton a liar, the commentators seemed to miss the part in the subsequent hearing where Elijah Cummings, pressing Comey, got him to admit that only three of those 110 emails had any kind of markings on them at all. Those three, moreover, were marked (mistakenly, as it later turned out) only "internally," with tiny letter symbols pertaining to specific sentences within the emails.

So: None of the 30,000 was clearly designated in a subject line as "classified" or "confidential." NONE. Just as Clinton had said.

Where, then, was Clinton's "lie"? In fact, Clinton didn't lie; Comey did (or, to be generous, sidestepped the truth.) Ultimately, this was revealed. In his earlier statements, Comey (a Republican) had dismissed the importance of the lack of markings, claiming that the emails contained "subject matter" that "any reasonable person should have known... had no place in an unclassified system." But in the congressional hearing that followed his public announcement, Comey, questioned by Congressman Matt Cartwright, was forced to admit that markings were precisely at issue, exonerating Hillary not only from any crime but also from the charge of lying:

MATT CARTWRIGHT: "You were asked about markings on a few documents, I have the manual here, marking national classified security information. And I don't think you were given a full chance to talk about those three documents with the little c's on them. Were they properly documented? Were they properly marked according to the manual?"

MATT CARTWRIGHT: "According to the manual, and I ask unanimous consent to enter this into the record, Mr. Chairman."

CHAIRMAN: "Without objection so ordered."

MATT CARTWRIGHT: "According to the manual, if you're going to classify something, there has to be a header on the document? Right?"

MATT CARTWRIGHT: "Was there a header on the three documents that we've discussed today that had the little c in the text someplace?"

JAMES COMEY: "No. There were three e-mails, the c was in the body, in the text, but there was no header on the email or in the text."

JAMES COMEY: "That would be a reasonable inference."

There is nothing better than an actual transcript to correct the record. The appropriate "header," far from being insignificant, turns out to be required of all classified documents. Which of course makes sense. How could any system of classification operate without such headings? Would it not be chaos?

Ellen Tauscher, who served as an Under Secretary in the State Department until 2012, objecting strongly to Chuck Todd's characterization of the marking issue as "a technicality," made this clear. The separation of emails into classified and unclassified piles and marked accordingly -- prior to Clinton receiving any of them -- was taken with utmost seriousness and done very rigorously. Indeed, there is no other valid means of identifying a classified document.

For any viewers relying on cable "news" -- MSNBC as well as Fox -- these exonerating exchanges never happened. But then, we know the press doesn't like Hillary, largely because she avoids talking to them, having been burned badly from the early days of Bill's presidency, when her spontaneity and forthrightness was rewarded by misogynist gasps over her ambition to actually contribute to the work of government. And then, too, "Hillary the liar" has kept alive everything the media needs to keep viewers watching: the sense that there is a genuine "horse race" to breathlessly follow, the possibility that more news about her deceptions could break at any time, and an easily digestible, scandalous capsule of characters -- "the most unpopular, least trusted candidates in history" -- to refer to in their ongoing soap opera/reality show version of the election. At the same time, "Lying Hillary" reassures them that they are offering "balanced" coverage between Trump and Clinton -- a paradigm that's becoming more absurd all the time.

We expect Trump to serve up whatever foul dish he can concoct. But every time we hear a commentator refer to Hillary's statements about her emails as "lies," we wonder if they've heard the same English sentences that we have, or viewed the same hearings. Maybe, like Trump, they get their information from other reporters' headlines. Maybe, like teenage gossips, they simply seize on what's hot and never question whether it's true. Perhaps investigative journalism is a thing of the past, and what's left in its place is "breaking news, tabloid style." The longer the "Lying Hillary" narrative lasts... the closer the race. The closer the race... the higher the ratings. The higher the ratings... the higher the advertising dollars.

We give mainstream media a "Pants on Fire" rating on the claims that Hillary lied about her emails.

Susan Bordo is the author of many books and articles in cultural history, most recently The Creation of Anne Boleyn. She is currently writing a book about Hillary Clinton. Thom Palmer is a freelance political writer residing in Southern California. His work can be found on dailynewsbin.com or on his blog "Thom Palmer - Truth in Politics"


A longer version of this piece appears on http://bordocrossings.com