Business leaders interested in the future of enterprise technology should stop thinking of "the cloud" as a noun and start thinking about "clouding" as a verb.

When we talk about cloud computing in general, we're describing a set of efficiency principles only applied to once stateful compute and storage resources that are now stateless and liquid. We do not automatically think about resources other than storage, compute (and recently network) being stateless as well.

Clouding is not new, and compute, storage and network are not the only things that can be clouded.

Although the cloud concept has taken hold in enterprise technology, it's not entirely new to other parts of life. One could argue, for example, that condominiums and hotels were early multitenant housing clouds. Airbnb are modern versions of housing clouds delivering housing as a service, and similarly, Zipcar and Uber are car clouds, offering consumers transportation as a service.

Anything can be clouded, if we put our minds to it. The clouding of compute resources gave rise to infrastructure as a service (IaaS), platform as a service (PaaS) and software as a service (SaaS). To make clouding meaningful, we can't stop there, and we have not, we are clouding storage quickly and successfully. This explains the success of Box, DropBox, Apple's iCloud, Google Drive and others.

A modern enterprise with everything as a service. 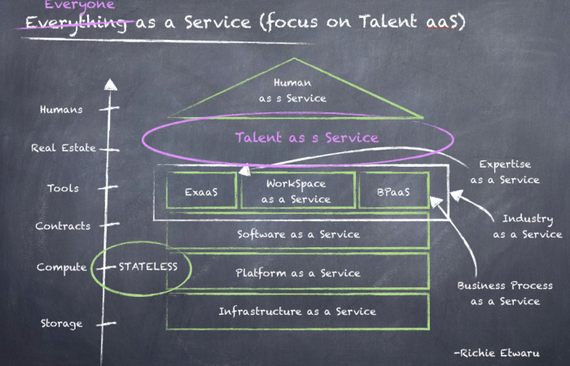 In the new world of leading enterprises leveraging EvaaS, workspace can be a service (WsaaS); expertise can be a service (ExaaS); and business processes can be services (BPaaS). We can roll all three into an overarching industry as a service (InaaS) capability eventually delivering on the age old promise of standing up "XYZ in a Box" type businesses. When everything is a stateless and a liquid service, entire environments can be orchestrated for specific jobs, demands, roles or expertise, creating the opportunity to eventually leverage humans as a service (HuaaS). HuaaS would be game changing to how companies procure, leverage, and strategically execute on their most valuable and expensive resource, human capacity.

Employees working in enterprises are currently stateful reservations of human capacity, assigned to tasks needing their primary expertise and controlled by a single manager. Many times if an employee possess expertise outside her primary area of business, she is unable to contribute in other areas where that expertise may be needed shackled by a stateful role, manager, and job description. Today's employment model only takes into account the primary talents of an individual and ignores the reality that humans are generally multidimensional and useful outside the scope of their stateful roles.

This means valuable human capacity is often wasted corollary to historic pre-cloud wasting of valuable compute and storage resources before clouding was introduced. If human capacity were aggregated into a liquid pool of stateless supply as enterprise TaskRabbits, or eLances, or TopCoders, it would allow companies to spin up and tear down human capacity to meet the human resource demand of projects all on the fly. Much like enterprises now spin up and tear down compute and storage resources needed.

We may not move clouding all the way up the enterprise resource stack right away to humans as a service, but companies that move furthest and fastest into clouding up the stack will engineer the agility and on-demand operating models they need to win. In other words if you aim for human as a service and a cloud of human talent, you will find it easy to think past only compute and storage clouds.

To get started, simply replace cloud as a noun and use clouding as a verb to drive discussions around everything as a service, both inside and outside of technology.

Consider this scenario: My connected car needs a new alternator, but instead of my car accessing my calendar and making an appointment with the service center (which would be cool), it broadcasts its alternator replacement demand to a supply of local clouded mechanics possessing the necessary expertise (ExaaS) to change said alternator on said model of car. Those with the ability to accept my warranty (BPaaS) would bid on the demand/job, and then work with a supply of mechanic shops to find an available automotive hydraulic bay (WsaaS) and tools to work on my car on a time we agree on. What would this scenario mean to an automobile manufacturer's need to have stateful/dedicated service centers and dedicated/fulltime auto technicians on staff?

When everything is a service, it's easy for enterprises to achieve efficiencies that we now only dream of. Imagining an EvaaS future is thrilling. I predict that by 2020, global enterprises with large allocations of knowledge workers will have commercial grade, human-capacity clouds leveraging ExaaS, WsaaS and BPaaS.

To do so, we have to collectively get over the hoopla of only the compute and storage clouds, and starting thinking about clouding everything else.