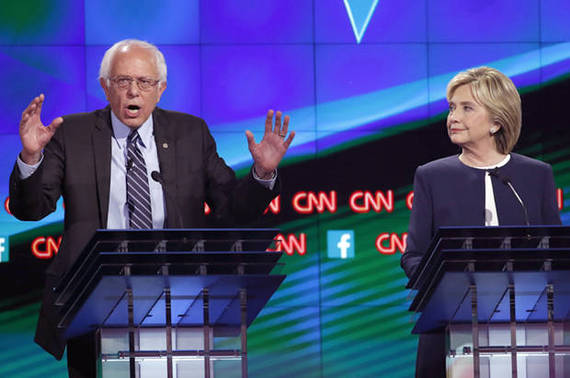 Simply answering questions without being able to dodge contentious issues doesn't account for a win, nor does it make a candidate "presidential," "polished" or poised. The standard in American politics has been set lower than ever before, especially when a candidate's correspondents are being investigated by the FBI and other intelligence agencies, yet some observers declare this person a winner. Hillary Clinton did a good job of remaining confident during heated exchanges, however the questions themselves were indicative of why Bernie Sanders was the clear victor.

Fortunately for Clinton, Bernie Sanders refused to address the FBI's investigation of her emails. This allowed the former Secretary of State to miraculously circumvent relevant questions about Russia-linked hackers who tried to access Clinton's private server.

There used to be a time when Russia-linked hackers were bad for a presidential campaign, but alas, this is 2015 and everything is relative. To some voters, the Pentagon gets hacked, so who cares if Clinton used a private server?

As for character, yes, one candidate was confident amidst perpetual scandal, which endeared her to a base longing for some semblance of humanity in their presidential hopeful.

Bernie Sanders, however, did something unprecedented in American politics. While Hillary Clinton wasted no time in trying to make Sanders look like Ted Nugent on gun control, the Vermont Senator took the high road on emails.

Hillary Clinton was given an early Christmas present and was allowed to escape five to ten minutes of tense questioning about private servers and decision making.

Only poor Lincoln Chafee dared mention that he was scandal-free and ethical; we know why he stated those words. In a bizarre version of collective amnesia, nobody mentioned the Clinton Foundation weapons deal controversy. The Huffington Post explains that, "Even by the standards of arms deals between the United States and Saudi Arabia, this one was enormous."

Not one candidate questioned Clinton about foreign donors, Clinton's sever being hacked by China and other countries according to POLITICO, or the lack of judgment associated with not being able to type an email without nationwide controversy.

This was a gift.

It's also a gift that Trump or someone else won't give in a general election.

At least five minutes or more of being on the defensive was averted, only because Sanders was noble enough not to do what Clinton tried to do to him over gun control.

Although Clinton would never have refrained from pouncing upon a rival's scandal, Bernie's "Enough of the emails!" was actually quite masterful.

As a result, this act of counterintuitive politics will enable Sanders to overtake Clinton in national polls, most likely before the Iowa Caucus.

First, let's look at Bernie's impact on social media; a grossly underrated measurement of public opinion. Time's online poll consisting of 274,473 votes on October 15, 2015 showed 59% of respondents felt Bernie Sanders won the Democratic debate, while only 12% sided with Hillary Clinton. Granted, this data isn't as scientific as the CNN/ORC poll showing Clinton's support among women voters dropping from 75% in December of 2014 to 51% (Sanders is up to to 27% from only 2% in December of 2014) by the end of August.

Out of around 30,000 respondents, the MSNBC poll shows 65% believed Bernie Sanders won the debate (only 11% for Clinton) with Martin O'Malley receiving only 375 votes. Likewise, these results aren't as accurate as a poll conducted by Google Consumer Surveys for IJ.com, showing Sanders ahead of Clinton nationally.

Thankfully, pundits and political wonks (who failed to even imagine Sanders being a challenge at this point) can't win elections. Americans, not Wall Street or the media, decide the course of our democracy and Bernie Sanders has surged from 0.08% on June 1, 2014, to now 27% according to CBS.

One look at the HuffPost Pollster interactive chart explains why polling trajectory shows Bernie Sanders winning the Democratic nomination. Factor in the FBI investigation and Bernie's fundraising, in addition to his empathy during the debate, and you'll see why Sanders wins in 2016.

If you think this is hyperbole, then explain how a candidate with practically zero support jumps to 27% support in three nationwide polls, without media attention or super PACs. Then explain how Clinton goes from 60.8% support on May 10, 2015 to as low as 42% support in several polls by October, with billions and worldwide name recognition.

Also, if you can explain how Clinton wins, without the support of women, then you know something polling experts don't. One expert is quoted in The Daily Beast as saying that Clinton "needs to get closer to 58 percent to 60 percent among women and right now she is nowhere near that." She's currently at 51% support.

As for a potential mutiny of disgruntled Democrats unhappy with a Clinton nomination, CBS News writes that "Fourteen percent would not support her in a general election."

This 14% of Democrats who currently "would not support" Clinton could rise to an ominously high number in a general election; some progressives will simply write in Sanders or fail to show up to the ballot box in protest. CBS News also writes that, "Just under half of Democratic primary voters nationwide say they would enthusiastically support Clinton if she became the party's nominee."

Furthermore, when the deceased ask mourners not to vote for Hillary Clinton, and ask mourners to cast their vote for Bernie Sanders, the DNC should worry. As The Huffington Post writes, one Miami woman told family and friends the following before she died:

"In lieu of flowers, donations may be made to the Bernie Sanders presidential campaign."

As Bernie Sanders pointed out, Democrats must remember that Republicans win with low voter turnout.

And among voters under age 50, Clinton has fallen from majority support to a near even split in the new poll, 37% back Clinton while 39% favor Sanders.

Therefore, when Clinton's support has eroded among liberals, voters under 50, and men, then Bernie Sanders is poised to overtake Clinton after his debate performance.

As for the debate, The Chicago Tribune's Editorial Board agrees with my assessment. A Chicago Tribune article titled Bernie Sanders' night: Authenticity wins the Democratic debate highlights one of Clinton's answers that should have warranted clarification:

Thus far, the only thing getting done is the FBI investigation of emails, servers on a cloud, and debate over intelligence classifications, therefore "getting things done" seems a bit odd considering Republicans will never work with Clinton. Regarding Libya's civil war, Clinton simply refused to answer the question directly during the debate.

I bring these issues up not because some people misinterpret a Rand Paul article I wrote last year to mean I'm a closet Republican; I'm a lifelong Democrat against perpetual war. True, a rare breed nowadays. Of course, if a Democrat is willing to vote for a president with neoconservative advisers (without understanding the irony) this type of voter couldn't possibly see why I wrote last year's article. Also, I'm only voting for Bernie Sanders and I'm not getting paid by the Koch brothers (someone accused me of this on Twitter) or affiliated with the Sanders campaign.

With President Obama keeping troops longer in Afghanistan, the next president will have a grandiose decision pertaining to American counterinsurgency wars in the Middle East.

President Bernie Sanders says "I'll be damned" if Americans are sent back to Iraq.

We know what President Hillary Clinton would do pertaining to the Middle East.

Most importantly, only one candidate mentioned Sandra Bland, youth unemployment among African-Americans and Latinos, and racial justice. This is the biggest reason Bernie Sanders won the debate and it's another reason he'll overtake Clinton in polls. With more debates ahead, and with Iowa, New Hampshire and South Carolina poised to become part of U.S. history with their role in the 2016 election, Bernie Sanders should surpass Clinton in nationwide polls before February.