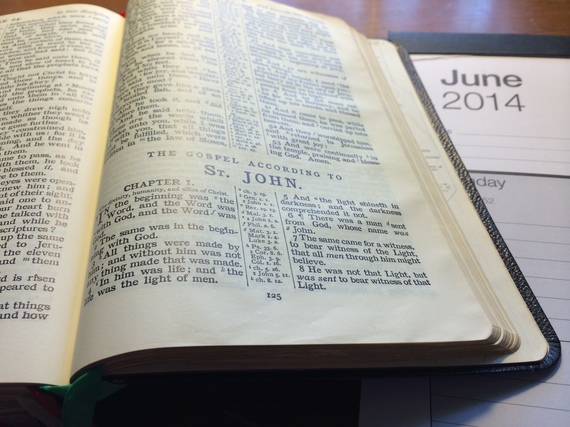 The New York Times regularly features interviews with authors about books that have influenced them. A few weeks ago The Times asked Colton Whitehead what book he felt that he should like but didn't. He responded saying that, "The Bible left me a little cold... Maybe I came to it at the wrong time?"

He had a few complaints: first, at the time he had been reading "dirty realism" and so he did not like the fantastic elements, especially angels. He objected to the various different points of view, the way that the narrative jumped around in time, and especially the genealogies.

In short, it seemed as if the Bible was hard for him to understand because he didn't see that it is more like a library filled with different genres and authors who wrote for people in very different cultures over the course of centuries. He did not grasp the historical context well enough to appreciate what those lists of names might mean. For instance, Whitehead has no way to recognize what Matthew is trying to say about a Messiah whose genealogy refers to patriarchs and kings, but also to a prostitute, foreign women known for (in the words of my study Bible) "irregular sexual unions," and a child born out of an adulterous relationship.

Some literary and cultural worlds are easier for us to enter than others. This is also true of the various worlds of the Bible. The Gospels (the Greek word for good news) are our primary source for understanding the life of Jesus. The three synoptic gospels Matthew, Mark and Luke share a great deal in common and seem to rely on similar source material.

John, the author of the forth Gospel, has very different concerns and style. Of all the books in the Bible it may have the greatest influence on what Christians believe. This does not make it easier to talk about John.

While I love John's longer stories about the wedding feast at Cana, the Samaritan woman at the well, etc., many of his readings which we hear in church involve long repetitive speeches. John uses words that shift in meaning and are difficult to understand. Also because of the long history of Christian anti-Semitism the way John sometimes refers to "the Jews" makes me distinctly uncomfortable.

Finally, this gospel lies at the heart of many fundamentalist pictures of Christianity. Of all the biblical authors John can most easily be misread as if the good news is that the other people who disagree about Jesus are doomed to hell. Many simply assume this exclusivism when they hear Jesus say, "I am the way, the truth and the life. No one comes to the Father except through me" (Jn. 14). I cannot believe that life is a desperate struggle to get everyone else saved by thinking the same thoughts about Jesus.

Despite these barriers I love John, in part because of my friend Herman Waetjen a New Testament scholar who recently retired from San Francisco Theological Seminary. Over the span of our life we grow and change. In this process Herman has given back to me the Gospel of John.

Herman would say that if Colson Whitehead is seeking realism, John will disappoint him. Herman writes that John creates, "an independent, self-contained and systemic universe with its own structures of time and space. It is not a copy of the world in which it originated." John draws readers out of our own culture to confront another world that we participate in making as we read.

John is not writing about the past. This is not like a newspaper report, not a record of what already happened. John's goal is not to tell a compelling story but to communicate an experience, to change our present and future - to make us radically new.

We carry with us mostly unexamined pictures of how things are: for instance, that we inhabit a dead universe, or increasing inequality is destroying the foundations of our democracy, or the economy always needs to grow, or government stifles initiative. Whatever our models of how things are - John gives us something different.

In the alienated world of our daily experience people cannot even see God. John helps us to trust God. John gives us a new reality, a new possibility - Jesus. Jesus becomes all the previous symbols of God's presence. He makes real the highest aspirations that religious institutions signify. Jesus is the "light of the first day of creation." In him the Temple of God has become a physical human being. Jesus is the Passover meal, the incarnate Logos-Sophia (wisdom, order and reason). Jesus is the "I Am" experienced by Moses. But that is not the whole point.

What matters is that because of the connection between Jesus and God, everything that Jesus is, we can be also. God can be completely present in us too. When Jesus says, "[i]n my Father's house there are many dwelling places," we are those rooms. Together, when we are caring for each other and the earth, all humanity makes up the great mansion of God.

Salvation does not merely mean going to heaven after our physical death. Salvation in Jesus means recovering wholeness right now in new resurrected life. It means through the spirit becoming everything that Jesus is in relationships dedicated to humility, reconciliation and love.