ACORN, an umbrella organization of community groups that serves poor people in major cities across the country through housing, legal advocacy, family services, and higher wages, has lost all federal funding, after decades of working for low-income, disadvantaged Americans.

That the House of Representatives has moved swiftly on anything is stunning in and of itself. More stunning, this is in response to a single independent report by conservative activists, with no follow-up investigation, no hearings, not even being provided a copy of the full, unedited video tapes shot by conservative activists James O'Keefe and Hannah Giles at a couple of ACORN offices.

This is serious stuff here. This is not a game of gotcha, of cheap political points, of practical jokes -- not when this is money that helps in many real ways in impoverished communities around our country.

It is vital to assess how this backlash was accepted so quickly in light of videos that were from someone whose films are funded by conservative backers, videos that misrepresented ACORN through editing and not disclosing other failed attempts at their desired response, which may well have been dubbed over, if O'Keefe would dare to release the unedited tapes in their real context to prove otherwise.

A significant reason that this ACORN backlash has moved through Congress like Montezuma's Revenge is that this particular hidden camera stunt had the ring of "child prostitution" in it, which most politicians of either party would run from rather than dispute its irrelevance. "Anyone defending ACORN is for child prostitution" is an immediate fallacious meme. It's not like we're talking about the Catholic Church here, who still gets federal funding.

Noteworthy is that there have not been any previous allegations between child prostitution and ACORN. In this weekend's LA Times, O'Keefe himself asserts that this ruse had nothing to do with prostitution, importing underage sex workers, or tax help for starting up a business.

"Politicians are getting elected single-handedly due to this organization," he said. "No one was holding this organization accountable. No one in the media is putting pressure on them. We wanted to do a stunt and see what we could find." 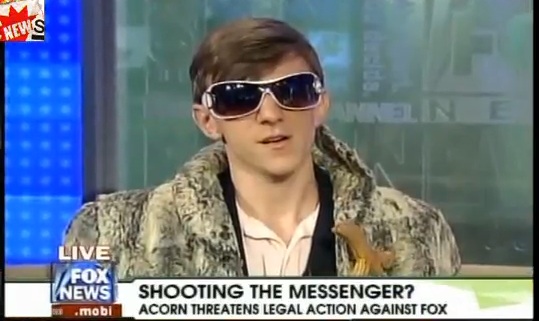 That's what this is really about: the elections, and the threat that has been hyped tirelessly that ACORN is in some way stealing your vote.

Before I digress into the long campaign to smear ACORN because of its successful voter registration, I don't want to be accused of changing the subject to the elections. O'Keefe clearly stated that is what these stunts were about from the beginning.

There is much to dispute in O'Keefe's quote. There is no evidence whatsoever that politicians are getting elected "single-handedly" by ACORN, and it is a wild exaggeration. Many claims of voter fraud are made, few instances ever occur.

What has been distorted is that these allegations surround voter registrations, not actual votes, and that ACORN has regularly flagged forms that were incomplete, duplicate, or unverifiable. By law, anyone collecting voter registration forms has to turn in all that are used, even if they know the forms will not be processed.

Far-fetched is the idea that no one in the media has been putting pressure on ACORN. That O'Keefe would even think ACORN could elect politicians single-handedly is because of FOX News' rampant coverage and conflation of ACORN conspiracies and allegations, to the extent that John McCain worked it into his stump speech by the end of the 2008 presidential election.

The red herring of voter fraud as an excuse to deny others the right to vote is a well-worn claim. Voter suppression, specifically using the fear of "voter fraud" to advance voter suppression, is a topic I have explored and documented in-depth in my documentary Free For All! which you can see online for free right now. I also produced a video about ACORN with Video the Vote focusing on the fraud of voter fraud.

David Iglesias, a Republican U.S. Prosecutor for New Mexico, investigated allegations of voter fraud throughout the state at the urging of Republican leaders, and when he found no evidence and would not prosecute falsely, he was fired, as asserted by David Iglesias in his testimony before Congress and emails recently declassified from Karl Rove.

But again, I don't want to be accused of dodging the issue -- I am just looking to rebut the persistent falsehood which directly affected this kid's motivation to punk a community organization into losing millions of dollars to help the poor.

O'Keefe is comparable to the FBI informant who brought down the Bronx terrorist plot -- only that there would not have been any actual plot were it not for this FBI informant actively recruiting mentally challenged Muslims from mosques for this plot, which apparently involved entrapping people who were dumb enough to listen to him.

So it came to pass that in this effort to dispute voter registration that Giles and O'Keefe conceived of the worst sounding scandal they could invoke, and traveled the country to ACORN offices across the country to find someone to take their time to humor them in the improv game of "Yes, and."

And they eventually found some clueless ACORN employees, people far too eager to offer good customer service than employ any common sense. A couple of workers comply with O'Keefe's outlandish inquiry for underage brothels in dispensing tax advice.

The well-publicized clips are shocking enough, and have been exploited as much as any couple of minutes of video can be. Glenn Beck taunted other networks for not covering it. Even Jon Stewart bunted on it, as if his guest interview were Sistah Souljah. As a potent testament to Stewart's "Most Trusted Newsman" gatekeeper status, the House next day voted to cut all federal funding for ACORN.

It is worth noting here that what transpired on O'Keefe's videotape were conversations about hypothetical situations -- not actual prostitution, no actual crime, and not proof of an agency-wide policy or program involving prostitution or illegal immigrants. In fact, O'Keefe's experiment proves this -- that several other ACORN offices would not be ensnared by their absurd scenario, and turned away these provocateurs. One office in Philadelphia filed a police report because they were alarmed by the pair.

Ironically, the only thing illegal in some of these tapes is that O'Keefe is filming illegally. States like California and Maryland have strict consent laws about surreptitious recording, which is why the news and entertainment industries have long figured out workarounds for hidden cameras. (Hint: Vegas.)

As the crankosphere raves over how the Media didn't uncover this, it is worth pointing out that not only are the tactics against the standard of journalism, the lack of disclosure and misrepresentation pushes this expose well out of the range of journalism and in to the realm of entrapment.

As it was, O'Keefe had to misrepresent a conversation where a woman stated up front that their inquiry was illegal, but played along because she figured it was a gag. Another misrepresentation by FOX was the breathless uproar about a woman who joked that she had killed her husband -- well after it was established that her husband was alive, Glenn Beck, Sean Hannity, and others kept repeating the ridiculous claim for another day, demanding an investigation, since they obviously didn't have the resources as a major news network to confirm that this guy was alive.

Nor is this O'Keefe's first foray into being the Tucker Max of conservative hacks. He pulled a stunt on Planned Parenthood entrapping receptionists and donation reps into conversations where he said he wanted to kill off black people, while his compatriot Lila Rose called and claimed to be underage to see if the clinics would report statutory rape. (Lila Rose just recently called for abortions to be held in public squares to create the mass gross-out that would therefore make them all illegal.)

In a detailed response from Bertha Lewis and Steven Kest :

O'Keefe has a sordid history of preying on receptionists and other front-line service workers for respected organizations. In 2008 he pulled a similar stunt on Planned Parenthood when he and another female colleague secretly recorded phone conversations with staff who handle fundraising calls at a few of the organization's affiliates. During the calls, O'Keefe pretended to be interested in setting up funds for low-income women in need of health care. Once the conversation hit a comfortable stride, O'Keefe would change his tune and explain, in explicit language, that his real intent was to target women of color in an effort to control minority populations. The audio recordings were edited in an attempt to make it appear that Planned Parenthood was complicit in accepting donations for racist purposes. O'Keefe's intent then, as it is now, was to entrap an organization whose mission he is ideologically opposed to, and masquerade his efforts as investigative journalism rather than the propaganda videos they are.

And in college, O'Keefe showed women their place with his video wit, as reported by Media Matters:

As a Rutgers University undergraduate, O'Keefe videotaped a classmate distributing to a Women in Culture and Society lecture a handout that emphasized that a "good wife always knows her place."

And most tastefully of all, O'Keefe drove around posing as a Publisher's Clearing House van offering big checks to people, only to taunt them that the money is what was going to bank bailouts. Black people sure are suckers for that one!

Do not-so-subtly racist or sexist stunts count as courts of law? Shouldn't there be a requirement that they at least be funny, besides mean for the sake of mean?

Is this same adolescent accountability accepted by defense contractors, when Blackwater and its owner Erik Prince are implicated in murder? He just keeps getting contracts. Rep. Darrel Issa from San Diego sent out a letter bragging of cutting ACORN's money for all of us, then asked us to give him money. San Diego has had political scandals that have led to actual convictions, not simply recordings of speculative conversations. Isn't it time to slash San Diego's federal funding? All of this is not to get off subject, though. Whatever angry conservatives want to insist the subject is.

It is natural for many to shirk away from defending ACORN in light of this footage. But this particular exchange is not just cherry-picked -- it was planted, nurtured, and harvested, the latest to take down an organization that empowers the numbers that vote Republicans out of office.