It would be convenient to see WGN America's new series Outsiders as a lucky case of TV art imitating life.

Debuting Tuesday at 9 p.m., Outsiders centers on the Farrells, a small Appalachian clan that's resisting government efforts to force them off the rugged mountain on which they have lived for 200 years.

The government has the law on its side. The Farrells are convinced they're on the side of right.

But several of the key actors caution viewers not to see Outsiders as a drama primarily about resisting government authority, like the current real-life standoff in Oregon.

They say it's broader and, frankly, more interesting. 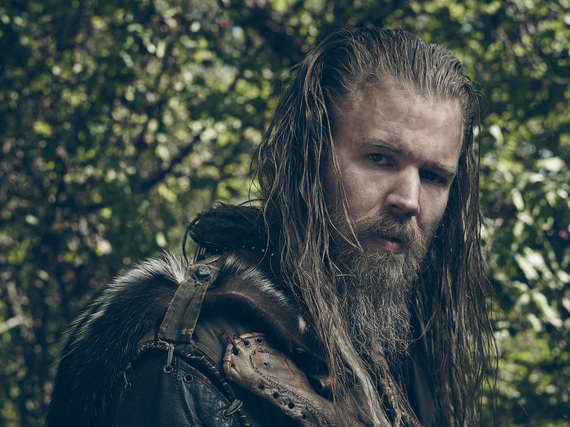 "This is a human story," says Ryan Hurst (above), who plays Lil Foster, one of the main Farrells. "It's about choosing a way of life, about how people want to live. As fast as people travel today, they don't always know where they're going."

The Farrells don't sit on the porch sucking moonshine through their few remaining teeth. They've survived on Shay Mountain for 200 years because they've figured out how to make "off the grid" more than a cry of modern-day exasperation.

They're outliers who have survived everything right up to and including the modern world.

But now, a big arrogant mining company has purchased rights to the mountain. So the "retard hillbilly animals," as the mining company president calls them, must be removed.

The local cops warn him that's a little more complicated than tacking up an eviction notice - that the town and the Farrells have gotten along by the unwritten détente of mostly leaving each other alone.

But money talks, the battle is declared and one of the first unintended consequences is that the two sides start to engage a little more.

You might think that's the scene where several Farrells drive their ATVs into a big-box store, scoop up what they want and drive away. But no, not really. The store owner waves this off, clearly thinking it's smarter to swallow the loss than to try to collect.

The more significant interaction is quieter. A young Farrell named Hasil (Kyle Gallner) makes a hesitant move to buy something from register clerk Sally-Ann (Christina Jackson), and that leads to a friendship that puts human faces on the culture divide . 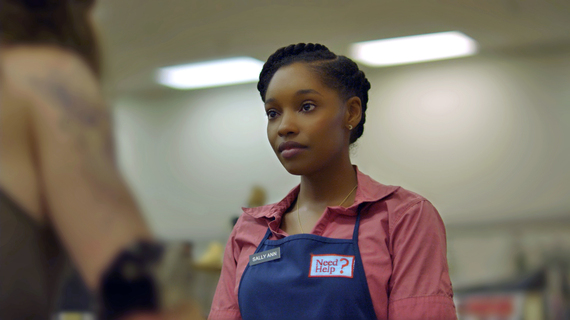 "Since the only world [Hasil] has known is the mountain," says Jackson (above), "Sally-Ann starts to show him how people do things in town. Just everyday things we all take for granted. And a lot of the time he'll say that just seems complicated and unnecessary."

Not surprisingly, that includes technology. Gallner and Jackson liken it to real-life young adults today running into someone who doesn't have a cell phone.

"I can't imagine," says Jackson. "Because so much is available on my phone now, that's where I have almost everything I need. What would I do without it?" 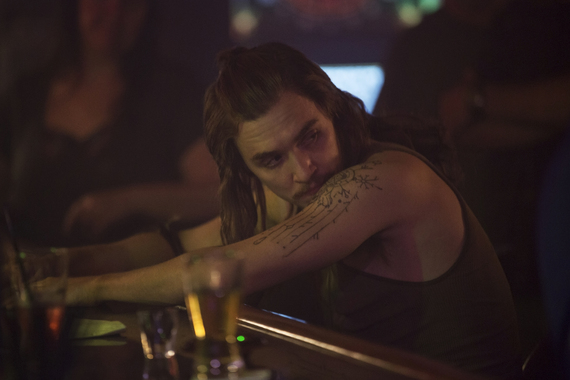 But Gallner (above) suggests that once you get over the shock, imagining life without cell phones isn't unthinkable.

"It's going back to the way things were," he says. "There's something appealing about that. People can get so overwhelmed today that sometimes I think we all wish it would just go away."

Outsiders also reminds us, Gallner adds, that we need to be careful how we define intelligence.

"The Farrells can't talk to you about the X-Box," he says. "But for what they need to do, they're as smart as can be. That's how they stay alive. People like the mining executive think they're dumb. They're not."

That doesn't mean viewers will think everything they do is smart, of course, and Outsiders doesn't overly romanticize their culture.

The Farrells have interpersonal issues, problems and dark sides just like people in town. There are Farrells who will kill other Farrells, and Farrell justice can be a 10-minute process that ends with a grisly amputation.

They are also fiercely loyal, and Hurst says it's fascinating to watch "the way they interact - not just with the authorities, but with each other. It's almost Shakespearian."

The human dramas also may be more interesting because all odds would suggest the eviction story will end badly.

"I don't know that people even want it to end well," says Hurst. "What would that mean? Would all the Farrells get condos?

"Shay Mountain to them is like the Black Hills to Native Americans, and it's all part of our history as Americans. We keep moving forward, but that means we have to take land from someone else."

"They could leave at any point," notes Jackson. "But they've created their whole world up there. How could they go somewhere else?"