If you haven't heard of Mandy Ingber, please read on. If you have, you're in for a treat. The New York Times best-selling author, former Cheers actress, and Los Angeles-based yoga instructor to such famous names as Jennifer Aniston, Kate Beckinsale, Helen Hunt, and Brooke Shields is one of the most articulate and introspective people I've ever encountered. She shares a wisdom that precedes her years, yet she relays it in such a down-to-earth and relatable way. This interview is further proof of that.

It's a pleasure to share this fifth installment of Growing Up and Doing Business With... Mandy Ingber.

What kind of kid were you growing up?

I was pretty well rounded. I was smart, shy, a good student. I liked school. I was creative and artistic and fit into most groups. Fourth grade was a huge turn around for me when I began attending MOBOC, a school for experiential learning. The kids were empowered to create the community and rules for the school over a two week orientation phase. Each week we made academic contracts individually with our teacher. It was interested in teaching us how to learn, not what to learn, and introduced us to concepts from Buckminster Fuller and the Prospero. It was focused on addressing the Whole child. Not just the academic, but the somatic, the emotional, the creative, and the psychological.

Each week we would go on several field trips throughout the city, and write journals after we had interviewed our guide. Academics were done in various libraries throughout the city, and lunchtime was in the various parks. The student to teacher ratio was 10:1 and the entire student body never exceeded 40 children and 4 groups. It was an amazing school. We were encouraged to communicate in "feelings sessions". It opened me up from being a "straight A student" into being the master of my own education. This was a completely empowering experience and at that point I found many more outlets and interests. I became an actress at an early age.

What did you want to be?

In the first grade, an artist, then by third, an astronomer. When I switched schools, I found the dramatic arts and studied acting in an extra curricular class. By age 14, I landed a role in the original company of the Tony Award Winning Broadway show, Brighton Beach Memoirs, by Neil Simon. When I set my mind and emotions...or my "will" to something, I always had the ability to do it.

Who were/are the major influences in your life?

It's really hard to narrow it down. I would say my parents, particularly my father. I was also very attracted to philosophical teachings at an early age. There are so many greats, I hate to exclude any of them. My school and my teachers in MOBOC were hugely influential in my life. Then, as I branched out into the entertainment industry, many of my elders at the time, my co-stars and friends (most of them older) had a huge effect on me. I think, in the end, I have always been trying to get the love from the father.... It's pretty basic. In my striving to do so, I have uncovered worlds.

Tell me about why you started your eponymous brand.

I had to look up the word "eponymous". You know, I have learned that part of my lesson in life is to be me. To be a pioneer, and to be fully myself. It seems that each time I am myself, I end up becoming a leader. My nature is very shy, so it is a bold move for me to do this. That is probably "why", because it is a challenge for me to do so, and the boldness in and of itself should be inspiring for others to be fully themselves.

What were the most challenging aspects of going into business?

I have never thought of it. To be honest, I have never had a 9-5 job where I worked for someone else. As an actor, I was always a freelancer, and would have periods of working on projects for months at a time, and then back to auditioning. When I became an instructor, I was an independent contractor, even when I was committed to 13 classes a week for 16 years. Everything that I have done has been completely organic. I am sure that being a self-starter in school has helped with this. I am not a five-year-plan type. I tend to put one foot in front of the other and to allow things to unfold. I show up, and I say yes. Occasionally I will make a big move. Like when I finally left teaching at other people's studios after after 16 years, I already had a full roster of private clients. It was at that time I got to produce my DVD, start doing speaking engagements and endorsement deals...and begin writing a book in earnest.

Who are your mentors and how have they helped you?

I will go back to my original teachers. I have found that the universe provides me with people who have come before me in the moment. I have been lucky enough to have access to some of the greatest influencers in multiple areas. When I needed guidance doing the DVD, I spoke with many many people. I had just enough help to encourage me to keep going and little enough to do it on my own. With a lot of help! Megan Murphy who is the senior editor at Good Housekeeping was so helpful. Erika Lenkert who publishes GFF Magazine helped usher me along through the writing of my best seller. Jennifer Aniston has been an ear and a huge supporter in terms of helping me to market. I have a great literary agent, Jane Dystel, who has been in the business for a lifetime, but who has the most open mind and listens to me with fresh ears. She allows me to take the lead, and at the same time, encourages me when I disappear. These are a few, but honestly the list is endless. I have had such great encouragement. A large part of my business, however, is following along.

What qualities do you most admire in people?

What skill do you wish you possessed?

I wish I had a great singing voice.

What has been your greatest work achievement?

Broadway at age 14, New York Times Best Selling Author. The original sell-out Spinning teacher for 16 years, and the community that I was able to create there. Self-producing my own DVD and then licensing it. I loved being a part of pop culture by being a recurring character on Cheers. Having 5 years where I did not work at all. Reinventing and recreating myself.

How do you find balance in your life?

I listen to my body. For me, I am not driven solely by the future and security. It makes it easier to be present moment. If my path is primarily spiritual, then there is room for different phases of life. However, certain rituals do help to slow me down to my natural rhythm. Meditation. Being near the beach. Walking. I try to slow down as much as I can and be easy on myself. Live my life and be present.

Where do you see yourself in 20 years?

Hmmm...I will be 67? Well, hopefully alive. My father passed away at age 60...so I'm gonna take a pass on projecting that far into the future. I hope I will be smiling. Doing less and being more.

The '70's. Probably because it reminds me of childhood. But it was such a time of exploration and discovery in the art of acting and music....the style and it was before things were packaged and commercialized. I am sure that it's my childhood memories, but Led Zeppelin, Saturday Night Live, Gloria Steinem, Playboy, Jack Nicholson....it was all HAPPENING in the '70's.

I have to flip a coin on this. Depends on the day. 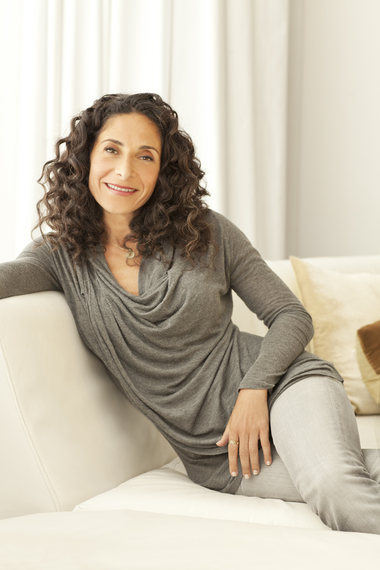