"This is the West, sir. When the legend becomes fact...print the legend"

The Hollywoodization of Silicon Valley startup stories "prints legends," but for most startups those stories are pure fiction. They don't tell the awful, painful, and exhausting job it is to build a business.

The two guests on today's Entrepreneurs are Everywhere radio show tell it like it really is to navigate the chaos of a startup.

Joining me in SiriusXM's studio in New York were: 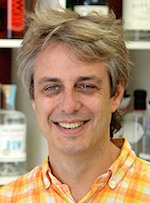 Listen to the full interviews with Drew and Craig by downloading them from SoundCloud here and here.

Drew Silverstein is an award-winning composer, producer, and conductor for film, television, records, video games, and an MBA student at Columbia Business School.

He created Amper Music to change the way music is composed and created for video content, but it is not his first startup.

At his first venture, Henry O'Bryan, LLC, Drew quickly learned that startup life is nothing like the movies.
Drew: It wasn't a successful startup. We didn't sell it. We didn't IPO it. It went really well for a while ... and then we closed it down breaking about even. I think that removed the sheen of startup glory (for me).

Drew: Exactly. ... Just like the movies. I should've known (that wasn't true) because I'm in Hollywood, and we know what really happens behind the scenes. ...

... In a startup you need to be an expert in what you're doing - not just doing something you have a cool idea for. You better know the problem in and out, and if you can have lived it, even better.

It's important to have a fantastic team around you. We had a great team, but I wasn't the best, most valuable team member I could've been for the project.

... I learned that in a startup things don't always go well. In fact, usually they're not going well.

Craig Kanarick's career has integrated digital technology, design and strategy. In 1995, he co-founded the digital services firm, Razorfish and grew it from a two-man startup to more than $250 million and 2,200 employees. Craig also co-founded Razorfish Studios, a media and entertainment company, producing books, films, TV shows, albums and websites.

After leaving Razorfish in 2001, Craig spent a year immersed in food, including a stint as a prep cook at Babbo, Mario Batali's flagship restaurant. At the Rockwell Group, the architecture and design firm, he co-founded Studio Red and the Lab, an incubator for integrating digital technology into physical spaces. He founded Mouth in 2012.

At Razorfish, Craig's lack of startup experience showed:
We expanded too quickly, and in particular we merged with a company that was a complete culture clash with the rest of the company. We were creative designers and front-end developers in a highly creative environment, and we merged with a Boston-based back-end technology company who was working in Fortran, and old school.

(In hindsight, the culture) mattered a huge amount. After the merger people were asking, "Why am I working for these people now? I don't get them. I don't understand them. I don't like this place ... "

... I'd not even managed myself. I'd never been a boss of anybody before Razorfish ... so we really had to learn everything on the fly.

If you can't hear the clip, click here.
--
Drew shared where the idea for Amper came from:
We recognized that what we were doing in terms of writing music ... could be distilled.
Not distilling the high artistic level but at its core we could distill what we were doing into a process that could be replicated by a computer.

... Algorithmic computer music has been around for decades but we think we've figured out a novel way to approach the solution based on our experiences as film composers.

At the same time we had clients coming to us and saying, "We need this. Not every project we do is this high-budget triple A blockbuster. With these other projects, we don't like the (music) solution that we have. Can you do it for us instead?"

We ... put one and one together and said, "If we can offer you a solution that provides the product that you want, the music that you want, that's driven algorithmically, is this something that you'd be interested in?"

Overwhelmingly the response was like, "Yes. Yes. Can we have it yesterday. Why don't you have it already?"

And that's ... when we said, "All right. We don't know if we can do it but it sounds like we should explore the opportunity."

Customer input shaped Amper's product:
One of the things that was really important to us was using Lean methodology. We ... ended up doing it before we knew what Lean was...

... Before we had a clue what that was, (we had customer input). ...We said at its core, what are our assumptions, how do we validate them, and then how do we change paths or iterate based on that as quickly as possible?

... outside the building, you learn how many nuances there are to what you're doing. It's not one big umbrella of a problem; there are so many different elements to it. ... We learned it's not just music for media it's, well, here's one use case, here's another use case, who is doing it and why? You you need to boil this down to the most pinpoint thing you're going to do, be successful at that, and then grow.

I think unless you're asking people and learning from people and asking to meet more people and figuring out where this is going ... it will take a lot more time to figure that thing out than doing it the lean way.

Drew wishes there was a playbook for how to be a startup CEO at Amper:
There is a lot of information on, "How do you raise money?" (but) there's a lack of information, or certainly less thereof, in terms of what do you do after you raise money? How do you run a business and how do you be the person you need to be to everyone you're interacting with? How do you deal well with investors, with customers, with employees, with your colleagues?

... you are responsible now. People have given you a lot of money and said, "Do this thing." ...fortunately, we have a great team of advisors, who I think are invaluable because, just like anything, it's an apprenticeship.

To hear the clip, click here.
--
Craig explained how fund-raising has changed since doing his first startup:
It's completely different. ... There was no angel investing in the days of Razorfish. It was all strategic partnerships leading to IPOs. That's just not the path right now. The whole idea of crowdsourcing and crowd-funding and doing angel investing, and then a series A with VCs, that path didn't exist in the late '90s at all.

(Today) there's more access to capital, and it's a pro-entrepreneur world. It's cool to be an entrepreneur.

Here's why Craig started up again:
The first thing that I tell people is to make sure that you love what you're doing, because you're going to have to work an enormous number of hours doing it.

You're going to spend a huge percentage of your time doing this, you've got to love what you do, you have to be good at it, and you have to be honest about both of those two things.
Because you can fool yourself into thinking it's worth it because I'm going to get paid at the end. When the Internet was on fire people said, "How do I make some money off this Internet thing?" If you're asking that question, you're in the wrong place.

Steve: You know my line is, "Entrepreneurship, it's not a job, it's a calling. It's the world worst job, but it's the world's best calling."

Craig: It is. It's the reason I'm doing it again.

Listen to my full interviews with Drew and Craig by downloading them from SoundCloud here and here. (And download any of the past shows here.)

Next on Entrepreneurs are Everywhere: Nigel and Vaugn Caldon, co-founders of BallStar and Kerry Frank, founder of Comply365.