Earlier this year I was invited to speak at Wharton Business School at an event, Rebuilding America - Path of Entrepreneurship. Check out the full talk here.

This article is an extended version of a quote from my talk above "Entrepreneur Do Not Have Dream Jobs." Read the article to find out what I mean.

Summer of 1999 in India, one of the hot Sundays in May, my father asked me if I would like to go for a long scooter ride (it's not as convenient as a car ride nor as exciting as a motorbike ride). It was work related and father had to collect payments from a client. And scooter was all we had at that time. The temperature was soaring in 90s and I was always this hyper active kid who would want to go out for anything and everything over choosing to stay at home and also it was a perfect reason for me to wear my colorful teenage sunglasses.

So roughly after 30 miles, we reach a factory, where my father had to collect payments from a client. As we walk inside this giant factory that processes textile chemical reagents, I was already excited for this impromptu field trip. This is the first time in my life I was seeing a real factory with hundreds of workers on floor getting their hands dirty and working with machinery. I liked the idea of seeing that gargantuan structure with so many people in it and all owned by one person and his vision. We then met a guy, whom my father shook hands with. He was wearing a sweaty white undershirt and looked like an important man in that place. He instructed us to go in and meet this other guy, who had kept an envelope ready for my father to collect. So we go inside this air-conditioned office for barely 2 minutes, my dad shakes hands with this guy, the money guy- as I called him back then, and we go out.

After we reached home, my dad asked me if I enjoyed the ride. Yes I did and I told him that someday I would want to start my own company, where hundreds and thousands of people are working for me and we would make something. Then, my father asked me if I saw the owner of the company today? I replied -Of course yes, that money guy in the air-conditioned office and I totally want to be that guy. So my father told me, "Dhairya, if you want to ever start your own business and run it that big, you won't be sitting in an air-conditioned office." I was confused by what he meant. Then he clarified - the guy sitting outside in that sweaty white undershirt was the owner and the guy inside in the AC office was his employee - a bookkeeper accountant. If you want to be an entrepreneur, be ready to hustle and always on your feet. Basically in a nutshell, he told me that working a job is easier than creating jobs.

I thought about it all night and for years to come. 10 years later, I launched my first online e-commerce company in Mumbai, India in 2009. I found myself again on a bike ride, this time with my co-founder and friend and we were going to a college to sell our website subscriptions. We did this every day for days, weeks and months. When I first had the idea of starting that online company, I was thinking I will be the next big Google and I will soon drop out of my college and all. However, after I started the company, while still being in second year of my undergraduate college, I found myself running here and there, while all my friends in college were enjoying their movie nights, drinking parties and doing a lot of other things, that I didn't even know existed because I was busy running a company. When I was about to finish my undergraduate college in 2010, I did not go for any interview rounds for job placement on campus. Someone asked me what my dream job was and I realized I do not have one. I never want a job in my life. I am an entrepreneur and will always be one. I was intoxicated by my own dreams and my parents and everyone around were scared with these ideas.

My first venture shut down in a little less than three years and all the co-founders took different career pathways while still being the best of friends. I chose to come to USA in 2010 to join a grad school. In 2012, I attained my Masters of Science in Biomedical Engineering, which was an ultimate dream for my parents, considering my father never went to a college and my mother is a teacher in public school but could not continue studying beyond Bachelors because of the financial situation at home and other family responsibilities. Due to lack of college education, my father wouldn't get any real good jobs. Being a small business owner was the only choice my father had, if he were to make good money and send his son to USA for grad school and he did exactly that. But at the cost of, living on the edge all the time, no job security or job benefits and the extreme pressure of markets crumbling down overnight. But he was happy that his son doesn't have to take that route because he has a grad school degree and he will definitely find a job and enjoy more stability.

He was right. So after graduation, I took up a job in Healthcare IT in New Jersey. July 2nd 2012 was my first day at the job. I worked 9-5 pm. I realized I could not stay any longer. July 2nd was also the last day of my first job. I quit. Yes I did, on the same day. 5.30 pm. I was waiting for sunrise in India, so I can call my parents and let them down by giving them "THE NEWS." Just when they thought, their son graduating with a Masters was the biggest news of 2012 they were in for a surprise.

I called my parents and told them; I have decided to not go for the job but walk the path of entrepreneurship. I want to be a serious entrepreneur and not just fancy about making the next Google. I want to follow my dreams - chase them, make them, build them and turn them into reality. 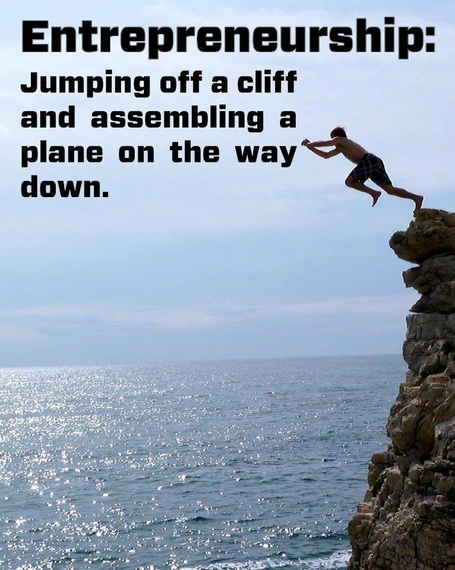 Jumping off a place and assembling a plane on the way down.
Quote Reference- Reid Hoffman, Co-Founder of LinkedIn

And I told my father that I know thi is risky and I may not enjoy an air-conditioned 9-5 pm office job stability and benefits. I do not have any dream job that can make me happy and content. In fact for an entrepreneur like me, it makes no sense when those two words come together DREAMJOB. As an entrepreneur, you either have a dream or a job. I chose the dream. It's been two years; I am now the Founder, CEO for Ycenter - a social enterprise that solves problems in healthcare and education for communities in Africa and India. Basically I get my hands dirty working with communities globally on the ground in the sun.

See my story of WHY, WHAT and HOW I started Ycenter from the Ignite Good's 2013 Ignition Philly Campfire event in association with The Huffington Post.

I believe Entrepreneurship has always been a part of me, it defines me, my journey and my story. And July 3rd 2014 is special because it's been exactly two years since that phone call to my parents in India and telling them about my decision to quit my job on first day and follow this path. I live in student style apartments and survive on Ramon noodles. I do not have health insurance for last 2 years. But I have a Dream and I like solving problems and that's what entrepreneurship is all about.