There are plenty of symposia for the new generation of entrepreneurs and start up kids taking the country by storm. Most focus on the key positive steps to success and winning conditions needed to ensure your business makes it through its first year with the right trajectory.

There is one, however, called Fuckup Nights, that sticks out like a sore thumb. Rather than focus on the positive, seemingly unobtainable success stories, this one-of-a-kind event focuses on the not to be discussed in public big mistakes made by entrepreneurs. The proverbial fuck ups that unwittingly, have guided impressive start up winners.

But come on, isn't this taboo? Shouldn't we focus only on the positive side of the business start up? Most stories in magazines about start ups seem to always focus on the bravado of success stories. The winners and the top performers. As a result the culture surrounding this phenomenon is for the most past very positive and optimistic. Reading the literature about starting a company or listening to shows such as Start Up, a popular podcast by Gimlet Media about the steps needed to start a business, one would assume that with the right idea, partners and support network, it can happen with at the most a few sweaty nights. But this event focuses solely on the negative in order to teach the positive. One of the Fuckup masterminds who brought the event to New York City is Steffan Bankier. I recently asked him about the event and why Fucking Up is, for start up whiz kids, a most aspirational and inspirational must see event. 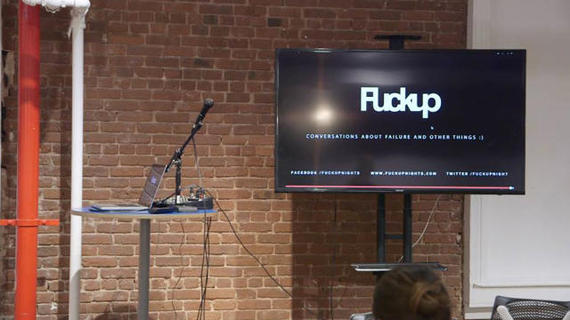 Scott Goodson: What is Fuckup Nights all about ?

Steffan Bankier: It's about making it ok to talk about mistakes. No successful person has gotten to where they are without running into major road blocks. Having them talk about it openly on stage helps remove the shame and embrace that it's ok, and almost beneficial in some cases, to fuck up.

SG: Why did you decide to get involved?

SB: It seemed like a good way to meet cool people and try to do something different. I've been to a lot of events, and Meetups, etc. in the city where everyone is "killing it," and "doing really well." I do it. We all do. But if you were killing it, why has no one heard of you and what are you doing at a Meetup at 5:30 on a Thursday? What I liked about Fuckup Nights is that it's meant to encourage genuine conversation.

SG: Why is it different from other symposiums inspiring entrepreneurs?

SB: To be honest, it's still not always different enough. We really want this to stand out, and no matter what anyone says, it's really hard to get people to genuinely open up. That being said, our speakers have been fantastic and the events are fun and always very interesting People are really into them. We're getting there.

SG: What do attendees take away by attending?

SB: That failure is part of any venture. Whether it be a business, an art project, whatever, it's all about failing intelligently, and learning from it. Personally, I've found that you truly fuck up when you repeat the same mistakes over and over. Again, that can be really hard to avoid. They also get to meet really successful, influential people in a more laid back setting, which is always awesome.

SG: I had the pleasure of speaking about starting the ad agency StrawberryFrog 16 years ago - and my Fuck Up - at your landmark launch event. It certainly made me think about things very differently. What's in store now? Next?

SB: Right now, we're preparing for an upcoming event at Techstars on Wednesday. Fuckup Nights is a global organization, so we're trying to scale NYC Fuckup Nights as much as possible, while still keeping it intimate.

Scott Goodson is founder of ad agency StrawberryFrog and author of bestseller "Uprising: How to build a brand and change the world by sparking cultural movements."