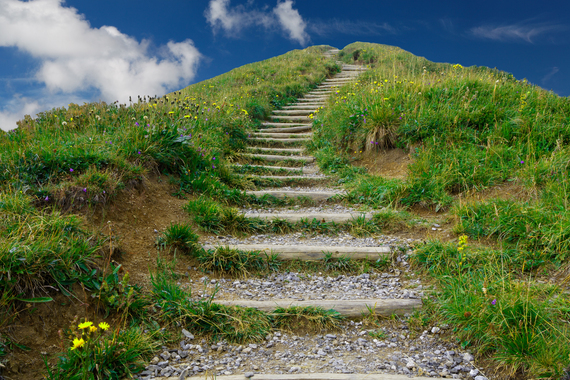 I started my journey as an entrepreneur because I wanted to make a difference, to change the rules of the game and because I didn't want anyone telling me what to do. I didn't understand that what I really embarked on was a spiritual journey.

Now, 15 years after starting my first company in Sweden, I see the common thread in all the businesses and organizations that I've started, been part of building or rebooted; it was never about what company or organization I was building per se, it was about being on a spiritual journey. This journey took me from Sweden, to San Francisco, to Los Angeles, and soon to Seattle. While it has intertwined awakenings and spiritual experiences with Venture Capital-funded Internet startups and non-profits to the company I'm building today, I always saw those two paths as separate.

THE ILLUSION OF SEPARATENESS

Yet it is precisely this illusion of separation that we need to dispel. The entrepreneurial and the spiritual path are made of the same intangible substance, namely hope and a belief in something that doesn't exist (yet you believe, deep down in your gut and heart). This existential fabric is woven with wavering and doubts, a belief in that what we are creating can make the world a bit better, and a rejection of the status quo. Further down the road when we've tasted both the sweetness of success, and the bitter tonic of failure, or when our company just is languishing, which sometimes is the worst, the only thing that sustains us is either madness or faith.

All of the above are the ingredients of a good Hero's Journey, with tons of dragons to slay along the path, and even more pebbles that make you trip and fall on your face, interjected with moments of bliss by the campfires.

FORGETTING & GETTING STRESSED OUT

For most of us, however, somewhere along the trail we forget that we are on this big adventure and we get exhausted. Exhausted at always having to be in charge. Exhausted at always having to care about if the funding has come through for this round. Tearing our hair out over making - or not making - payroll, and having our stomachs tied in knots when trying to please investors and board members. Without us even noticing, the business all too easily turns into a dictator. From having been driven by our ideals, we are as much a cog in the machinery as anyone else - just with more responsibility.

The salvation comes at the juncture when we surrender our fighting, and either sell the company, leave and let the company fail, or find a path that is more sustainable. The first and second option might be temporary - and sometimes necessary - respites, but sooner or later, our drives take us to the next adventure.

THE THIRD WAY - CONNECTING THE ENTREPRENEURIAL & THE SPIRITUAL PATH

My belief is in the power of the third way, where we stay checked in, and connect the entrepreneurial and the spiritual path. The third way is a way of living and working that is fueled by a deeper drive of sacredness. The third way is when we stop forcing agendas, and instead let ourselves be infused by a nourishing and authentic way of doing business, living and leading with heart and purpose. The third way is based on oxytocin instead of adrenaline, love instead of fear.

At the age of five, as a Swedish citizen, I wanted to be the US President. At the age of 11, I wanted to live on a mountaintop and learn how to levitate in Tibet. While slightly odd choices of a child, perhaps, throughout my life, both the desire to make a difference, especially as an entrepreneur, and to connect to the deeper mystery have always been present. While it's wonderful to have spiritual awakenings at ashrams, retreats, or ceremonies, the challenge is to bring those awakenings back to the ordinary world and make something extraordinary and sacred of it - and then spread that sacredness. I've chosen to stay in the business world because this is where I believe the real transformation must happen. Which is what I believe will eventually contribute to a much better world.

Lotta Alsén, MSc International Economics is the Founder and CEO of Quickenings Leadership Institute based in Santa Monica, CA, where she offers programs and coaching for entrepreneurs, CEOs and change-makers who want to learn how to live, lead and build businesses according to the third way. Sign up for a free 30-minute consultation or sign up for her newsletter, which is the start of the community she's building around the third way.

Lotta Alsén was the co-founder and CEO of an online content platform for women that contained an early mobile game together with a web-based cartoon that was the first in the world to migrate to television. She is also the founder of CORE, a personal leadership program and method for empowering more women to become entrepreneurs that was funded by the EU and the Swedish Innovation Agency. It has today been around for ten years and trained thousands of more integrated women entrepreneurs. She has also been the President of the Swedish-American Chamber of Commerce in Los Angeles, which she took from near closure to a thriving chamber with a focus on the creative industries.