One surefire way to increase your chances of entrepreneurial success is to be a big fish in a small pond. Essentially, it's better to enter a small market with less competition than it is to enter a large market with many incumbent players.

This strategy mainly refers to cities. You have a higher chance of success in a smaller city than a larger one. However, this strategy can also apply to the Internet. The Internet is the largest market with the most competition. Therefore, you need to carve out a niche for yourself on the Internet with less competition--at least to start.

This strategy not only works well for business, but also for highly skilled professionals. Doctors and lawyers in smaller cities often earn higher salaries and gain greater recognition than their counterparts in larger cities. With fewer options to the population in small cities, highly skilled professionals can act as monopolists. I remember having a conversation with a very wealthy lawyer in Las Vegas. He mentioned that it was much easier for him to find success in Las Vegas than it was for him to have success in Washington DC where lawyers are a dime a dozen.

For example, it was a blessing for me to attend inner-city public schools in Las Vegas, which are known for having practically the worst academics in the nation with a 40% dropout rate. It was much easier for me to become my high school valedictorian. It was much easier to win scholarships that were only open to Nevada students from companies such as Coca-Cola, Toyota, and McDonald's. It was much easier to get into great colleges such as Brown, Northwestern, and Johns Hopkins (because colleges need students from every geographic region). I'm not sure I would have had the same levels of academic success had I attended an ultra- competitive high school in San Jose.

When I was first starting Prep Expert SAT & ACT Preparation, I was a senior in college at USC. My plan was to advertise the classes on my website during the spring and teach classes during the summer, before I headed to medical school. I had to decide where I wanted to start my Prep Expert classes.

I thought it made perfect sense to start my classes in Los Angeles. Because Los Angeles is a huge market with a lot of wealth, I just had to convince a dozen parents to enroll in my SAT prep classes. Easy right? Wrong.

I tried everything to launch Prep Expert. I paid the deposit to rent a beautiful, modern classroom near Beverly Hills to advertise on our website. I e-mailed every college counselor in the Los Angeles area about our classes. I visited over 50 top high schools in the Los Angeles area. I did web and print advertising. But I could not get one student enrolled in our classes.

Right before spring break, I had a student from my high school in Las Vegas e-mail me. He said that he wanted to take my classes, and was hoping that I'd start them in Las Vegas. No one but me knew at the time that I had zero students in Los Angeles and one potential student in Las Vegas. So I pivoted. I cancelled my deposit on the Los Angeles classroom and made a new deposit on a Las Vegas classroom.

Prep Expert was now going to launch in Las Vegas, rather than Los Angeles. I told the Las Vegas student, and he enrolled. I now had my first student in Las Vegas without doing any marketing there.

The difference between starting my business in Las Vegas versus Los Angeles was night and day. In Los Angeles, I didn't have one student enroll for months. In Las Vegas, I had students enroll weekly. By the time June came around for me to teach the first set of Prep Expert SAT classes, I had not one, but two classes that were almost completely full in Las Vegas.

I'm fairly certain that I didn't succeed in Los Angeles because there is so much competition there for SAT prep. Test prep companies have been there for dozens of years with deep customer bases. So it was very hard for a solo entrepreneur like myself to enter the market. But Las Vegas did not have many test prep options. So it was much easier to start there. We are now the largest test prep provider in Las Vegas. Because we started in a small market, we were then able to expand to larger markets. I recently closed a deal with Mark Cuban on ABC's Shark Tank for an investment in Prep Expert and we now run classes online and in 20 major cities, including Los Angeles. 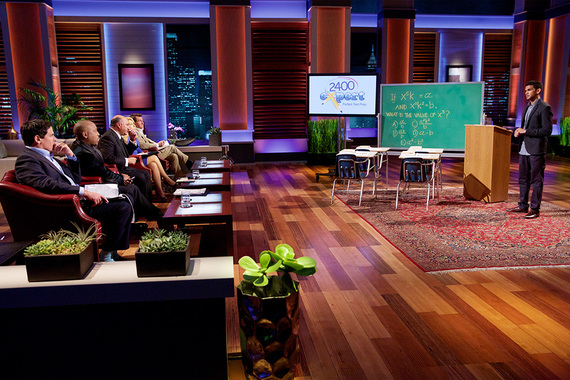 For entrepreneurs, consider setting up shop in a small city, not a large one. Your business will likely do much better in an environment where you are not surrounded by cutthroat competition. A bigger market does not always equal greater revenue.

Believing that it's better to enter a larger market because there are more dollars is like attempting to win the lottery. Your eyes are fixed on the big prize. This is likely why investors hate when entrepreneurs describe how big their market is (e.g., $100 billion) and then say that they only need to capture 1% of that. The bigger the market, the harder it is to capture any market share at all.

Moral of the story? Be a big fish in a small pond.

Shaan Patel is the founder of Prep Expert SAT & ACT Preparation, a #1 bestselling author, an MD/MBA student at Yale and USC, and winner of an investment deal with billionaire Mark Cuban on ABC's Shark Tank. He raised his own SAT score from average to perfect and created SAT & ACT prep classes that operate in 20 cities and online at prepexpert.com