A YEAR HAS PASSED SINCE THAT TERRIBLE MORNING

Tomorrow we are to go to Temple to honor the one year passing of my son's death. One year to the day, Feb. 28. But tonight we go to an awesome restaurant overlooking Patong Beach. We see a massive luxury liner anchored off the coast and we watch the sun go down enjoying the once again spectacular dishes Tarn has ordered for us. Just as the final plate of whole roasted fish encrusted in roast garlic arrives, Christian decides he wants to climb on the table. Trying to restrain him causes a complete melt down and Tarn and A both rush in to contain the situation.
I think, "Ahhh, this is where it is nice to be the grandmother...watching from afar." While tears and wails commence I enjoy my coconut water and am grateful to be a part of even this minor intrusion.
The next morning we awake to get ready for Temple. We must first buy flowers for the offering table. I have brought 2 pictures of Josh from home. One large framed picture of him wearing his ever present sunglasses and another smaller one that I love. I had asked A if she had a picture of Josh she might let us use but she said she did not. I find this odd, as she tells me that she always shows Christian the picture she has of Josh, telling Christian, "This is your daddy". Just one more inconsistency on the scorecard I keep in my head.
Rick wrote in our journal:
"About a 15 minute ride on a road I now find familiar, we arrived at the temple site. The four buildings I saw were very ornate-brilliant red and gold surrounding the white exterior. The rooflines bow inward from the top, then out again at the end. A typical Thai style I see frequently. Three monks dressed in saffron robes sat on the raised platform. Food was presented to them as well as a money offering. Off to one side a small table was set up for Josh's pictures and some other ceremonial items. Before the ceremony, Christian explored every nook and cranny. Tarn bought him a miniature version of a shirt his dad wore; white linen, button front, collarless, rolled up long sleeves. Very handsome little boy!
Oh! Just before entering the temple we were brought into a smaller building where an elderly monk, apparently quite important, tied thin white strings to our wrists for good luck. Tarn said we were not to interact with the Monk but he reached out to shake my hand and I was unsure of what to do. Tarn assured me it was OK to return the handshake.
After the service we went into another building to have a lunch prepared by the women who work there." 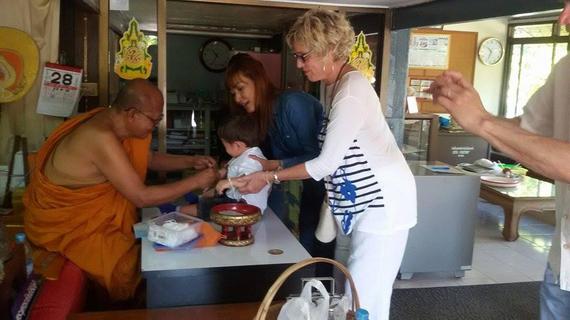 When the service was over I asked the girls if we could go by the accident site. I wanted to leave the lovely bouquet of flowers that Tarn and Ant had brought me. The first time we were at the accident site I saw Josh's sandals lying by the road. I wanted to pick them up and take them but Tarn told me they must be left there, for Josh to ascend into heaven unimpeded. I wondered if they were still there. After some driving up and down the winding highway we came to a spot that both Tarn and Ant said was the crash site. I left the giant pink bouquet in a clearing of dense foliage, said a prayer for my son and tried to cross the busy winding road back to the car.
We returned to the hotel to rest and get ready for the Celebration of Josh's Life at Xana Resort that evening.
After a 20 minute taxi ride we arrive at Xana. Oh, it is exquisite! Many luxurious cabanas on the beach, with a larger white building in the back round with a pool and disco. We saw immediately Add with banners and kites and lanterns. She is wonderful! And it is she who has put this evening together with Eka and Pierre, of course. As we got closer to the beach a lone musician with a saxophone could be seen playing against the setting sun as a back drop. I was stunned. Rick took a picture and it remains one of our favorite memories of this trip. 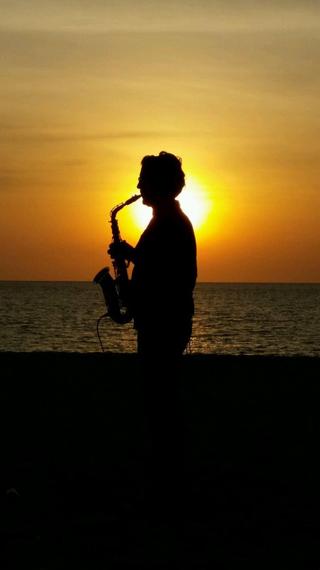 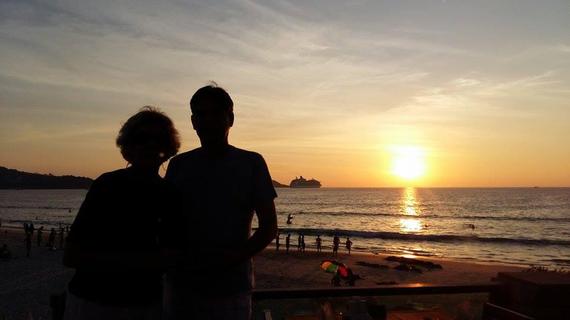 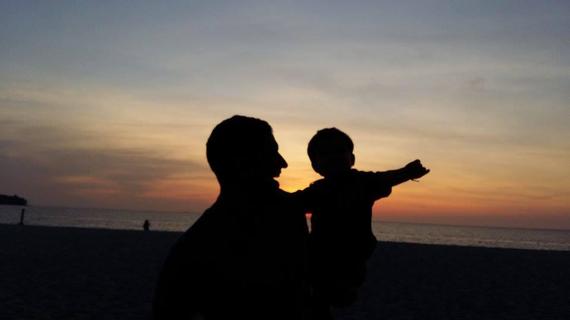 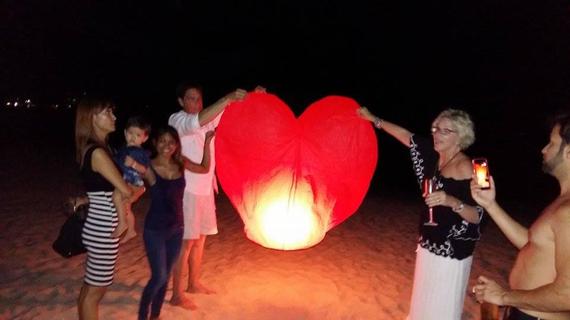 So many of Josh's friends are there; Sharon, Peter, their friend Charlie, James and his three adorable children, Sean who Josh mentored, and more.
It is here that I told A I wanted to talk to her, just she and I. We walked down the beach and came to a place to sit. I told her how grateful I was to her for letting us take Christian back home with us, what an incredible sacrifice it was for her, and that I would always love her and care about her. It was then that she broke down and cried and told me of her sadness, her family turning against her, how she would miss Christian, and how she loved Mia and me. I felt an incredible closeness to her. I still don't believe her completely, but the mother in me wanted to hold her tight and tell her she was loved. And I did.
After a while we heard others calling for us and it was time to send up the lanterns in Josh's name. It was a joyous event and I felt my son's spirit, just as I had from the minute we landed in Phuket. I believe he is there still. I believe that the person who passes away goes to the place he loved the most, and truly that place for Joshua is Phuket, Thailand.

Before we left to go back to the hotel I had an envelope to give A. Money. Although A had not asked for money, Tarn said it was expected. I withdrew $5,000.00 but was unable to withdraw any more on my AmEx card. I had intended to give her $8,000.00US. I told her as soon as I could I would give her more. She accepted the envelope without looking in it and thanked me with a hug.