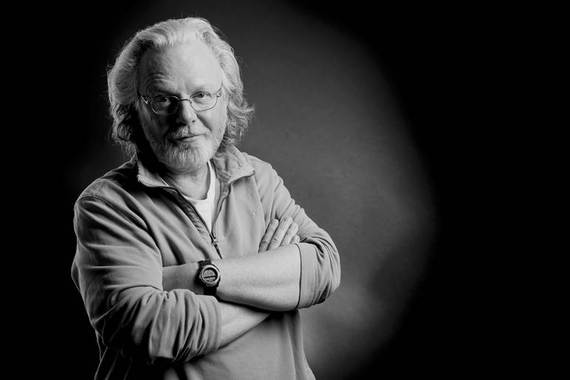 Peter May is a Scottish television screenwriter and novelist. He has received writing awards in Europe and America. The Blackhouse won the U.S. Barry Award Crime Novel of the Year, as well as the CEZAM prix litteraire, the national literature award in France. The Lewis Man trilogy also won a prestigious French literary award.

In 2014, Entry Island won both the Deanston Scottish Crime Novel of the Year, and the UK's ITV Crime Thriller Best Read of the Year Award.

Peter May is the creator of three major television series and presided over two of the three highest rated series in the UK, before leaving television to concentrate on writing novels.

Entry Island follows detective Sime Mackenzie who is sent from Montreal to investigate a murder on remote Entry Island, 850 miles from the Canadian mainland. He is a troubled man beset by insomnia and regrets about the course his life has taken.

What seemed like an open-and-shut case takes on a strange and disturbing quality when Mackenzie meets the prime suspect: the wife of the dead man. He believes he knows her, even though he's sure they have never met. But as the novel proceeds, nothing is what it seems.

The book occurs along two different story lines merging seamlessly: one involving Sime's nocturnal dreams of a 19th Century Scottish past; and the 21st Century mystery occurring on an island off the coast of Canada.

As a screenwriter, you're not actually creating the images; you're laying the foundation for them. I always write visually--even as a script writer, there was a lot of descriptive material in my screenplays to serve as a guide for the director. There's always been a sense of the visual in my writing. It was natural, when I moved into writing books full-time, that I took that sense of the visual with me. While I don't have a director and film crew to create the images for the screen, I try to recreate those places and settings for the readers.

Entry Island merges a historical quest with 21st century police work. What gave you the idea?
I primarily wanted to write about the clearances in Scottish history. It was the main spring for writing the story. Books about that shameful period tend to be historical, factual documents. I wanted to write a drama that would bring to life the brutality of that dreadful period. But, I'm a contemporary crime novelist, and don't write historical fiction; and I know my publisher would be unhappy with me. So, I endeavored to come up with a way in which I could link a contemporary crime story to the historical fiction I wanted to tell. The challenge here was that the two stories take place 150 years apart. Basically, in order to tell the historical story, I had to weave in a contemporary crime story.

You mentioned the clearances as part of Entry Island. Tell us about what happened during that period.
It was a shameful period in Scottish history, lasting about 100 years. It followed the 1745 defeat of the Jacobites, the supporters of the deposed King James. He had been part of the Stuart lineage, which had come from Scotland, and had assumed the British throne.

The Jacobites formed an army to try to win back the throne. In 1746, they were massacred by the forces of Edward the Butcher. The Jacobites were largely Gaelic-speaking farmers who fought at the behest of the clan chieftains. After their defeat, the British government outlawed virtually everything having to do with their culture: the wearing of the kilt, playing bagpipes. Gaelic speakers were hunted down throughout Scotland and often slaughtered. Trying to ensure there would never be another rebellion, the government displaced most landowners in Scotland. The new owners decided sheep, not people, were profitable. They cleared the people from the land. For more than 100 years, they loaded tens of thousands of people onto boats with nothing more than the clothes on their backs; and forced them to go to the New World.

It was all in pursuit of profit, and had the blessings of the British government. On a contemporary basis, it would be called ethnic cleansing.

The Lewis trilogy and Entry Island depict men haunted by their pasts or that of their families. What is your view of one's personal past?
This theme recurs in much of my work: the way the past shapes our present and our future. I think most of us live with some degree of regret about things we did or didn't do; about things we said, or didn't say. We're shaped by these things. I always say we are simply the sum total of our memories. Without our memories, we're blank sheets.

That theme has always fascinated me.

Sime Mackenzie is a fascinating character. What qualities do you feel make for a good protagonist?
I think each story demands different qualities in a protagonist.

In this story, I needed a troubled and haunted man, not just by his own immediate past, but by his ancestral one, about which to some extent, he'd been in denial.

Each story needs a character to bring it to life. What are the qualities in a character that will demonstrate the points you want to stress in the story? No character is built in isolation. It must be created in the context of the story you're telling.

Throughout Entry Island, I was fascinated by the psychological insights in the characters' perceptions of each other.
That's really just about observing people. I think it's a quality any good writer should have: the ability to observe, penetrate and record the behavior taking place between human beings.

A psychologist friend always talks about the micro-signs she sees in people, small things that betray their character and demonstrate subtly how they feel about the person with whom they're interacting.

Writers have to do that, as well. You know, at the end of the day, there's nothing that can replace experience. I'm getting on a bit in years. I've seen, heard, and done a lot, and I think I bring experience into play when writing. Someone said years ago, writers don't really begin to hit their stride until they're in their 40s. Before then, you don't really know or understand what's going on around you. Only beyond a certain point in life can you interpret these things and use them in your writing.

I like the old Chinese saying, 'Old ginger is the best.'

What has surprised you about the writing life?
I've written all my life, as a screenwriter and a novelist. I worked in television for years and earned good money; but it wasn't what I wanted to do. I wanted to write novels. When I gave up television to focus on writing books, I knew it would be difficult to make a living. Very few writers are fortunate enough to make a living.

What's surprised me most of all is that I've survived. (Laughter). I've come through the bad times when we walked for two miles to get potatoes at two pennies a pound cheaper. Now, we're comfortable. That's a revelation to me.

What do you love most about the writing life?
I love stopping. I love putting down the pen at the end of the day. I have a love-hate relationship with writing. I hate it most of the time, but when I'm actually doing it, I get engrossed and transported by it. I forget the time, and the day passes. Then, I find it very hard to start again the next day.

Do you procrastinate?
No. As a journalist, I learned to work fast and meet deadlines. I work very quickly and with strict, self-imposed deadlines. I spend 2 to 4 months developing and researching a book. Then I write a very detailed synopsis which can be up to 25,000 words long. Armed with that, I write the book. I get up at 6:00 every morning and write 3,000 words a day, and finish the first draft in about 7 weeks.

You're hosting a dinner party and can invite any five people, living or dead, from any walk of life. Who would they be?
I would have to have some of my favorite writers there.

I would definitely like to have Ernest Hemingway at my dinner party, if only as a drinking companion. (Laughter). Dorothy Parker would bring some nice acerbic humor to the table. My favorite writer is Graham Greene, a tormented man but known to have been an extremely entertaining companion. I'd love to invite Sean Connery, a fellow Scotsman with whom I'd have a lot in common, especially our sense of humor. And just to keep us all on the straight and narrow, I'd ask the First Minister of Scotland, Nicola Sturgeon, to join us. She's a great fan of my books, and absolutely electrified the last British election campaign. She was described at one point as the most dangerous woman in Britain. She would be an excellent addition to the party.

What would you all be talking about?
I think we'd talk about wine, Spain, Scotland, Scottish independence, and probably just have some good laughs.

Congratulations on penning Entry Island, a riveting literary police procedural with a fascinating and suspenseful plot, a novel exploring how the past, haunts and informs the present.