Given the recent billion-dollar sale of Instagram, it's clear that the look of those faded, yellowed photos from the 1970s are all the rage. EPA, not usually known for having its finger on the pulse of pop culture, recently posted hundreds of its "Documerica" project photos on Flickr with just the right amount of early '70s patina. Best of all, these photos document the era right before the Clean Air and Clean Water Acts went into effect, a time full of belching factories, murky water and burning landfills. So bleak, so retro... oh EPA, you've stumbled into the hip and trendy!

It's perversely easy to wax nostalgic for the bad old days, and not just because the images are so captivating. Environmental problems were so much more apparent back then. Coal plants in the middle of cities were covering cars and homes with soot and rivers ran red with chemicals and dyes or just burst into flames. The problems were immediate and apparent. With the hard work of countless scientists, regulators and citizens horrified by such ecological disasters, massive cleanups spread across the nation. While there are certainly plenty of these big problems left -- point sources, as they're called in the eco world -- the real concerns today involve the slow, hidden, pervasive threats: the non-point sources.

For Earth Day we decided to highlight the difference between then and now with a few handpicked Documerica photos alongside a few photos of today's environmental challenges. Would an invisible "dead zone" inspire yesteryear's outrage if it were more photogenic? Would mountaintop removal generate more opponents if dynamite were blasting close to suburban towns instead of small mountain villages? Check out the photos and see for yourself. 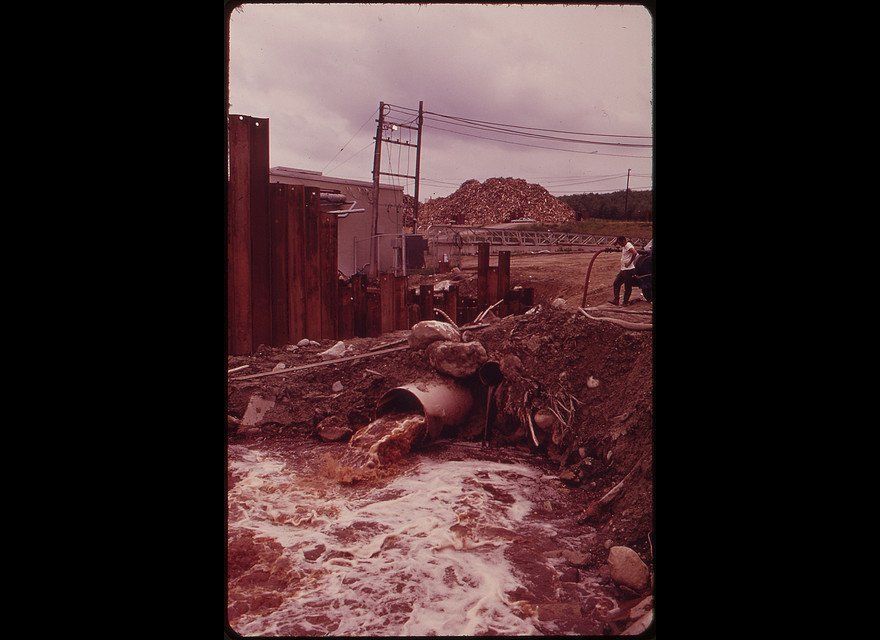 1 / 7
Man watching paper company wastewater flowing from a pipe
Polluted effluent gushes straight from the International Paper Company’s Androscoggin Mill into a Maine brook back in 1973. The Androscoggin River has seen big water quality improvements thanks to Clean Water Act regulations, but <a href="http://www.sunjournal.com/city/story/892764" target="_hplink">local activists say</a> that while the mill, now owned by Verso, may be meeting its license requirements, the amount of polluted water flowing from its discharge pipes is still too high. <em>Photo credit: <a href="http://www.flickr.com/photos/usnationalarchives/3752347344/in/set-72157621806586940" target="_hplink">U.S. National Archives</a></em>