Americans place less importance on environmental issues than they did in 1971, a year after Earth Day was established, according to a new HuffPost/YouGov poll. But the poll also finds that more Americans are taking some steps to protect the environment, such as cutting down on electricity use, eating organic foods and recycling.

For Earth Day this year, The Huffington Post and its polling partner YouGov assessed how environmental attitudes and behaviors have changed since the first Earth Day was celebrated in 1970 by repeating questions that were originally asked on two 1971 surveys.

The first survey was a telephone poll conducted by Opinion Research Corporation for Richard Nixon between May 7 and 25, 1971, that included broad questions about attitudes toward the environment and environmental spending. The second was a separate Opinion Research Corporation poll conducted using in-person interviews between July 16 and August 2, 1971, and measured actions respondents said they had recently taken to help protect the environment. Both surveys were accessed through the Roper Center's iPoll database.

Although differences in methodology between the 1971 polls and the online HuffPost/YouGov poll may account for some of the differences in results, the responses make clear that environmental issues have become less important to Americans over the past four decades.

Democrats who responded to the HuffPost/YouGov survey were the most likely group to say both that working to restore and enhance the national environment was very important and that spending to do so should be increased. But even Democrats in the new survey were less likely to express those sentiments than American adults as a whole were in 1971.

But when compared to the second 1971 survey, which assessed actions Americans were taking to help the environment, the new poll found some more positive developments. 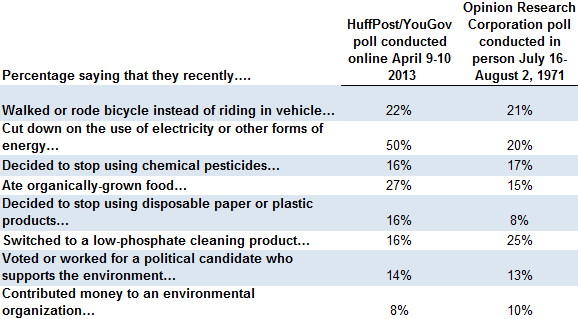 Half of Americans in 2013, compared to only a fifth in 1971, said they had cut down on electricity use, and Americans were more likely to say that they had eaten organic food in 2013 than in 1971. Although only 16 percent of Americans now say that they've stopped using disposable paper and plastic products, that's double the 8 percent who said they had done so in 1971.

Reported recycling levels also appear to have gone up, although the new survey posed the question slightly differently than the 1971 survey, asking how often respondents saved any items for recycling rather than how often they saved individual materials like newspapers or glass bottles. In 1971, 26 percent of Americans said they saved newspapers or magazines for recycling, 19 percent saved glass bottles and 11 percent saved cans. In 2013, 79 percent of Americans report saving those or other items for recycling.

An increase in recycling levels is born out by data collected by the EPA, which found that the percentage of trash recycled by Americans rose from 10 percent in 1980 to 33 percent in 2008.

Also surprising, though, was what didn't change: Just as many respondents reported walking or riding bicycles instead of taking car trips in 1971 and 2013, for example, although the surveys did not measure frequency. Similar percentages also said they had cut down on chemical pesticides in the 1971 and 2013 surveys.