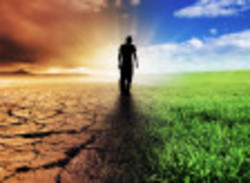 Leonardo DiCaprio has become one of Earth's biggest environmental advocates.

I recently finished watching his new film "before the flood". This landmark film looks at environmental degradation, carbon emissions, and even touches on one of the more pressing issues of our time, the environmental footprint of what we eat.

This film harrowingly shows the damage that humans have done to the global environment over the last 100 years. The images cannot be disputed. From loss of the Boreal forest in Canada for tar sands, to the loss of rainforests in the Amazon for cattle, and the loss of rain forests in Indonesia for palm oil plantations.

One of the more interesting moments in the film was when they had to travel to South America's southern tip in order to film snow scenes for his movie the Revenant.

We are approaching the tipping point they describe in the film. Where, even if we stop all carbon emissions from fossil fuels today, climate change and global warming will still progress.

I share his sadness, his anger, his worry, perhaps even his hopelessness.

For we need to acknowledge the fact that even if we stop all fossil fuel use and carbon emissions today, they are still far too many meat-eating people on the planet, with far too many more down the pipeline wanting to eat meat.

Will it be uncomfortable? Perhaps. Will it require us to give up something? Probably. But is it necessary? Most definitely. If Earth fails, we fail.

Healthy Eating for the Holidays - Leaning Towards a Plant-Based Diet