Thousands of saplings are needed to build one of Patrick Dougherty's internationally acclaimed stickwork sculptures. Hundreds of hours go into collecting the wild materials, visualizing its form and developing its structure. Dozens of hands weave the saplings in and out of each other, creating strength and beauty in the process. It's called environmental art for its use of raw, native materials, but Dougherty's stickwork projects could easily be called community art. 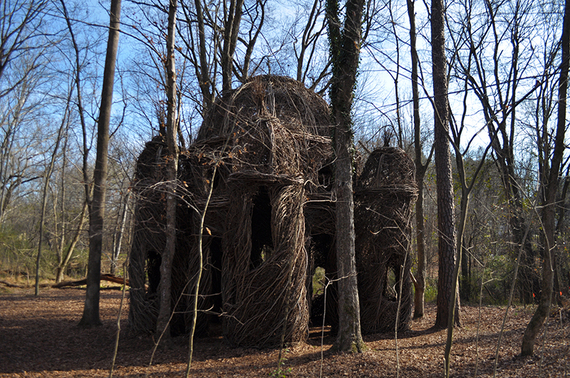 "A Sight to Behold," Dougherty's latest stickwork sculpture was recently erected in the small town of Hillsborough, N.C. This follows the November dedication of "Shindig," a series of stickwork sculptures built for the Wonder Exhibition at the Renwick Gallery in Washington, D.C.

The Hillsborough stickwork sculpture is nestled among pine and hardwood trees next to the town's paved trail along the Eno River. Dougherty designs each of his stickwork sculptures without tapping natural resources, using unwanted saplings culled by community volunteers from the undergrowth in surrounding woods. Except for some cording used to hold the saplings in place, he uses no nails or other manmade building materials in his stickwork sculptures. In Hillsborough's case, the property manager of Ayr Mount, a historic plantation house only a few miles from the stickwork site, welcomed volunteers to cut thousands of unwanted Southern sugar maple, sweetgum, and elm from the woods surrounding Ayr Mount. 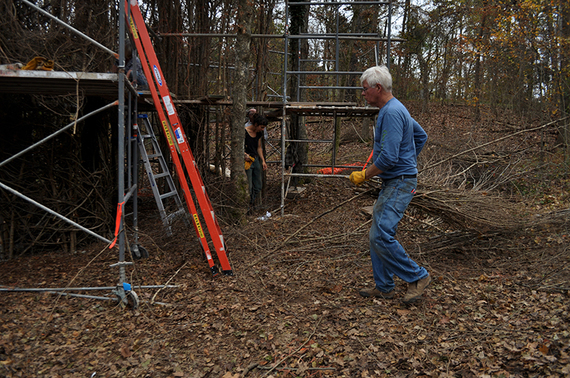 Because they are constructed entirely of natural (untreated) wood, Dougherty's stickwork sculptures have a live span of about two years, depending on the climate. Some of this stickworks have exceeded the expected lifespan because an organization has adopted them or there is a maintenance crew that inspects and refreshes saplings when they show signs of breaking down.

Dougherty, who lives in nearby Chapel Hill, was approached by the Hillsborough Arts Council to build one of his distinctive sculptures in the town, assuring Dougherty they could raise his design compensation funding from community organizations, local philanthropists and citizens. They also promised to rally enough volunteers to work with Dougherty during the three-week construction period. Work began November 2, 2015 with rotating groups of volunteers cutting saplings and hauling them to the construction site and stripping leaves and stems. By November 5 Dougherty and construction volunteers drove dozens of 21-foot saplings about 2-feet into the earth and set the foundation for the structure. The result looks drawn from a Moorish palace with five small towers surrounding a large center tower, 26 feet in circumference and 21 feet tall. Dougherty says "A Sight to Behold," was inspired by the concept of a pleasure dome, as in Coleridge's "Kubla Khan." 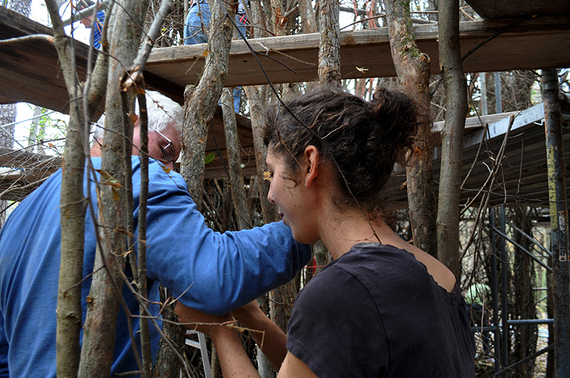 Patrick Dougherty and his assistant Elsa Hoffman check a joint in his "A Sight to Behold" stickwork sculpture in Hillsborough, N.C. Photo: Carolyn Burns Bass

Talking with Dougherty lends the impression he's part poet, part artist and part sage. He trickles references to books and authors when he speaks, a beacon to his appreciation of literature. He took his B.A. in English from the University of North Carolina in Chapel Hill. Like many young college graduates, he went on to grad school to study something that would provide a real job, earning a Master's in Healthcare Administration. All the while, he took sculpture classes. After a few years in the business world, he gave in to his artistic vision and began working with fresh saplings so plentiful in the woods surrounding Chapel Hill. Before long a style unlike anything being done in the art world emerged and he was receiving commissions to construct his remarkable stickwork sculptures in France, Denmark, Scotland, Serbia, Korea, Ireland and all over the United States.

"I'm always interested in making something that makes people want to run over and look at it," said Dougherty, standing back from the structure and watching people as they pass by. The sculpture has doors and windows; people wander in gaze about the woven walls, children lean in and out the windows, parents snap photos. It's become a landmark, and yet it still draws the impressive sigh each time one of the locals pass it on the Riverwalk.

Months before work began on the structure, the Hillsborough Arts Council sent emails to its members and associated organizations asking for volunteers. All shifts filled with enthusiastic people wanting to work with Dougherty. Not only does community involvement in construction reduce the time required for completion of the sculpture, Dougherty has found it creates ownership and pride of place in the project. Volunteer shiftwork included gathering saplings and hauling them to the build site, stripping the saplings of branches and leaves, and constructing the sculpture itself. Dougherty had a plan for the sculpture which he described to volunteers who were able to work within his guidelines with minimal training.

"My style is to let them try it out; to tell them this is what I'm doing, this is what I'd like you to work on," says Dougherty. "I give them a very brief demonstration. I have people bring large amounts of their own imagery to how it's done and what it is and what they want from it. So rather than interrupt all of that I wait a few moments and let them try it, to see if it's easy for them, or very difficult." 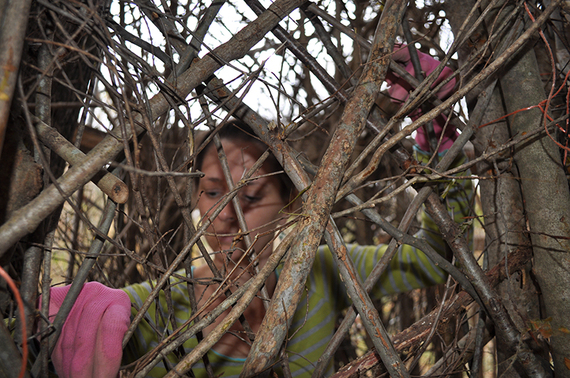 Local resident and children's book author John Claude Bemis and his wife Amy Gorely worked with the construction crew. They added sticks and limbs into the walls of the structure and framing in the windows. It wasn't always easy work says Bemis, for although the sticks were freshly cut and flexible, they often snapped when being bent to follow the shape of a window. Still, Bemis and Gorely enjoyed their experience working on the project and with Dougherty himself.

"Pat and his assistant Elsa were delightful and very relaxed," says Bemis. "They gave guidance and gladly answered questions, but they gave the crew a lot of leeway to have fun and be creative with the process. Pat was the complete opposite of the temperamental artist stereotype. He had his vision for what the structure should become, but he allowed it to be something that belonged to all of us who helped."

Volunteers contributed hundreds of combined hours in construction, yet Dougherty and his assistant, Elsa Hoffman, go over every single inch of the structure. He was often seen climbing about the structure checking joints, weaving twigs, and filling gaps. 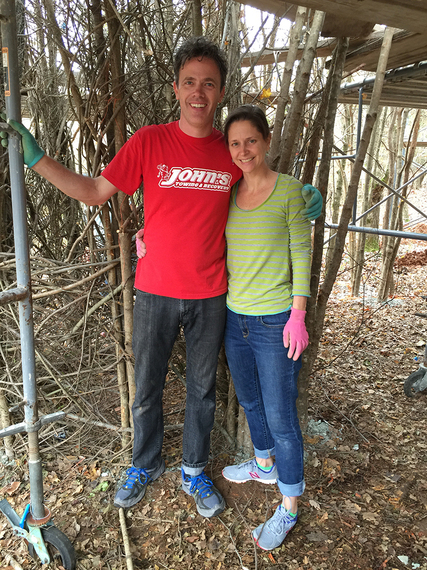 "Most art is something you observe and appreciate after it's finished," says Bemis, pictured here with his wife Amy Gorely. "But because Pat had volunteers helping with the actual construction, the sculpture reflects the creativity of our whole community. It is ours. It's art by our community for our community. This adds a deeper emotional connection to the artwork. Every time our family walks by it on the Riverwalk, we can't help but get inside it and gape in awe at this amazing new addition to Hillsborough."

After several weeks of gathering, stripping and construction, the sculpture was completed November 21. Dougherty doesn't believe in overworking his projects. He knows when a sculpture is done when he finds himself doing tiny adjustments without adding to the overall effect. Here's when his wise business head takes over and he says enough.

"The last sticks you put on it are the most important because you've got the structure in place," says Doughtery. "The aesthetic considerations at the end are kind of dolling it up and tightening the parameters and putting the polish on it..... Polishing is nothing but a series of finer scratches."

Dougherty doesn't name his work in advance, preferring to allow the project to speak its name during the creative process. In the Hillsborough Dougherty recalls people walking by the construction site, pausing to gaze over the mysterious limbs sticking up from the ground and wrapped with saplings and slender branches, then uttering something akin to, "What a sight to behold." From there he drew the name, "A Sight to Behold." And it is.