Antarctica and its surrounding waters are under pressure from a variety of forces that are already transforming the area, scientists warn.

The most immediate threats are regional warming, ocean acidification and loss of sea ice, all linked to global levels of carbon dioxide. Sea ice cover, crucial to the survival of virtually every animal that lives on and near the continent, already has been reduced by warming, according to a new study published in the July 13 issue of the journal Science. Visits by tourists, researchers and other people also threaten to change Antarctica, as does the harvesting of animals like krill that are key to the Antarctic food chain.

The continent is governed by the Antarctic Treaty System, a series of international agreements that regulates research and tourism. So far the treaty has done a good job of conserving Antarctica's environment and resources, said study co-author Diana Wall, a researcher at Colorado State University. But changes are happening so fast that they need extra attention, said Wall, who has conducted research for more than 20 years on nematodes and worm-like creatures in Antarctica's dry valleys.

The Antarctic Peninsula, only a few days' sea voyage from South America, is changing particularly quickly. The area surrounding the peninsula's Palmer Station, run by U.S. researchers, is experiencing the fastest winter warming of any place on Earth, and 87 percent of the peninsula's land-bound glaciers are in retreat, according to research cited on the station's website. [Album: Stunning Photos of Antarctic Ice]

In some areas of the Antarctic Ocean, sea ice is absent three months longer than it was a few decades ago. "The foundation of the ecosystem is melting away," said Hugh Ducklow, a biological oceanographer at the Marine Biological Laboratory in Woods Hole, Mass., who wasn't involved with the study. For example, loss of sea ice has hurt the Adelie penguin, which lives on the ice; its populations have decreased by 80 percent since 1975. Krill in the area (a primary food source for Adelies) also have decreased by 80 percent since 1991, according to a 2011 study in the journal Proceedings of the National Academy of Sciences.

Krill feed on Antarctic phytoplankton, microscopic organisms that use photosynthesis and provide the basis for the whole ecosystem. Loss of ice changes the abundance, timing and location of phytoplankton blooms, and not for the better, Ducklow told OurAmazingPlanet. Krill larvae feed beneath ice sheets, so loss of ice means fewer krill, he said.

While there's less ice, there are more people. Last year nearly 20,000 tourists visited the Antarctic Peninsula, according to the International Association of Antarctica Tour Operators. There are also more researchers, and there is more exploration for minerals and other resources.

There are "more scientists, more tourists, more research stations, more countries doing Antarctic research, and greater access to the continent in general, including the once-remote interior," said study co-author Mahlon Kennicutt, a scientist at Texas A&M University who has been involved in Antarctic research for 35 years. [Video: Life on the Antarctic Ice]

An increase in visitors means more disturbances to the fragile ecosystem, more pollution and more opportunities to bring organisms onto the continent from elsewhere in the world.

"It's impossible to keep people from bringing other organisms with them," Ducklow said. These organisms could include invasive species that significantly affect delicately balanced ecosystems.

With the visitors come the boats and other modes of transportation they use.

An increase in boats means a greater chance of an oil spill in an area that would be very difficult to clean up. More than a dozen "vessel emergencies" have been reported in the Southern Ocean in the past six years, according to a study cited in the new paper. That includes a Chilean vessel that went down in 2007 carrying 50,000 gallons (190,000 liters) of diesel. A Brazilian ship sank in April.

The Southern Ocean surrounding Antarctica is particularly vulnerable to acidification, since carbon dioxide from the atmosphere dissolves more quickly in cold water than in hot water, Ducklow said. This makes it difficult for mollusks and other shell-forming animals to grow, since acid eats away at these shells. 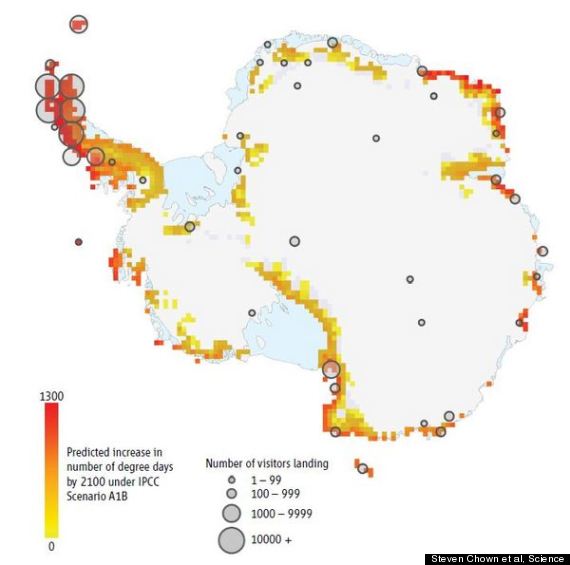 While the Antarctic Treaty forbids commercial mineral extraction on the continent, this provision is subject to change and doesn't stop the countries that haven't signed onto the treaty, the study warns. Ducklow sees this as a major challenge in the long term.

"With the increasing impact of climate change and need for fossil fuels and mineral resources, it seems inevitable to me that political and economic forces will lead people to consider exploiting Antarctica," Ducklow said.

The treaty also doesn't prevent offshore exploration, which is becoming more feasible as technology advances and demand for oil and other resources grows.

Areas such as the McMurdo Dry Valleys are some of the world's most extreme environments, with Mars-like conditions created by the cold and lack of moisture. Here a footprint can last centuries, due to the lack of disturbance.

Warming has changed the makeup of the unique organisms that can exist here, at the very limits of life. Co-author Wall said it's vital to preserve this continental laboratory, which has so many characteristics that exist nowhere else.

"Our whole thing is how to conserve Antarctica as a unique continent, and we hope the concerns we raise will be addressed by policymakers," she said.