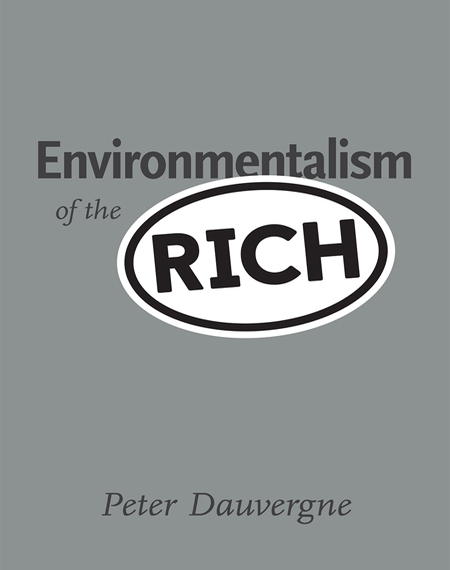 Environmentalism of the Rich / MIT Press

Peter Dauvergne, a professor at the University of British Columbia, has coined an interesting phrase for the incremental approach taken by environmental regulators, self-professed sustainable multi-national companies, and many mainstream environmental non-profits in the West: the environmentalism of the rich. His issue with this now-widespread shade of green: it may not be working.

In his new book Environmentalism of the Rich, Dauvergne paints a portrait of consumers in wealthy Western countries complacently purchasing their way to sustainability by swapping out old, inefficient products for new, smarter "eco" ones, or taking small steps to reduce energy and water consumption and carbon pollution. The idea promoted by many companies and non-profits is that consumers can continue to buy away if the products are "green." They can feel as if they are making a difference by making small, not-too-painful adjustments, which will together create larger global impacts one day.

These approaches are rooted in the perhaps-erroneous belief that "innovative policies, scientific ingenuity, and technology will allow for continuous economic growth." Furthermore, "trust is put in soft regulation, soft regulation, eco-certification, fair trade, and corporate self-regulation, while great promise is seen in corporate responsibility and individual goodwill."

The problem is these collective approaches are "not adding up to anything approaching global sustainability." Throughout the book, Dauvergne peppers depressing environmental indicators showing how trends worldwide are going in the wrong direction. Ecosystems are collapsing, biodiversity loss is increasing, carbon dioxide emissions keep going up, water is becoming more scarce.

These negative trends are only getting worse because the underlying issue is the rampant growth of all forms consumption worldwide, as Americans, Canadians, and Europeans continue to shop till they drop, and growing middle classes in developing countries aspire to reach the materialism of these countries. In coming decades, Dauvergne argues, if there are 10 billion American-style consumers on the planet, it won't matter if consumption is eco or not. Humans will have over-tapped the carrying capacity of the Earth; in fact, they may have already.

Dauvergne's critique is a harsh one but one worth considering. He states: "sustainability policies of governments and corporations may pay lip service to principles of ecology, but the underlying reason is almost always ahistorical, fragmentary, and linear, rarely integrating holistic or dynamic understandings of resilience, feedback loops, tipping points, and complex systems."

For example, some sustainability-minded multi-national companies, which he names, fund the efforts of big environmental non-profits to undo ecological damage in developing countries -- and they always do so in a way that maximizes public perception of their brand -- but, at the same time, ramp up their efforts to expand markets, reach more consumers, and increase consumption and growth overall, all of which exacerbate underlying ecological issues somewhere else. Consumption and growth, in their abstracted models, are most often divorced from any real-world ecological impacts.

This disconnect between growth and ecology continues because many developing-world companies and multi-nationals don't have to reconcile these competing demands. They can follow the same pattern established by colonial powers in the past: look for the cheapest and easiest-to-extract resources in developing countries where there is little accountability and maximize their extraction. If a regulatory hurdle appears, move to the next country.

Dauvergne uses a few chapters to go deep into these examples: the terrible legacy of phosphate mining in Nauru, the ongoing destruction of the rainforest due to palm oil production in Indonesia and Malaysia, along with a brief discussion of ranchers and soy farmers clearing the Amazon rainforest. He also explains how being an "environmentalist of the poor" -- an advocate in a developing country fighting environmental degradation -- is one of the most dangerous jobs one can have. Thousands of environmental activists have been murdered or disappeared over the past few decades.

Recent corporate and non-profit efforts to self-regulate natural resource extraction, like the Forest Stewardship Council, which covers around 10 percent of traded timber, and the Marine Stewardship Council, which certifies around 10 percent of seafood consumed, are having some positive impact. But he questions whether these efforts can scale up to cover the global marketplace, and whether these voluntary regimes can actually limit resource plunder when the rubber hits the road in coming decades amid exploding population growth.

He admits the environmentalism of the rich, which originated out of an American movement to conserve wild nature, has led to some gains: its "improving the administration of nature parks and the management of cities, as well as averting some known and immediate harms." He cites clean air and water in the developed world and many developing world cities, the spread of energy efficient green buildings, and the growth of recycling and power from waste as major wins. Corporations are now setting ambitious goals like "water neutrality, zero waste, zero deforestation, carbon neutrality, 100 percent sustainable sourcing, and 100 percent renewable energy, among others."

The problem for Dauvergne is that these well-meaning but perhaps superficial efforts don't get at the underlying issue: "much of today's wealth is a product of the globalization of the unsustainable world economy of ever-higher extraction, growth, and consumption, where violence, extreme inequality, and ecological risk-taking are the norms."

He wants a new deep green global movement that limits consumption and aims to change the fundamental human preference for growth. He calls for transforming the anti-establishment, anti-consumption movement -- which seeks to replace the annual shopping bonanza Black Friday with the protest gesture Buy Nothing Day -- into a more mainstream platform everyone can get behind. He's hoping some clever messaging and advertising will make reduced consumption more palatable.

Perhaps not buying things in the first place can become a moral good, just as throwing away unloved things has become one in Marie Kondo's best-selling ode to minimalism, The Life Changing Magic of Tidying Up. One reporter in London actually didn't buy anything she didn't absolutely need for a year and survived. Dauvergne wants everyone to take responsibility for their own consumption and reduce their ecological footprints to a "fair Earth share." For those in rich Western countries, it means setting a new example before it's too late.