Memo to environmental activists: It's the oceans, stupids.

This summer, hundreds of millions of people in the Northern Hemisphere will flock to beaches to swim, surf, wade, boat, fish, sunbathe, or even fall in love. To these revelers, the oceans are eternal -- as certain as the rising and setting of the sun, and a permanent bounty in an impermanent world.

But there is a rub: The oceans are living entities and they are in trouble. Much more trouble than the sun-seekers of summer can imagine.

Mark Spalding, president of The Ocean Foundation, says, "We are putting too much into the oceans and taking too much out."

In short, that is what is happening. Whether deliberately or not, we are dumping stuff into the oceans at a horrifying rate and, in places, we are overfishing them.

But the No. 1 enemy of oceans is invisible: carbon.

Carbon is a huge threat, according to ocean champion Sen. Sheldon Whitehouse, D-R.I. The oceans are a great carbon sink, he explains, but they are reaching a carbon saturation point, and as so-called "deep carbon" resurfaces, it limits the oxygen in the water and destroys fish and marine life.

There is a 6,474-square-mile "dead zone" -- an area about the size of Connecticut with low to no oxygen -- in the northern Gulf of Mexico. Dead zones are appearing in oceans around the world due to excessive nutrient pollution (especially nitrogen and phosphorous) from agribusiness and sewage. Two great U.S. estuaries are in trouble: the Chesapeake Bay and the Long Island Sound.

Warming in the North Atlantic is disturbing fish populations: Maine lobsters are migrating to Canada's cooler waters. Whitehouse and other Atlantic coast legislators are concerned as they see fish resources disappearing, and other marine life threatened.

Colin Woodard, a reporter at The Portland Press Herald, has detailed the pressures from climate change on fish stocks in the once bountiful Gulf of Maine. He first sounded the alarm 16 years ago in his book, "Oceans End: Travels Through Endangered Seas," and now he says things are worse.

The shallow seas, like the Baltic and the Adriatic, are subject to "red tides" -- harmful algal booms, due to nutrient over-enrichment, that kill fish and make shellfish dangerous to consume.

Polluted waterways are a concern for Rio de Janeiro Olympic rowers and other athletes. Apparently, the word is: Don't follow the girl from Ipanema into the water. The culprit is raw sewage, and the swelling Olympic crowds will only worsen the situation.

My appeal to the environmental community is this: If you are worried about the air, concentrate on the oceans. It is hard to explain greenhouse gases to a public that is distrustful, or fears the economic impact of reducing fossil fuel consumption. If I lived in a West Virginia hollow, and the only work was coal mining, you bet I would be a climate denier.

The oceans are easier to understand. You can explain that the sea levels are rising; that it is possible for life-sustaining currents, like the Gulf Stream, to stop or reverse course; and you can point to the ways seemingly innocent actions, or those thought of as virtuous (like hefting around spring water in plastic bottles) have harmful effects. 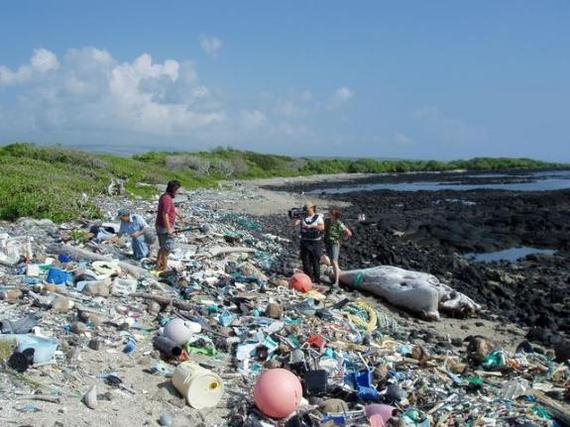 Plastic is a big problem. Great gyres of plastic, hundreds of miles long, are floating in the Pacific. Flip-flops washed into the ocean in Asia are piling up on beaches in Africa. Fish are ingesting microplastic particles - and you will ingest this plastic when you tuck into your fish and chips. Sea birds and dolphins get tangled in the plastic harnesses we put on six-packs of beer and soft drinks. They die horrible deaths. Sunscreen is lethal to coral.

It is hard to explain the way carbon, methane and ozone in the atmosphere cause the Earth to heat up. It is easier, I am telling my environmentalist friends, to understand that we will not be able to swim in the oceans.

I have met climate deniers, but I have never run into an ocean denier. Enjoy the beach this summer. -- For InsideSources