Everyday people are inundated with real time information that makes their lives, even the most mundane parts, more manageable. When I leave the house in the morning I can check weather patterns in real time on my phone. Back when the Red Sox were still alive I could find up to minute scores and stats (That's both good and bad). If I were into fantasy baseball, I could get up to the minute calculations for my team on my iPhone while games are still being played.

With so much information readily available at the tips of our fingers, the slow pace of information dispersal from the government only engenders distrust. The contrast between government and our real-time real life is simply too stark not to be frustrated by. Campaign contribution reports come out every four months, lobbyists don't disclose their actual meetings, and Congressional committees only post information online at their discretion. The information that people need to see in order to understand who's playing the game in Washington -- not to mention who's on first -- is not readily available -- and in some cases it's not available at all.

Just think how easy it is to get the history on a car through CarFax. What the public needs is a daily GovFix, an up to the minute, mobile phone accessible, real time accounting for our government leaders. If I can find out that my used car was in a rear collision accident in 2004, why can't I know that my congressman had a collision with a telecom lobbyist at a fundraiser and left the scene with a $2,300 campaign contribution? If I get a receipt immediately after every single I purchase I make throughout the year, why can't I get a receipt to see how my single biggest expenditure -- my tax dollars -- are spent?

Well, I think you should be able to. And I think we can get there.

Imagine a world where the entire influence economy in Washington were available to the public, online and in real time. The coverage of the health care debate would be far different if newspapers featured widgets on their web sites showing the daily "take" for local congressmen and senators from the health insurance and drug companies. A daily updated database of lobbyist contacts would show which special interests were involved in the secretive Baucus Gang of Six meetings over the summer. Imagine a searchable and downloadable database of all Congressional earmarks so in an instant you could see what government is spending our tax dollars on. Imagine having this sort of information across the federal government right now -- being able to track who is paying for lobbying whether in Congress or at the regulatory agencies, and what those discussions entail. One could quickly sort or browse all paid lobbying for individual clients or issue areas, and understand what agency actions are up for grabs.

At the Sunlight Foundation we've envisioned such a world starting with the executive branch -- and true to form, it's complete with web mock ups.

Picture a single website that would function as a portal for all government agencies' to file daily reports on lobbying meetings (image 1), and allow the public to examine and search through the disclosures (image 2). 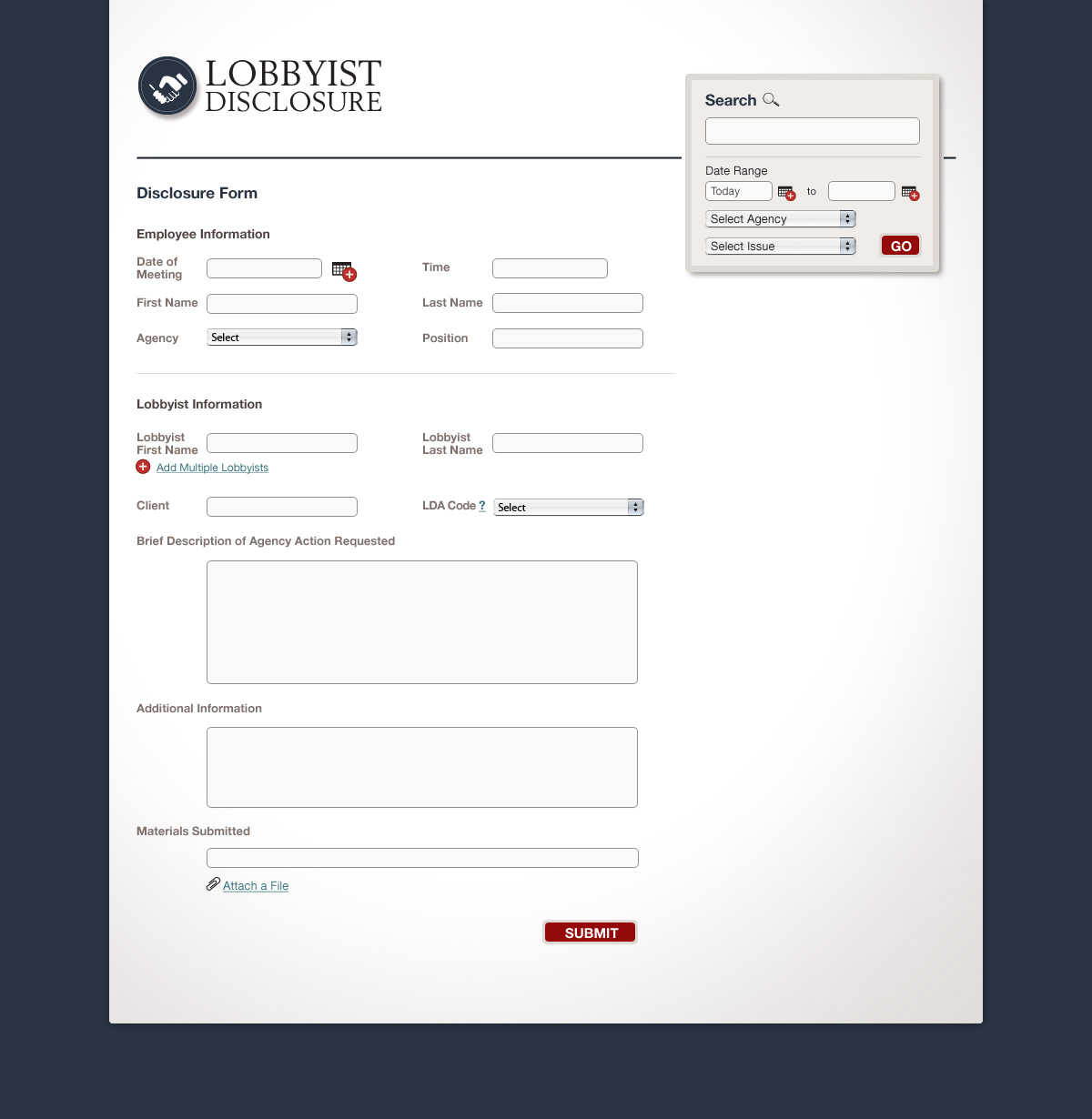 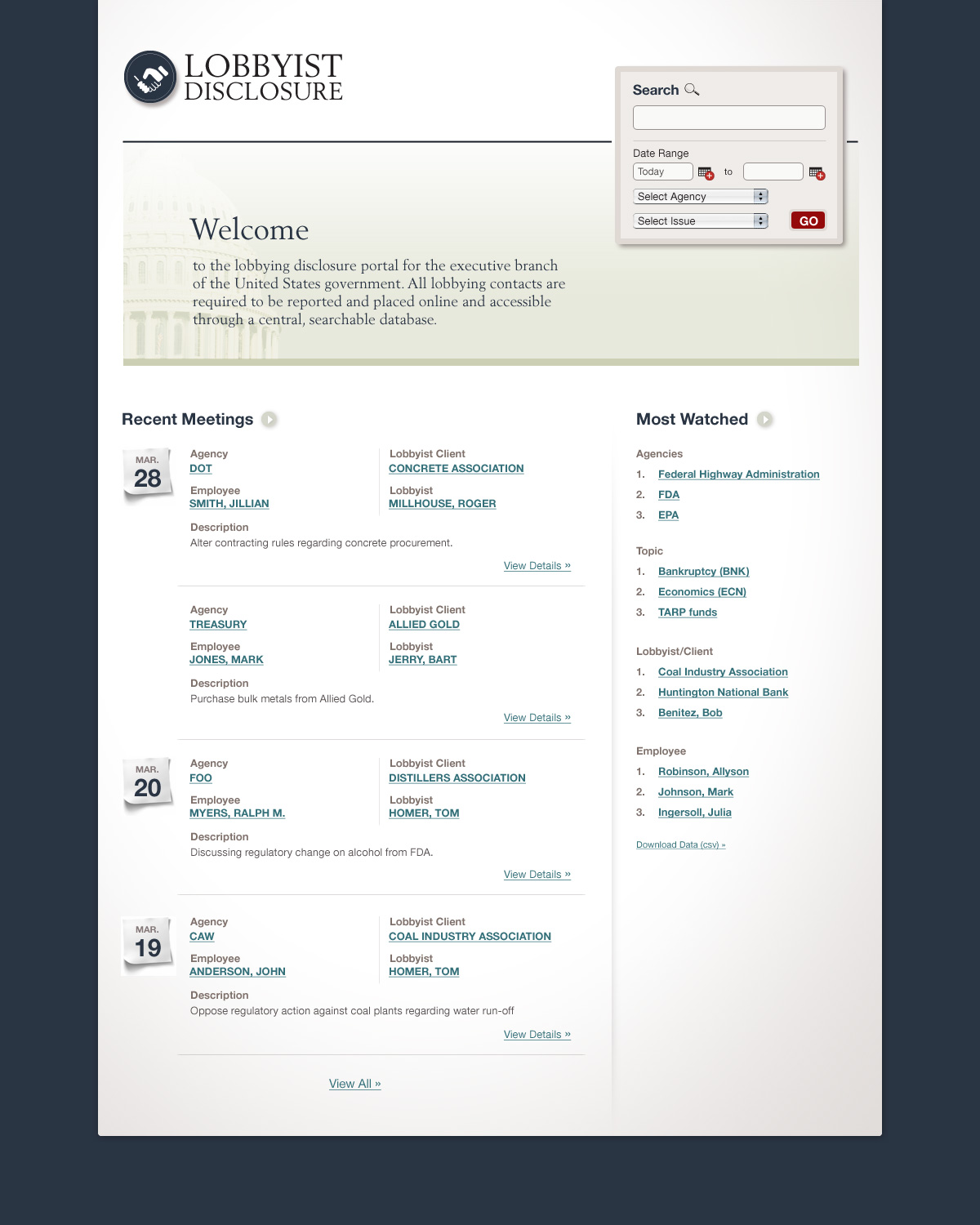 One need only look briefly at the images to get a sense of the types of things we could expect to see. It's just a start, but it's the kind of information that would be valuable for citizens, journalists, and even agency heads and employees who are striving to evaluate decisions and understand what kinds of pressure they're feeling.

In short: this kind of simple disclosure in just one arena of the influence economy -- lobbying -- would be a game changer that would help us make better decisions and build public trust.

And what's more, with real-time access given us through the Web, this level of government transparency and accountability is actually possible. And it's possible in your pocket. That's something we couldn't even say as recently as five years ago. Information sharing is now part of the exponential curve that quits curving and just goes straight up. Today, we can present vast amounts of data meaningfully, and almost as fast as it can be created.

What this means for government and the future of citizen engagement is unprecedented.

We are on the cusp of new era of democracy and participation and it will be heralded by online, real-time government. Two hundred thirty-three years after we launched this grandest of experiments, it's time for us to take it to the next level.

Our founders would have drooled.

Co-founder and Executive Director of the Sunlight Foundation