The Environmental Protection Agency on Thursday finalized its proposal to loosen rules on oil- and coal-fired power plants’ emissions of mercury and other toxic pollutants in its latest rollback of public health protections during the coronavirus pandemic.

The proposed change to the Mercury and Air Toxics Standards (MATS) does not completely abandon limits on mercury pollution, which damages brains and lungs, but changes the methodology regulators use to weigh the pros and cons of such restrictions, giving more weight to the economic costs and less to the indirect benefits to public health.

“There will be no increased mercury emissions,” EPA Administrator Andrew Wheeler said on a call with reporters Thursday evening. “The outrageous claims by the environmental community that this is in some way going to cause mercury emissions to go up, they’re either not reading it or they’re purposely misrepresenting it.”

Rather, he said, the changes met the requirements of a 2015 Supreme Court decision in which the conservative majority ruled it was “appropriate” for the EPA to consider whether the cost to businesses of complying with the rule outweighed the direct benefits to public health.

Wheeler said the Obama administration took a “dishonest” approach to interpreting the rule that tipped the scales “so any regulation could be justified regardless of cost.”

“It’s not too often that the Supreme Court hears an environmental case,” Wheeler said. “When they reach a decision, we have a responsibility to listen to the court and follow their direction, which is what we’re doing.”

“There is no plausible economic argument for this one-sided approach,” said Richard Revesz, a professor at New York University’s School of Law. “The hypocrisy of this move is particularly striking.”

The announcement Thursday came two weeks after the administration moved forward on its biggest rollback of Obama-era climate rules to date, which weakens rules on tailpipe emissions and, over the next five years, allows automobiles sold in the United States to average far fewer miles per gallon than vehicles sold in most of Europe or East Asia.

The proposal, pushed by both EPA and the Department of Transportation, argued that Americans favored gas guzzlers, and new vehicles with more safety features reduce the risk of deaths in auto collisions. Therefore, the agency said, clearing the way for less fuel-efficient vehicles had the indirect benefit of saving lives.

“So, it looks like the Trump administration’s approach is to rely on co-benefits when their consideration supports weaker regulations but ignore them when they would support rules protecting the health of Americans,” Revesz said.

The oil industry, which quietly lobbied the Trump administration to gut the auto emission rule, could be the biggest beneficiary of that rollback. But it split the auto industry, with several major carmakers backing California regulators’ campaign to keep the existing standard in place.

Thursday’s rule change could similarly divide the coal industry. When the EPA first proposed loosening the rule in 2018, trade groups representing utilities ― including the Edison Electric Institute, the National Rural Electric Cooperative Association and the American Public Power Association ― urged the agency to keep the rule in tact because power companies had already invested in the equipment required to comply.

But legal experts warned that the new rule focusing on costs could prompt litigious coal-mining companies such as Murray Energy, for which Wheeler worked as a lobbyist until 2017, to challenge the MATS regulation outright. Doing so could end up encouraging some utilities to mothball retrofits on plants and burn more coal, or increase the (currently slim) chances of a new coal plant being built.

“Only in this upside-down Trumpian world could EPA consider already-implemented controls on extremely deadly pollution from coal-fired power plants not ‘appropriate,’” said Ann Weeks, legal director of Clean Air Task Force. “If today’s action ultimately spurs challenges to the MATS, we could see coal-fired power plants actually turning off scrubbers and other lifesaving air pollution controls that have been installed and paid for to meet MATS, just so Trump’s coal industry cronies can sell a few more tons of coal.”

The potential outcome seems unlikely to stem the growing list of coal companies that have gone bottom up since President Donald Trump took office. On Tuesday, Longview Power, a West Virginia coal-plant operator once hailed as a model for the industry’s future, declared bankruptcy.

Asked how the rule change improves public health, Wheeler said it “forces the agency to be more upfront about the regulatory costs and benefits to the public.”

“It’s honest accounting,” he said, growing audibly frustrated on the call. “As a society, we have limited resources to address different problems. If we’re going to address a particular pollutant, we need to be upfront and honest with the American public about what those pollutants are.”

But the decision came as the administration ramps up its efforts to scale back regulations on polluters in what critics view as a cynical bid to complete unpopular rule changes while the nation is distracted by a pandemic that has already killed more than 26,000 in the U.S.

Days before the auto rule was finalized, the EPA halted enforcement of the most basic clean air and water rules for the duration of the pandemic, a decision the agency downplayed as temporary but that environmentalists blasted as giving companies carte blanche to pollute. Meanwhile, the Interior Department approved a slate of new fossil fuel projects and held an auction to lease new offshore drilling permits in the Gulf of Mexico. 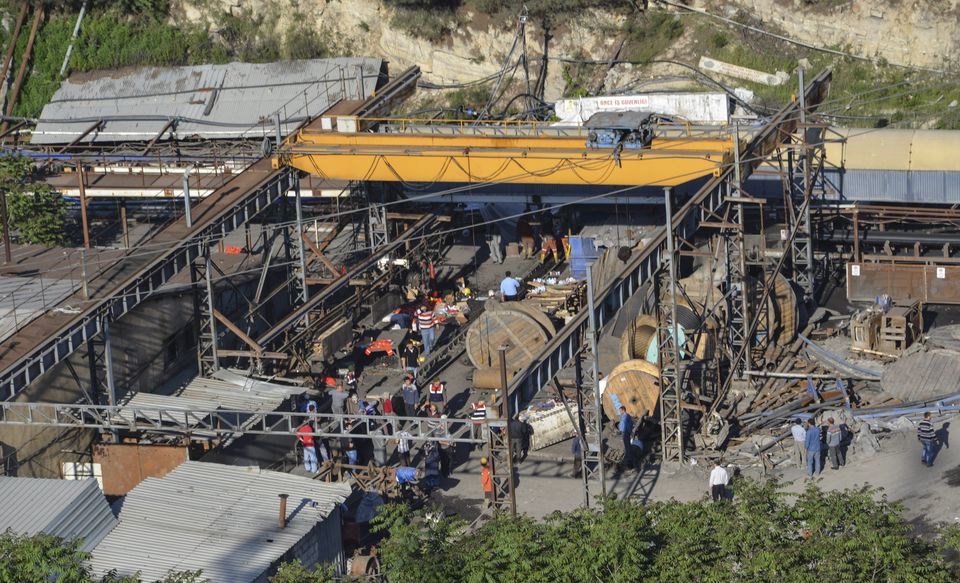 1 / 12
People gather at a mine in the Soma district in the western Turkish province of Manisa on May 13, 2014, after it collapsed due to an explosion following an electric fault. (STRINGER/AFP/Getty Images)
Getty Images