"Next Steps for the Anti-Mountaintop Removal Movement" will be a series of interviews with affected residents and activists in the central Appalachian coalfields region, including West Virginia leader Bo Webb, Kentuckian Teri Blanton, Kathy Selvage in Virginia, Ash-Lee Woodard Henderson in Tennessee, and Appalachian Voices legislative aide JW Randolph in Washington, D.C. While the EPA scrambles to enforce the Clean Water Act and a Republican-controlled Congress attempts to defund strip-mining regulatory measures, and various state agencies continue to be embroiled in Big Coal machinations, millions of pounds of devastating explosives are detonated daily across mountain communities in central Appalachia. As a national movement, what should anti-mountaintop removal activists do next?

One year ago today, invoking the rule of science and law and raising the concern health care in the coalfields, the EPA issued strict guidance rules to crack down on mountaintop removal mining. What has happened since?

Hailed as a cross between Erin Brockovich and the legendary Aunt Molly Jackson, Harlan County native Teri Blanton has been one of the most inspiring and fearless activists on the eastern Kentucky coalfield frontlines. While national media attention on mountaintop removal mining has been focused on West Virginia, Blanton often reminds audiences that more than 290 mountains and 574,000 acres of hardwood forests -- 58 percent of the devastation in central Appalachia -- have been blown to bits by reckless mining operations in eastern Kentucky. A long-time fellow and strategist with the Kentuckians for the Commonwealth on clean water, clean energy and coal issues, Blanton most recently took part in the 4-day Kentucky Rising sit-in at the governor's office in Frankfort, Kentucky, calling for an immediate end to mountaintop removal. 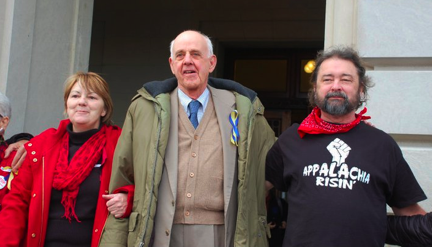 JB: Thanks to years of advocacy and actions by a growing movement, the EPA issued strict guidance rules on mountaintop removal operations last year, which EPA administrator Lisa Jackson acknowledged would end most valley fill operations. Do you think the EPA has gone as far as it possibly (and politically) can in "regulating" mountaintop removal or should the EPA still be the focus of lobbying pressure?

TB: I think the pressure needs to continue to be on the EPA. I think it is their ultimate responsibility to enforce the Clean Water Act and the Clean Air Act, and if the states or other agencies with delegated authority are unwilling to do so, then it should be the responsibility of the EPA to take back the authority of the states and enforce these laws to their fullest.

At the same time we can't ignore movements in Congress to try to nullify EPA's actions or strip their authority -- either through the changes through law or with extreme budget cuts. We need to continue to identify these measures for what they are: shameless political payoffs to a favored industry at the expense of the environment and the American people.

JB: Do you think mountaintop removal mining needs to be framed as only an environmental issue -- and thus, attracting more support from mainstream environmental organizations in D.C. and beyond -- or as a human rights and health care issue?

TB: This is much more than an environmental issue; it is a human rights issue. The only difference with what is happening in Appalachia and the exploitation of indigenous cultures by multi-national corporation is that mountaintop removal mining happens to be occurring within our own borders. Everything else, from robbing a people of their wealth to stripping them of their political power to destroying their health and culture.

JB: After years of lobbying and leading protests in Kentucky and Washington, D.C., where do you think the anti-mountaintop removal movement should focus its funds and energy in the next phase -- and more importantly, where should foundations and major fundraising efforts be dedicated?

TB: We have to continue to work at this issue through all three branches of government, and through administrative pressure and legislation moving the Appalachian Restoration Act, the Clean Water Protection Act and also stopping the bad legislation. And what really talks to them is the litigation and the large number of people involved by taking them to court when they are not abiding by the laws set forth.

We need more funds dedicated to organizing and general support, the organizations on the ground know where the needs are for the communities, because they are the communities being impacted.

If I could have one wish for how to really put a dent into what is happening I think I would wish for tort attorneys and expert witnesses to sue the bastards for trespassing or for denying my right to enjoy my home. Or in the case of my friend Bopper, for destroying the health of his young daughter from breathing coal dust. One attorney said I can't gamble $15,000 of my firm's money. 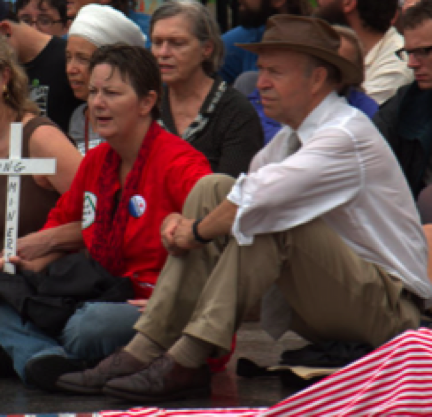 JB: Appalachia Rising -- an alliance of various groups and advocates -- brought over 1,000-3,000 anti-mountaintop removal protesters to march in Washington, D.C., last summer, where over 100 people were arrested in front of the White House. That was nine months ago. Last month you took part in a 4-day sit-in in the Kentucky governor's office for an action called Kentucky Rising. What has happened since, and should Appalachia Rising just be an annual event to call attention to the mountaintop removal or should it be organizing more sustained and frequent actions?

TB: We are all gearing up to show our support for the March on Blair Mountain, and of course, there are a couple of lines we have drawn in Kentucky, and when those lines are crossed we are ready to take a stand.

One must never tip its hand too far, Jeff, but we know that we have to stop the destruction of our homeland with the extraction of coal, and people around the world are realizing that coal is killing our planet and our children will pay for the disrupted climate patterns it is going create. When we all stand up together we will be a power to reckon with but for now we will continue to rise.

JB: The anti-mountaintop removal movement has become a national movement, involving mainstream citizens and environmental organizations based in Washington, D.C., and San Francisco and across Appalachia, direct action groups and impacted residents. A similar national movement to end poverty in Appalachia -- and to end strip-mining -- took place in the 1960s, and the question was often asked: Who speaks for Appalachia? What role should affected residents in coal mining communities play in the national anti-MTR movement?

TB: Mountain top removal is but one of a number of issues that will be addressed as our country develops an energy plan for the future. Ending mountaintop removal is a hollow victory if it just results in increased coal production for my Native American friends out West or the Powder River Basin or for my friends in the Midwest farming country that is being strip mined.

People from affected communities from across this nation need to be at the table and speak about the true cost they are paying for this so called cheap energy.

JB: The first bill to end strip-mining was introduced in 1940 by Sen. Everett Dirksen -- 70 years ago. US. Rep. Ken Hechler, from WV, introduced a bill to abolish strip-mining in 1970, and held the first hearings on mountaintop removal in 1971. Do you think it is important to maintain a citizens lobby force to push Congress, especially this current Republican-held House, to change course and abolish MTR?

TB: I think it is just as important to talk with those that don't agree with us as to talk with those who are in line. We must not stop going to D.C. to talk with our elected leaders because they are not of our particular party; they are the ones who need to hear the stories from the impacted communities they are elected to represent; they need to hear of children smothering with asthma in their own homes because of coal dust or the fear of going to sleep from flooding when it rains, or the fact that they can not drink the water from their homes or the water fountains at their schools.

JB: Direct action -- nonviolent protests and civil disobedience -- have been a driving force in the anti-strip-mining movement since the 1960s, and saw renewed interest from campaigns led by Mountain Justice and Climate Ground Zero in West Virginia in the last few years. What role should direct action -- either periodical actions or a sustained campaign -- play in the future?

TB: Decisions to employ nonviolent civil disobedience have to be generated at the local level in any event. While I totally agree with nonviolent civil disobedience, we need to be careful that we don't alienate the public we are trying to reach by employing extreme measures. We have the moral high ground and we refuse to give it up. We know that what we are standing for is right and as long as we do it with right on our side we will prevail.

JB: Strip-mining takes place in 24 states, including new proposals in the endangered Cook Inlet in Alaska, the Shawnee National Forest in southern Illinois, and wilderness areas near Bryce National Park in Utah. As you know, Sec. of Interior Ken Salazar just green-lighted strip-mining operations in Wyoming that will produce 750 million to 2 billion tons of coal -- several times the annual production of all Appalachia. Why should a national anti-mountaintop removal movement only lobby to halt mountaintop removal in 4 central Appalachian states, and not other affected regions?

TB: Policy issues that we face in Central Appalachia are much different than policy issues facing these other regions. I think we must move away from coal altogether and shifting the destruction from my backyard to someone else's is not the answer. I think we will all do better when we work together to bring out the true cost of coal onto our entire planet.

Anytime anyone wants to work on the overhaul of SMCRA, count me in.