As USA Today might say, "Okay, America, time to make up our minds!"

No more wondering, guessing, dreaming or conjecturing (someone ask Ms. Palin if that's a word); we now officially know enough about these cars of the future to say we love or hate them.

What else. Those generally ugly, small and uncomfortable new-fuel, high-mileage vehicles which are the Second Coming to some, the end of the auto world as we know it to others.

Every major carmaker (and most minor carmakers too) now offer gas-electric hybrid models, whether conventional or the new plug-ins. And "pure EVs" are not only coming, they're here, at least in the guise of the Nissan Leaf and the soon-to-come Ford Focus and Mitsubishi i. These are exciting times for the industry, those of us who cover it and the billions worldwide who follow it and buy the product. After all, technology which has been promised, in one way shape or form or another, for the past 50 years, is now for-sale in showrooms and ready-to-drive. 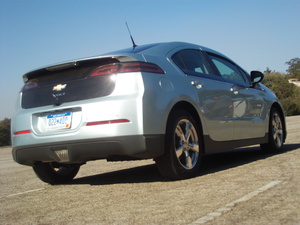 Yet a fundamental question still arises: is this trip really necessary? Is the re-working of the world's entire auto industry the best thing to do when gasoline-only and gas-electric hybrids are achieving impressive mileage figures for a fraction of the cost of the development of EVs? Given the long-term tepid outlook for the world economy, is the near-future the right time to force those costs down consumers' throats? Should these efforts be shut down until there's more cash flowing worldwide?

And beyond current technologies, companies from Honda to Exxon are still heavily hyping more exotic fuels and systems including hydrogen. While Nissan and other EV and plug-in hybrid makers are ambitiously working with utilities and municipalities to develop the infrastructure necessary to keep their new cars charged, filled and moving down the road anywhere in the world, the costs of an even more-advanced infrastructure for something like hydrogen fuel could dwarf what's necessary for EVs.

Toyota introduced the world's first mass-produced gas-electric hybrid car, the Prius, in Japan in 1997 and worldwide in 2001. Almost instantly and predictably, several camps of fans and haters developed. These range from "hypermilers," whose mission in life is to squeeze out every available inch of mileage from whatever fuel is powering their conveyance, to nay-sayers who claim gasoline and hybrids are achieving such high mileage figures that the investment and hype in EVs is unnecessary.

Now Prius competitors are here in large numbers, and pure EVs threaten to wrest the technology (and interest) crown from Toyota. Toyota's hegemony in the field was over the moment the doors to the Los Angeles Auto Show opened two weeks ago and the official EPA figures for the Chevrolet Volt and Nissan Leaf were announced.

Both these cars, one a true pure electric, the other an extended-range hybrid, will be on sale in various parts of the nation within the next few months. Mitsubishi i-MiEV full electric (reviewed here recently) will begin sales here in late 2011 and will be called the "i".

Never to be outdone, Ford, which is racking up a tremendous record in superior product and sales the past two to three years, will have their Focus EV on the streets in 2011 as well. The Focus family won the Motor Trend Car of the Year award in 2010.

Leaf will produce what the EPA calls an electric "equivalent" to gasoline of 106 mpg (city) and 92 mpg (highway) when full of charge. This sounds pretty impressive but the bottom-line is that the car will offer a range of only about 73 miles from a full battery charge of seven hours at 240 volts. 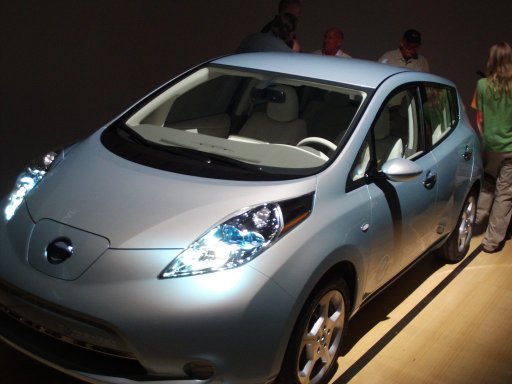 Leaf may not do a lot to alleviate our newest official disease, "range anxiety" (driver worry concerning how many miles are left in their car) but enough people will buy them as second or third cars and just because they're interested enough in the technology -- and want to be the first adopter on their block -- that Nissan will have little problem selling-out their relatively small planned production numbers (about 20,000 a year initially from each of four initial factories worldwide).

And then there's the Motor Trend Car of the Year for 2011, Chevrolet's Volt. Initially hyped as an "extended-range hybrid" because Volt uses both an EV system to power the car's front wheels as well as a gasoline engine which produces electricity for Volt's batteries, GM eventually took to calling Volt an EV which would make over 230 mpg and offer a range of over 600 miles.

Oops. One might call all that "typical GM exuberance," if one were generous, and thankfully the General has cut back the hyperbole and seems to understand there's nothing wrong with Volt just the way it is. In fact, GM now says Volt is "more car than electric." They're good, though, aren't they?

Volt will go just under 40 miles on electric-only when the car starts out on a full battery, then the hybrid system kicks-in, making another 300-or-more miles, giving Volt a respectable range until the car needs an electric charge and gasoline. Actual figures? In EV-mode only, the EPA says Volt achieves 93 mpg; when the hybrid system kicks into operation, that figure drops dramatically to 37 mpg.

Volt's true upside is that the gasoline engine gives the Chevy Volt a total range of 379 miles, on a full initial battery charge and a full tank of gas. And it's probably the most interesting looking, inside and out, of all the cars in these new-fuel categories.

So do we love or hate this new generation of cars? As for me, let's say I like them. But is all this engineering worth the cost? And can some fun and excitement be built into them, other than the kind Sesame Street's Dr. Beaker would enjoy?

The most important thing, though: what do you think? Are you a first adopter or you will be driving your 2011 Cruze into the ground, enjoying its superior mileage -- from its gasoline-only engine?