Way back in 2007, student Hayden Barnes was kicked out of Valdosta State University (VSU). Barnes was labeled a "clear and present danger" to campus and would not be afforded notice or a hearing before he had to leave.

The justification for Barnes' expulsion? A collage--seen below (This is a faithful re-creation. The blurry original can be viewed here): 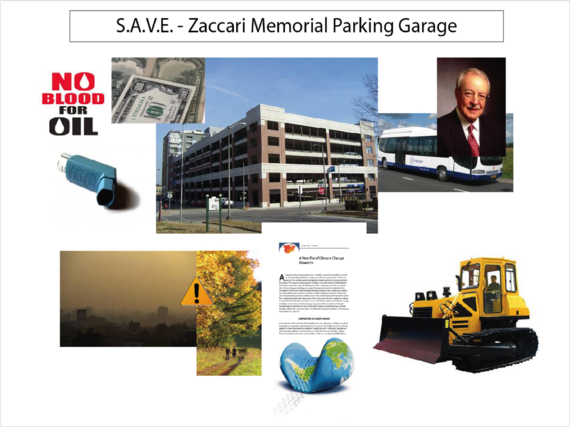 The collage was posted on Barnes' personal Facebook page and was part of a peaceful protest he mounted against VSU President Ronald Zaccari's plan to build two new parking garages on campus. An environmentally-minded student, Barnes thought there were more eco-friendly solutions to solving the university's parking problem and wrote letters to school administrators and the campus paper arguing as much.

Zaccari was frustrated by Barnes' protest. Looking for a way to get rid of him, Zaccari seemed to have concluded that the Facebook collage offered a perfect opportunity. VSU argued that because memorials only happen when you are dead, the collage constituted a threat upon Zaccari's life. In fact, the use of the word "Memorial" in Barnes' collage was a joke about Zaccari's own reference to the parking garages being part of his "legacy."

The courts have not bought Zaccari and VSU's story, however. Last year, a jury thought Zaccari's behavior so clearly unconstitutional that it found him personally liable to the tune of $50,000. Piercing what is known as "qualified immunity" is an extraordinary step and it only happens when the jury is convinced that a state official knew, or should have known, that they were violating a clearly established constitutional right.

The answer is that because Barnes' complaint used the word "conspiring" twice in the course of detailing Zaccari's actions, the district court inexplicably decided to construe Barnes' First Amendment claim as alleging a "conspiracy" to violate Barnes' free speech rights, rather than simply alleging a First Amendment retaliation claim. Having fundamentally misread Barnes' complaint, the district court proceeded to reach the bizarre conclusion that since administrators warned Zaccari that he was violating Barnes's First Amendment rights, Zaccari acted alone--and voila, no "conspiracy."

Thankfully, the buck did not stop at the district court level. The case is currently in front of the United States Court of Appeals for the Eleventh Circuit and my organization, the Foundation for Individual Rights in Education (FIRE), has put together a remarkable coalition of groups from across the country and across the political spectrum to file an amicus brief on behalf of Barnes. We argue that the district court's decision regarding the First Amendment makes no sense and signals to other college administrators that they can ignore First Amendment rights at their leisure.

FIRE is extraordinarily proud to have assembled this excellent free speech coalition and we hope that the Eleventh Circuit will not shy away from vigorously vindicating the right to dissent on campus.