EPIC from Dark Rye on Vimeo.

Taylor Collins and Katie Forrest live for that moment when you break through as an extreme athlete, a point where time and space doesn't matter, when it's just you, your bike, your body and the moment. They figure the best way to get there is to eat a balanced diet. A few years ago, they were on a "boot camp vacation" in the mountains of West Texas. Unlike most people on vacation, they'd decided to use their free time to push their bodies and their minds to the limit. Katie was training for the Ironman World Championship Race, and Taylor was a competitive triathlete who had no problem, as he puts it, "running with the buffalo spirit."

They had packed their bags full of the standard modern survival fare, sugar-and-carbohydrate-packed gels and energy bars. Halfway through the trip, they collapsed from exhaustion, "overcome with fatigue and hunger." They needed real food.

As Taylor writes on their website, "That night as we sat at our campsite, hungry and weak, Katie asked, 'What if there was a whole foods snack, low in sugar, high in nutrients, and loaded with protein and healthy fat?' I thought for a moment, and simply answered, "That would be epic!" 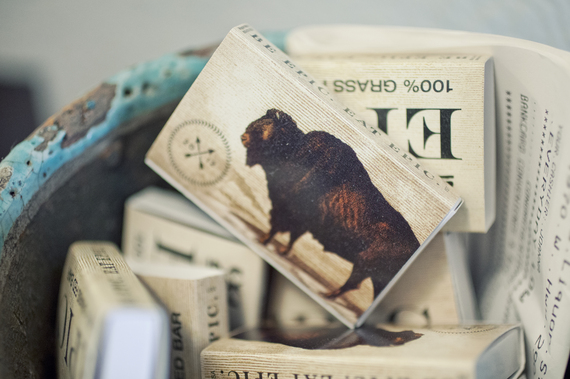 EPIC bars may be the only food on Earth born from a mega-athlete's desperate need for animal protein. The website Stupid, Easy, Paleo reviews them as follows: "It reminded me of taking what I love about jerky packs -- the meat, fruit and nut trinity -- and rolling it all into one convenient, handheld option."

Their Bison Bar contains organic pastured buffalo, bacon and cranberries. The Beef Bar contains habaneros and cherries. The Turkey Bar mixes almond and cranberries, and the tasty Lamb Bar recipe mixes in currant and mint. All the animals that go into their bars are vegetarian-fed and free of antibiotics and added hormones. "We believe that EPIC animals should always live pasture-centered lives, where turkeys forage, pigs wallow and buffalo roam," they write on their website.

But extreme athletes cannot live on meat alone. EPIC's sister company, Thunderbird Energetica, came about while Katie hurt her knee training for another extreme race. She had to get off the bike for more than a month and sought refuge in natural anti-inflammatories like buckwheat, turmeric, cherries and cinnamon. This led to their first vegetarian bar. Now they have a line of 10 that include natural ingredients, such as almonds, cacao nibs, carrots, coffee beans, dates, and even maca root powder. If you're going to live on bars -- and hard-training athletes, for better or worse, often do -- then at least they should be healthy, not packed with sugars and processed carbs.

"While eating our own creations, we noticed that not only were we riding longer and faster, but we were becoming leaner and recovering quicker," Taylor and Katie write on their website. "We had a new competitive advantage!"

This video from Dark Rye was produced and edited by Ira Chute.