Try this. Take your right index finger and run it roughly across your left forearm. Nothing happens, right? You see the skin ripple, but it springs back like before.

But if you had a skin condition called Epidermolysis Bullosa ( EB), even that small touch could leave a blister, and soon break apart, exposing raw flesh.

When you first meet John Hudson Dilgen, (in the video "Boy with Butterfly Skin",) he is wearing what appear to be white sweats. He is smiling and talking, a beautiful regular little boy, the kind who would be running around like crazy at the school playground, and last to come in from recess.

It takes a moment to realize the "white sweats" are bandages, which have to be changed every day.

The title "Butterfly skin" comes from the idea that EB skin is fragile as a butterfly's wing, and that is not far off.

In a healthy child's body, the layers of skin stick together by the body's natural glue: collagen. In John's type of EB, the collagen gene is missing or insufficient, and the outer layer (epidermis) can easily break away.

Any friction, however slight, can create a painful wound. When John was born, he had no skin on his feet from the trauma of child birth.

"Bathtime", said his mother, was "heartbreaking, with relentless fear and screaming..."

He loved potato chips, but a rough or sharp food can be deadly for a child with EB, doing damage to the esophagus. Imagine being afraid to hug your child too hard, lest you break their skin!

Today John Hudson Delgin is 13, but the disease is still with him. If he rubs his eyes, the corneal erosion may require him to spend several days in a completely dark room. 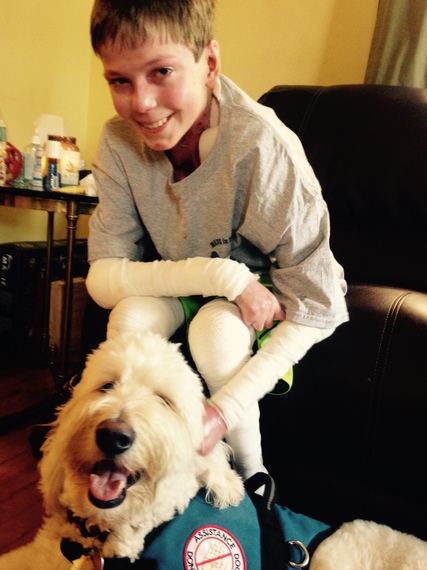 EB is a rare condition, sometimes called an "orphan disease". This is a good news/bad news situation: we want it rare, because no child should have to suffer such continual pain--but it also means the number of patients wanting cure may be too few to attract corporate money.

As a colleague put it: "Some worry that even if a cure were to be developed, revenues from the therapeutic product would be insufficient to justify the corporation's initial investment--based on limited demand." Mary Bass, Americans for Cures Foundation-- personal communication.

Yet there are very practical reasons to support "orphan disease" research. Other conditions may be very similar: improvements for one may help another.

"There are over 200 genetic skin diseases that could in principle be treated with this approach. Similar therapeutic reprogramming studies are being developed for other tissues like heart, brain, pancreas, liver and cornea. The 'road plowed with skin' can make the manufacturing and regulatory tracks much easier for subsequent therapies." - Anthony Oro, Stanford, personal communication.

EB is rare, but skin diseases are very common, affecting as many as 2% of the population. There is also the huge problem of wound healing, which affects millions every day. Finally, cancer research might benefit. EB sufferers often die of a deadly cancer called squamous cell carcinoma. Studying the skin of an EB patient may determine the trigger-point of many kinds of cancer-- potentially benefiting millions.

And--"It might be worth mentioning that treating rare diseases is the first step toward achieving...(the) personalized medicine that the Obama Administration has highlighted as a priority."--Julia Jenkins, Executive Director, EveryLife Foundation for Rare Diseases, personal communication.

Stanford University is heavily invested in this effort, with a superb dermatology lab.

Let's focus on just three of Stanford's outstanding scientists, who received an $11 million grant from the California stem cell program.

They are: Alfred Lane, Primary Investigator (PI), an expert at FDA regulatory affairs and former Director of the EB clinic at Stanford; Co-PI's on the project were: Marius Wernig, stem cell reprogramming authority, who once came to a formal science event wearing a tuxedo and tennis shoes; and Anthony Oro, a skin genetics and development expert, who not only attempt the impossible with the invisible in science, but can also explain it in people-talk.

Their weapon to take on EB? Induced Pluripotent Stem cells (iPS), that micro-manipulation of skin cells which won Shinya Yamanaka the Nobel prize.

Here is my layman's understanding of what they must do.

1. Take a tiny skin sample from the patient;

2. Using the iPS process, make personalized stem cells from the patient: "regressing" the cells back to an embryonic-like state;

4. Do quality control on the corrected iPS lines to remove those with unwanted pre-existing genetic changes;

6. Make the healthy new skin and graft it onto the patient's wounds.

Grafting improved human skin cells onto the backs of lab mice, the initial steps have completed.

Now new funding must be raised to "translate" this breakthrough science from theory to therapy: so that good skin can be traded for bad--healing patients.

Will it work? And if so, when?

Help us fight. Bumped elbows and skinned knees of children should be minor inconveniences, nothing more-- and epidermolysis bullosa should be remembered only because it is a hard word to pronounce.

Don C. Reed is the author of the forthcoming book STEM CELL BATTLES, available for pre-order at Amazon.com.