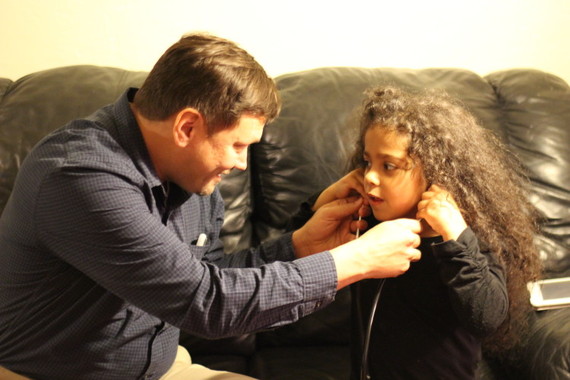 My daughter was just two years old when she had her first seizure, due to Epilepsy. I didn't see it happen. I wish I had, because for the longest moment of my life, as I held my daughter in my arms, screaming out to the world for help, I thought she was dead. She was blueish and I couldn't find a pulse. I started performing CPR on her while I waited for the ambulance to arrive.

At the time, my now sixteen-year-old son was twelve. I heard him screaming for me but I could barely recognize his voice because it was full of terror. He was racing towards me with his baby sister in his arms, screaming, "Save her mommy! Save her, please!" She was limp and heavy. Her facial features seemed to have somehow disappeared. I was so horrified that I almost vomited in her mouth while I was performing CPR. She looked dead. She felt dead. I thought I was going to die right there with her. That was the worst moment of my life. Once she began breathing again, my older children disclosed that they had witnessed her shaking before she stopped breathing. The hospital determined it was a febrile seizure and did not seem too concerned.

Months later, she began having seizures again. There were no full-body convulsions or anything else that made me believe she could have Epilepsy. I didn't know. In fact, her therapists and I all thought her episodes were behavior issues due to her Autism. During weeks of potty training, we continuously reminded her that spitting into the toilet while she sat, was not okay. She refused to make eye contact or acknowledge the verbal corrections. She had been going through a spitting phase. She's autistic. It all seemed related. Sadly, those many episodes during potty-time, therapy sessions, and playtime were not related to behavior. At all. They were seizures and instead of being comforted through them, she was gently scolded about her behaviors.

When she was finally diagnosed with Epilepsy, Complex Partial Seizure Disorder and taking daily medications, I couldn't take my eyes off of her. I watched and noted everything she did. I paid attention to even the slightest out-of-context movements, physical or verbal pauses, saliva, change in behavior, and tiredness. Then, one of her triplet brothers was diagnosed with Epilepsy, also. Over time, I became quite confident in my ability to recognize what their seizures looked like, even when they didn't look like seizures. I spent hours teaching friends and family to do the same.

Finally, I stopped being paranoid. Life went back to our normal. Eventually, I weaned them off of medications when they became seizure-free for a length of time. I didn't think about Epilepsy creeping back into their lives, but it did. Now, I'm doing it all over again; the constant watching, notating, and teaching friends and family, while I re-teach myself. I can't rely on my data from a couple of years ago. So, I'm learning what their seizures look like, now.

I don't want any parent to experience what I went through, simply because when they think of seizures, they think of convulsions, and nothing else. During a seizure, a person may experience anything from a blank stare, to movements that seem to be related to whatever the person was doing before the seizure. If you suspect that someone is experiencing seizures, there are a few things you can do to help doctors determine whether or not the episodes are Epileptic.

Here are two example of the many Epileptic seizures I was able to capture shortly after my daughter's diagnosis. On this same day, following the making of these videos, she was rushed to the neurologist's office. During her office visit, she began to seize incessantly and was taken by ambulance to the hospital, where she remained for several days.

Seizures can last anywhere from 15 seconds to 5 minutes. Seizures lasting 5 minutes or more require immediate medical attention and you should call 911.

For more information about Epilepsy and the various types of seizure disorders, check out these links below.

About Epilepsy: The Basics

More:
brainbrain healthParenting neurological disorders neurology
Newsletter Sign Up
Raise the kind of person you'd like to know
Subscribe to our parenting newsletter.
Successfully Subscribed!
Realness delivered to your inbox