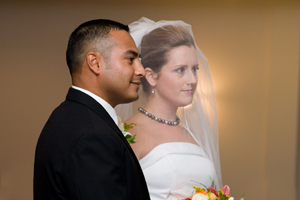 Being that it's an election year with all the talk of marriage equality, like who should have it and who shouldn't, I reflect back on my marriage and what the last two years have been like for me. It was a beautiful day in June 2008 when my sweet boyfriend, Thomas Araguz, surprised me by asking me to go on a day trip with him to a yacht club in Kemah, Tex. We boarded a private sail yacht and set out on a six-hour-long sail day. Three hours into our trip, as the dolphins were swimming alongside the boat, Thomas called me to the front of the boat. As I walked toward him, he knelt down and asked me to be his wife and to spend the rest of our lives together. Without hesitation, I said yes. Our wedding was held on Aug. 23, 2008, in our small-town church in Texas, where we had first met. That day, Thomas and I began our life together as husband and wife, and we never expected that to change.

But on Independence Day 2010, the freedom I celebrated and had come to expect as a married white woman in Texas was about to come to an abrupt end. My husband was a firefighter, and the imminent danger of the job seemed so far from touching our perfect world, much less ending it. That evening, Captain Thomas Araguz entered a packaging plant, and within moments the fire engulfed the building and collapsed on top of him. At that moment my world also collapsed onto me, for that fire not only killed my husband but stripped me of my privacy and my family. In the midst of grieving the tragic loss of my husband, I was forced to fight for the validity of my marriage. Thomas' first wife, Heather Delgado, chose to file a lawsuit in order to invalidate our marriage and thus obtain for herself full benefits as the spouse of a fallen firefighter. Ironically, the court that was now voiding my marriage to Thomas was the same court that had approved my divorce from my first husband after our 11-year marriage ended. Heather and her lawyers decided that I wasn't human enough to deserve equal rights to love and marriage. Because I had lost my best friend and my biggest supporter, Thomas could not help me defend our marriage. The burden lay on my shoulders. Marriage equality never affected me until it affected me.

Suddenly, I was a national headline, and the media attention became relentless. I had endured the fire that killed my husband, and now I had to endure the firestorm spurred by the media's false accusations and, more importantly, an ill-informed public. You see, here is where it gets complicated and where my story becomes even more unique. As a child, I was diagnosed with an intersex condition and partial androgen insensitivity syndrome. Even though I had been identified as male at birth, by the time I was 4 years old, I had clear developmental differences from my brother and sister. Even though my mother consulted professionals in child development, including psychologist Joyce Brothers, few people understood or discussed transgender issues, and certainly not in South Texas. Thankfully, my parents lovingly supported and raised me to be the person I was born to be. By my teens, I appeared and acted just like my female friends. The only difference was that I had that small birth defect that no one even knew was there.

At 18 I changed my name, allowing me to move on with my life like every other young woman. Due to financial constraints, it wasn't until I was 31 years old that I finally had the birth defect removed, in a procedure commonly called vaginoplasty. Finally, after all these years, my body was physically transformed into what it should have always been. My husband and I were very happy, and we continued to live our quiet, normal life, devoid of public intrusion and judgment. But then he died.

Never being one to take abuse or bullying from anyone, the challenge against the validity of my marriage became the most important fight of my life. In 2011 my marriage to Thomas was invalidated based on the assumption that we had a same-sex marriage, even though we weren't a gay couple. In fact, we were a very average heterosexual couple. After the shocking ruling, I fought back by increasing my legal team from one firm of five lawyers to five firms of 18 lawyers -- the best appellate and civil rights litigation I could find. This dream team consists of straight, gay, and transgender male and female lawyers, all committed to fighting for my civil rights and, most importantly, my marriage. If necessary, we will go all the way to the United States Supreme Court. We filed the appeal, and the brief is amazing. Interestingly, the case most closely related to mine and cited within the brief is the historic 1967 Loving v. Virginia case, which resulted in the legalization of interracial marriage in this country. I still cannot understand how my innocent relationship has now become a defining case in civil-rights history. I was never looking to change anything. I was simply living my life, and the moment someone said it wasn't OK with them, I did what I encourage everyone to do: stand and fight for your rights, fight for your love, and fight for your life.

I hadn't expected to become an accidental activist when my husband died, but now I can't imagine doing anything else with my life now but educating the public on transgender, transsexual, and intersex issues while declaring that love is for all people. The case is currently awaiting an appeal hearing in the 13th District Court of Appeals in Corpus Christi, Tex. We expect it to be heard by the panel of justices in the spring of 2013. So in these last two years, the freedom that I had once taken for granted as my inalienable right was stripped away from me and has become the most important issue in my life, and in the lives of so many in our country.

Whether black or white (as in Loving v. Virginia), gay or straight (as in California's Perry v. Brown, the Proposition 8 case), transgender or cisgender (as in Araguz v. Texas), we all deserve equality, the right to love and be loved, and the recognition of that love.