As members of Congress -- as well as one candidate for the presidency -- repeatedly speak about rolling back women's reproductive rights, it's time to take a hard look at the actual status of women in the United States.

Chances are, if the average American woman were stopped on the street and asked, "Do you have equal rights in America under the law?" she would reply, "Yes."

Women were granted the right to vote in 1920 via the 19th Amendment. It prohibited any citizen from being denied voting rights on the basis of sex.

And that's all it did.

[Women of color, especially in the South, often faced de facto barriers to voting until the 1960s.]

The suffragettes realized that the 19th Amendment alone would not be sufficient to prohibit discrimination based on gender. Alice Paul and Crystal Eastman spearheaded efforts to make gender a classification for protection. Paul wrote up the verbiage and it was co-introduced in Congress in 1923 by Rep. Daniel Anthony, Susan B. Anthony's nephew.

Despite being brought before the Congress annually, the amendment got no traction until 1972 when the Equal Rights Amendment (ERA) finally passed in the House and Senate. Ratification required 38 states to sign on.

Before opposition and the 1979 deadline stymied efforts, 35 states had stood firm in their support. Then time ran out.

The amendment was reintroduced in 1982 and has been consistently put forth on a yearly basis. Now, one of it's staunchest advocates, Rep. Carolyn Maloney (D-NY), has teamed up with Rep. Cynthia Lummis (R-WY) to serve as bipartisan co-sponsors of a new ERA Amendment.

Forces are currently coalescing to finish off business that is almost a century overdue.

Jessica Neuwirth, a lawyer and human rights activist, founded and and serves as the president of the ERA Coalition/Fund for Women's Equality. I spoke to her by telephone, to discuss the goals of the organization and her book, Equal Means Equal: Why the Time for an Equal Rights Amendment Is Now. (Meryl Streep sent copies to all the members of Congress with a cover letter asking for support of the amendment. She heard back from five people.)

"We need a culture of accountability," Neuwirth told me emphatically, underscoring that the amendment gives women a remedy for discrimination encased in a legal provision. "It's a matter of principle. It should be set in stone as a fundamental right."

Neuwirth walked me through some basic legalese. However, the bottom line is simple: An amendment to the Constitution would "create a new baseline and measuring stick on the legal landscape."

Cases that appear in front of the Supreme Court, from pay equity to gender violence, usually fail on the grounds that there is no Constitutional basis for protection. The Supreme Court most frequently evaluates sex discrimination claims under the 14th Amendment, using "a lower standard of review" than it does for racial and religious discrimination. This is known as "intermediate scrutiny."

"In order to have inviolable protection, an amendment to the Constitution is needed. It would relieve the necessity of having to prove the intent to discriminate," Neuwirth pointed out. Plainly speaking, when a specific policy is detrimental only to women, then the principle of "equal rights on the basis of gender is violated."

Supreme Court Justice Ruth Bader Ginsburg has said, "I would like in my lifetime to see women get fired up about the Equal Rights Amendment."

The most disturbing rulings emanating from the courts have resulted in a failure to serve victims of gender-based violence. Claims were refuted because there was "no basis of authority for it in the Constitution." An Equal Rights Amendment would yield, "a right to sexual equality that is fundamental and substantive."

In the Equal Means Equal foreword, Gloria Steinem posits with irony, "What would have happened if the Founders actually had looked like the country?"

Getting the ERA passed is not just a concern on the bucket list of second-wave feminists. The D.C. director of the ERA Coalition, Bettina Hager, is a millennial -- and she has plenty to say on the topic.

When we initially conversed, Hager related that her particular wake-up call came when she first experienced sexual harassment. She knew something was off, but wasn't able to put her finger on it until she took a women's studies course in college. She followed up in depth, via e-mail:

"As a woman who was born after the expiration of the 1982 deadline of the ERA, I grew up completely unaware that I was not guaranteed legal equality in the United States. For the vast majority of my life, I truly believed in this false sense of equality. As I grew older I gradually felt I had less power over my own life and experiences, especially in terms of relationships and treatment by my male peers.

In my women's studies courses I realized that these experiences were a reflection of a systemic issue that stemmed from the unequal treatment of women in our society. It is an undeniable fact that women in this country are not protected from sex discrimination to the fullest extent of the law. This plays out in the way women are treated in our society. The fight for an ERA can open the discussion on gender equality at a national level and make it possible to take a closer look into how sex discrimination affects our daily lives.

The Equal Rights Amendment is an important legal tool. The rights women have gained over the past few decades have been through laws and legislation, which can easily be overturned. The legislative process is a temporary guarantee of equality, while the amendment process is a statement of permanence. The issue of gender equality needs to be a permanent guarantee in our legal system."

The ERA Coalition has put together a robust website with action tools. This includes a Pledge Page and an Advocacy Page, which drills down on which elected officials have co-sponsored the amendment. I was more than surprised to see my Senator, Chuck Schumer, in the "Non-Supporters" category. (No shock about Senators Ted Cruz or Marco Rubio). A click on Schumer's name took me to an e-mail formatted letter, allowing me to inform Schumer that "I was concerned to see that you are not a co-sponsor." It noted politely, "I have taken a pledge to support only elected representatives and candidates who support the Equal Rights Amendment (ERA)."

There are direct links to the 114th Congress (2015-2016) resolutions that remove the deadline for the ratification of the Equal Rights Amendment, and the language for the amendment itself.

Section 1. Equality of rights under the law shall not be denied or abridged by the United States or by any state on account of sex.

Section 2. The Congress shall have the power to enforce, by appropriate legislation, the provisions of this article.

Section 3. This amendment shall take effect two years after the date of ratification.

Five years before her death in 1977, Alice Paul said in an interview:

"I never doubted that equal rights was the right direction. Most reforms, most problems are complicated. But to me there is nothing complicated about ordinary equality." 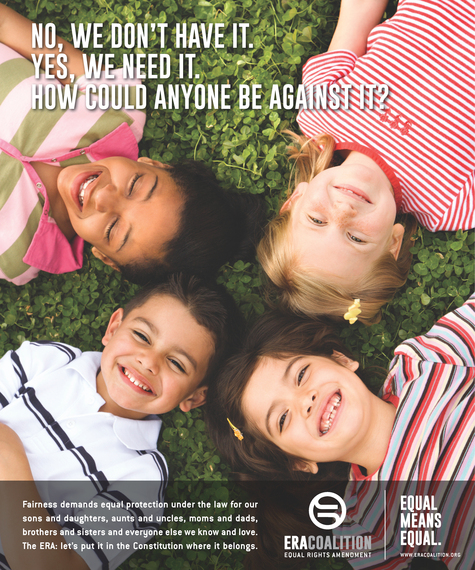